Flight 93 crashed among coal mines. Treating the water there was no ordinary project | StateImpact Pennsylvania

A pump draws water from an underground mine at the Flight 93 National Memorial, sending it to a series of ponds to be treated.

Flight 93 crashed among coal mines. Treating the water there was no ordinary project

'The waters are pumped up to the surface and treated and run through the series of ponds like chambers of the heart.'

Patrick White has spent a lot of time at the Flight 93 National Memorial in Somerset County, and he knows it well: its rolling, forested hills, its stretches of grassland, its rows of mountains in shades of blue.

Over the years, he’s also visited one of the site’s lesser-known landmarks tucked behind reeds and wildflowers: a chain of bright orange ponds that treat contaminated groundwater from old mines before it enters Lamberts Run and, eventually, the Stonycreek River.

“The waters are pumped up to the surface and treated and run through the series of ponds like chambers of the heart,” White said. “It’s natural and able to add to the flowing volume of the local waterways.”

This is coal country, and ponds like these are scattered across the landscape.

But to White and others, the ponds here are different. They were the answer to a problem that briefly threatened the creation of the memorial itself. And even at a distance of more than a decade, how they came to be still carries weight for some of the people who were involved in the work. 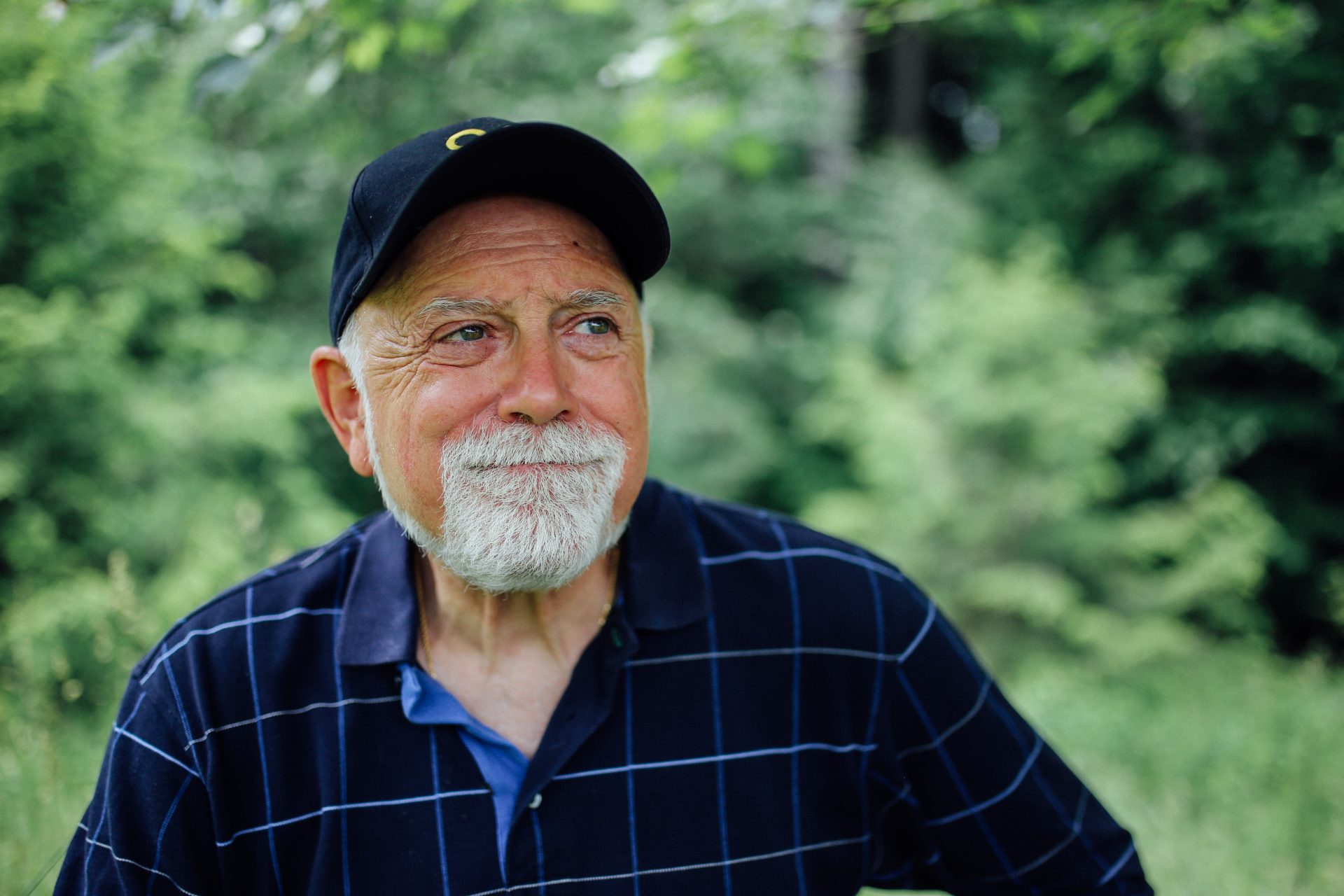 White is a retired lawyer who represented the families of Flight 93’s passengers and crew during negotiations over the tracts of land that would become the memorial grounds. His cousin, Louis “Joey” Nacke, took the flight that morning, Sept. 11, 2001. Those onboard fought the hijackers and stopped the plane from reaching its intended destination, believed to be the U.S. Capitol.

The 757 crashed outside Shanksville, leaving a furrow in the ground and a yearning to honor the plane’s 40 passengers and crew.

White, who also co-chaired the Flight 93 Memorial Task Force and helped lead the nonprofit group Families of Flight 93, said planners wanted to create a place where people could heal.

“There was also this parallel theme that is critically important, and I think the families all agree, of healing the land,” he said. 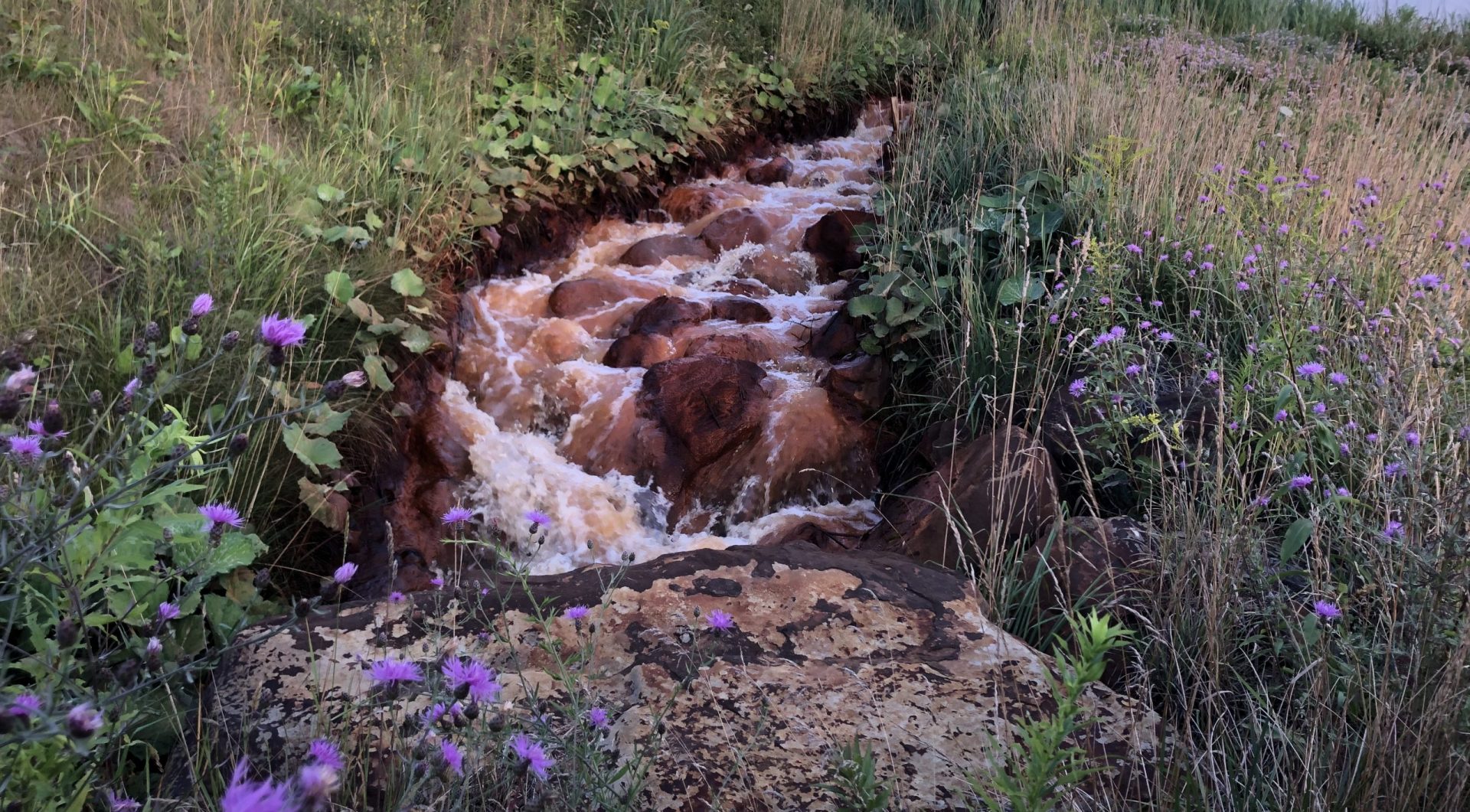 Water flows between treatment ponds at the Flight 93 National Memorial outside of Shanksville before entering Lamberts Run. Slow movement through the ponds allows metals, picked up by groundwater as it passes through old mines, to settle out.

A seep at the sacred ground

The kinds of pollutants that mining sends into waterways differ depending on the mine, but the overall process is the same: rocks that would otherwise remain buried in the Earth’s crust are dredged up and exposed to air and water. That triggers chemical reactions that make the water acidic, allowing it to pick up metals — like aluminum, zinc and lead — as it flows over the rocks.

The water can carry those metals directly into streams, potentially harming fish and other wildlife. For instance, the state Department of Environmental Protection has designated Lamberts Run as “impaired” for aquatic life since 1996 because it’s so laden with metals.

At the time of the crash, the mines around Lamberts Run were owned by PBS Coals, Inc.

They were shuttered soon afterward, and the families of Flight 93’s passengers and crew were looking to buy the roughly 900 acres from the coal company for the memorial.

For that sale to happen, PBS needed to prove it had taken care of any water pollution problems from its mines. Since the 1970s, coal companies have been required to post bonds to hold them accountable for cleaning up their mine sites. Once the state says they’ve done that, the company is released from liability.

Joe Pizarchik, who led the DEP’s Bureau of Mining and Reclamation at the time, said PBS appeared well on its way to fulfilling its requirements in the wake of the crash.

“I figured, ‘Well, it’s going to be released in a couple years, everything’s fine, there’s no problem with it,’” he said.

But in 2003, a DEP inspector discovered contaminated water — highly acidic and heavy with iron and a metal called manganese — at what the families called the sacred ground: the place where their loved ones died.

There would be no water treatment system there.

So PBS built a group of ponds that snakes down the ridge and feeds into Lamberts Run, about a mile and a half from the crash site. A pump pulls groundwater out of an old underground mine, and as that water trickles through the ponds, iron reacts with oxygen in the air and settles onto the bottom.

Pumping the water into the ponds, day in and day out, kept the groundwater level low enough that the seep at the sacred ground dried up.

It was also expensive.

According to Pizarchik, treating that water until no pollution was left was projected to cost between $9 million and $13 million, driving up the price of the land.

“The families did not have that money. They were trying to raise money,” Pizarchik said. “And nobody would give them money because they didn’t have the land, and so they were in a catch-22.” 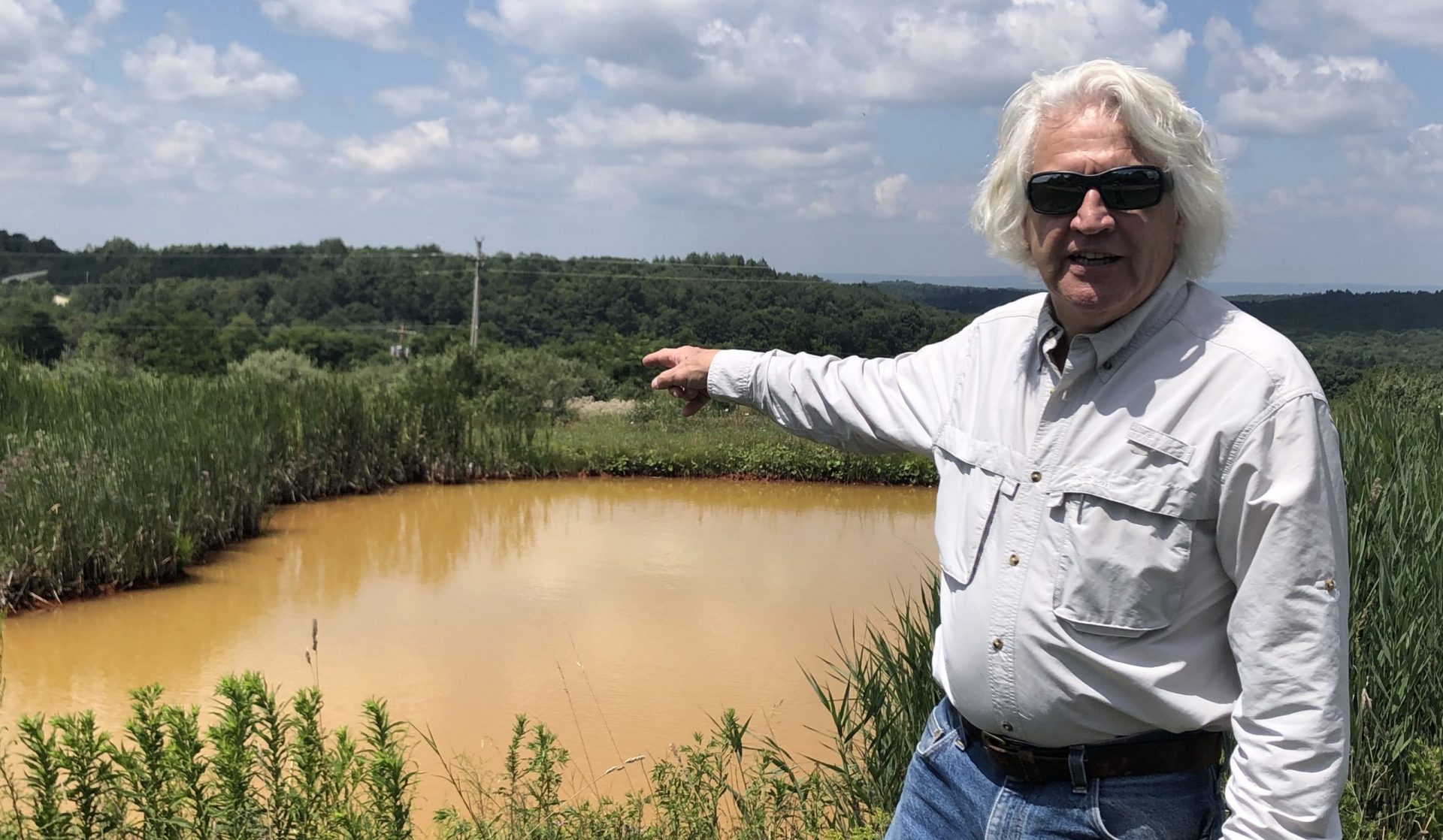 Joe Pizarchik, who served as director of the DEP’s Bureau of Mining and Reclamation during the creation of the memorial, points to one of the iron-rich treatment ponds about a mile and a half from the crash site.

What happened next is the subject of a paper by Lisa Emili, an environmental scientist at Penn State Altoona, and co-authored by Pizarchik.

Studying what happened, Emili said, felt different. “That is the first time I have ever had to deal with something so emotional to do with my research.”

The solution itself was something of a balancing act.

With the future of the site in the balance, regulators did something they wouldn’t normally do: they allowed PBS to stop removing a metal called manganese for one year, while the Fish and Boat Commission watched for impacts on wildlife and water supplies.

Emili said it reported none, so the DEP gave this site an exception; once the company no longer had to remove manganese — the most expensive part of the process — the cost dropped enough for the families to purchase the land.

Manganese has largely been regulated in drinking water because it can affect the color and taste. But research has suggested that chronic low levels of exposure could cause neurological problems, especially in children.

During Pizarchik’s tenure as director of the federal Office of Surface Mining Reclamation and Enforcement, the agency approved a grant that funded the construction of special ponds on the memorial grounds that remove manganese from water.

In recent years, it reports, those ponds have proven able to reduce the amount of manganese to less than what was required before the site got an exception.

But Pizarchik acknowledged back then, regulators weren’t sure what the effects of manganese in the stream would be when they started the one-year trial period. He said it felt like it was the only option left to move the memorial forward.

Letting the mine drainage problem continue to block construction, he recalled, seemed “unconscionable.”

When Pizarchik visited Washington, D.C., to speak with some members of Congress about the issue, staffers he’d never met before approached him. “They were button-holing me in the hallway,” he said, his voice breaking, “asking me to fix this because they were alive” thanks to the passengers and crew. 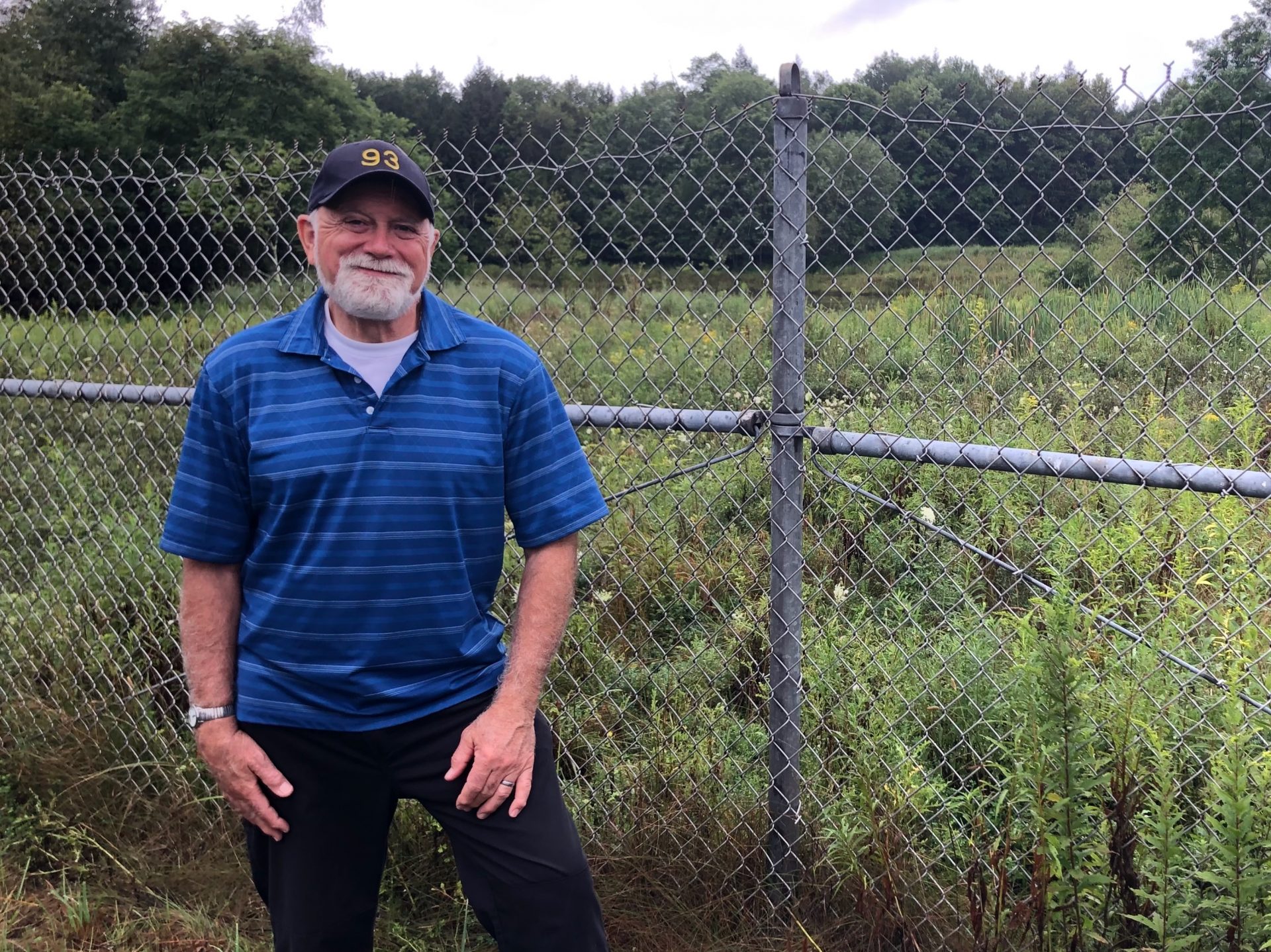 Patrick White, a lawyer who represented the Families of Flight 93 and whose cousin was on the plane, stands near a fenced-off part of the crash site. A contaminated seep of water discovered here in 2003 set off years of negotiations over the future of the memorial. He said he now thinks of the groundwater as the “liquid heart” of the site.

Patrick White stood in a meadow alongside the sacred ground as the rain, which had come down in curtains across the ridge all morning, finally let up.

“It’s healing and growing,” he said, watching a deer bound into the bushes.

It does seem to be. After the storm, the grass and woods thrummed with insect chirps and birdsong.

And according to a 2020 report from the National Parks Service, water quality shows “drastic improvements” as it flows from the memorial into Lamberts Run, and surveys suggest more fish species are appearing in the Stonycreek River.

To White, it’s all part of the cycle.

“In the fall when the leaves turn red, it’s kind of like maybe the lifeblood is draining out for the season, and we’re reminded that there will be a period of cold and dark,” he said. “But in the spring, things will return and renew.”

To walk beside just-planted saplings, to hear the orchestra of crickets in the grass, to see the water starting to clear as it trickles through the settling ponds, is to watch that renewal unfold.