The Flight 93 National Memorial is seen from the visitor center in this photo from July 28, 2021.

The memorial’s designers set out to restore life at the site, and provide a space for healing and reflection in nature. 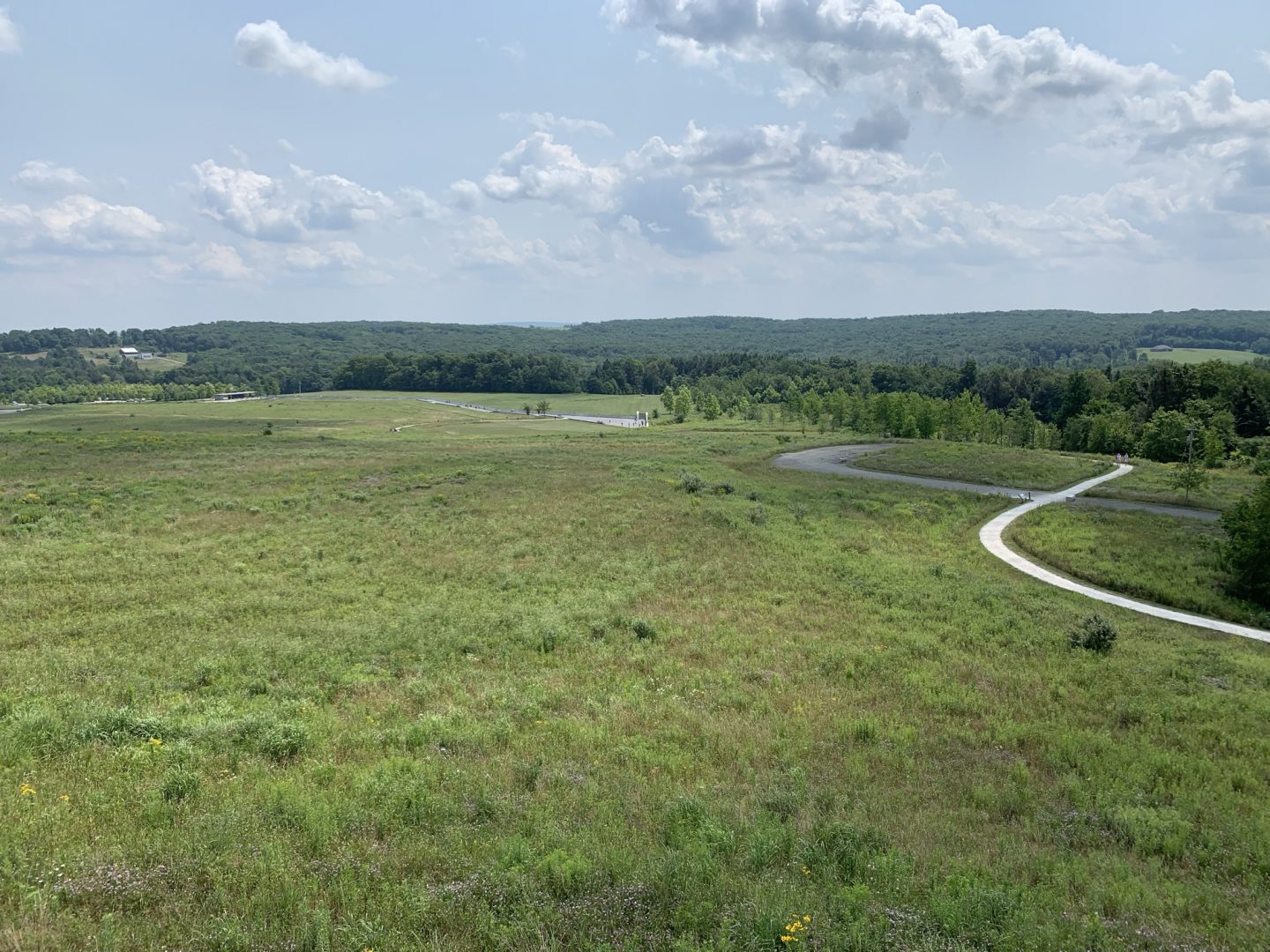 The Flight 93 National Memorial is seen from the visitor center in this photo from July 28, 2021.

Today, the Flight 93 National Memorial in Somerset County is peaceful.

A grassy, windswept meadow stretches from the site’s visitor center seated on a ridge down to the walkway overlooking the plane’s final resting place. In the summer, it blooms with yellow and purple wildflowers. Trails are lined with maples that turn stunning shades of red and orange in the fall. 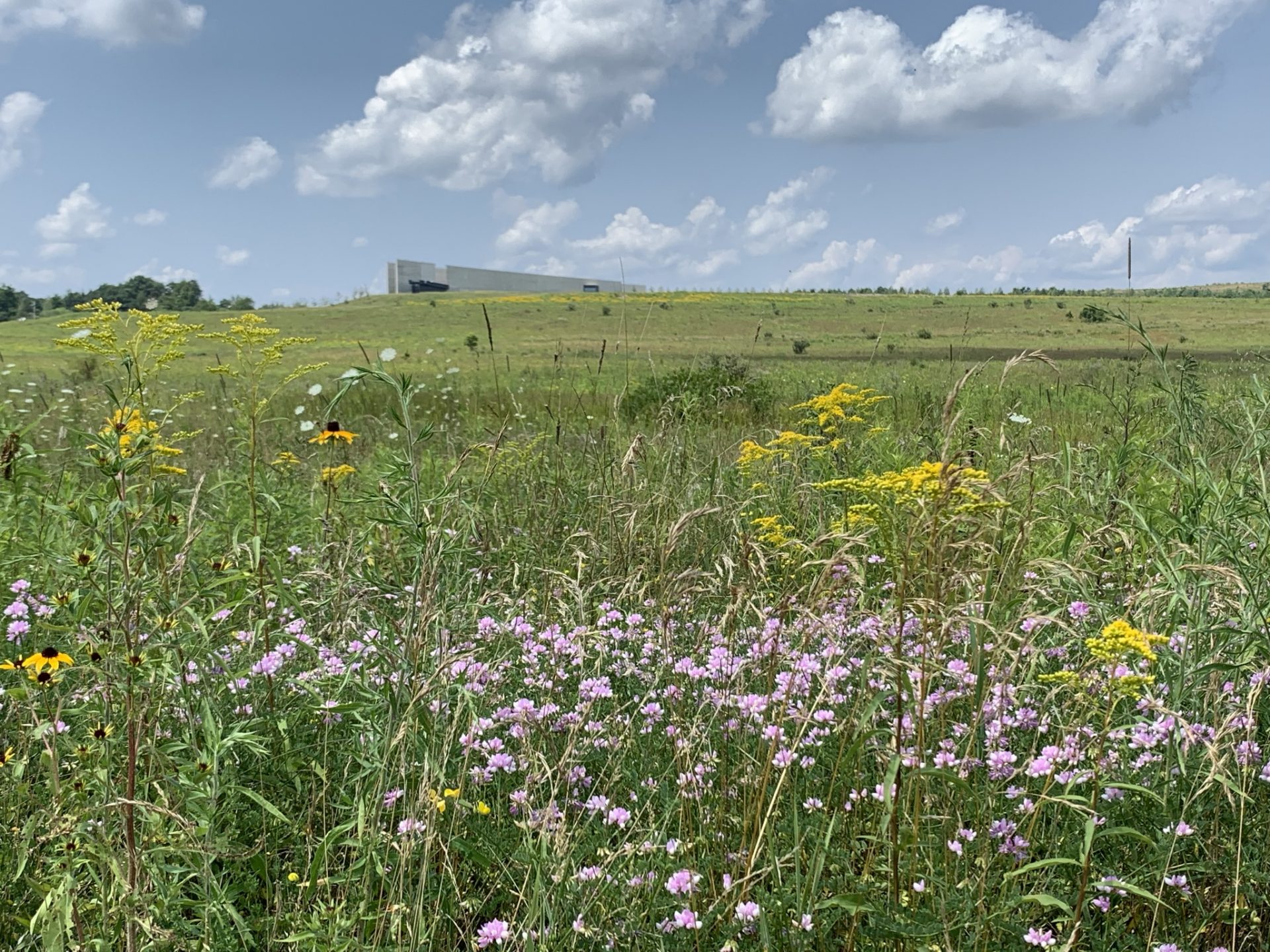 Wildflowers bloom in the grassland below the Flight 93 visitor center on July 28, 2021.

The memorial’s designers set out to restore life at the site, and provide a space for healing and reflection in nature. But maintaining that vision is proving to be a challenge.

The bare field offered an opportunity to the memorial’s creators.

John Reynolds, who chaired the memorial’s advisory commission, said the lack of nature there gave the national memorial’s designers a chance to do things that might not otherwise be done.

“Because there’s nothing there to preserve except the shape of the landscape,” he said.

Reynolds spent his life in national parks; first as a child while his father worked at Yellowstone, then through a more than 30-year career of his own, planning and managing national parks in California and Alaska.

He said one of the most important things about a National Park Service site is authenticity.

“When you come to the site, whether it’s Yosemite or whether it’s Independence Hall or here [Flight 93], there’s some level of authenticity that’s retained,” Reynolds said, “and the authenticity here is: where is the crash site and how is it protected.”

The spot where Flight 93 met the earth at 563 miles per hour sits in a small, bowl-shaped valley. It exploded on impact, charring mature hemlocks and sending debris into the grove of trees.

That area had to be preserved, Reynolds said, to give visitors the context they need to understand the events of that day.

After learning from loved ones that other planes had been used to attack the World Trade Center in New York City, the 40 passengers and crew of Flight 93 fought back against the four terrorists in an effort to retake control of the jetliner, resulting in the crash in Stonycreek Township. Their efforts are believed to have saved the U.S. Capitol.

A large boulder marks the spot where Flight 93 came to a final stop. The front end of the plane exploded into the nearby hemlock grove, which families of the fallen now consider a cemetery. The spot is seen in this photo taken July 28, 2021.

“I would say we would take pretty extraordinary measures to protect the intent of the grove as much as possible and to preserve it.”
— Brenda Wasler

Twenty years after the crash, site managers are working to protect the living memorial from old and new threats.

In National Park terms, the 10-year-old memorial is relatively new. It was created after the park service’s Inventory and Monitoring Network was established, so there isn’t a complete accounting of every plant and animal on site. A Natural Resource Condition Assessment completed by the Western Pennsylvania Conservancy in 2020 offers a baseline of current conditions, though it notes a lot of data for the site doesn’t exist.

That lack of information can be a challenge for Brenda Wasler, the Natural Resource Manager for the National Parks of Western Pennsylvania.

“If I don’t have a clear idea of what I’m managing for, it’s hard to develop an approach,” Wasler said. “A lot of what I focus on is just dealing with what’s in the moment.” 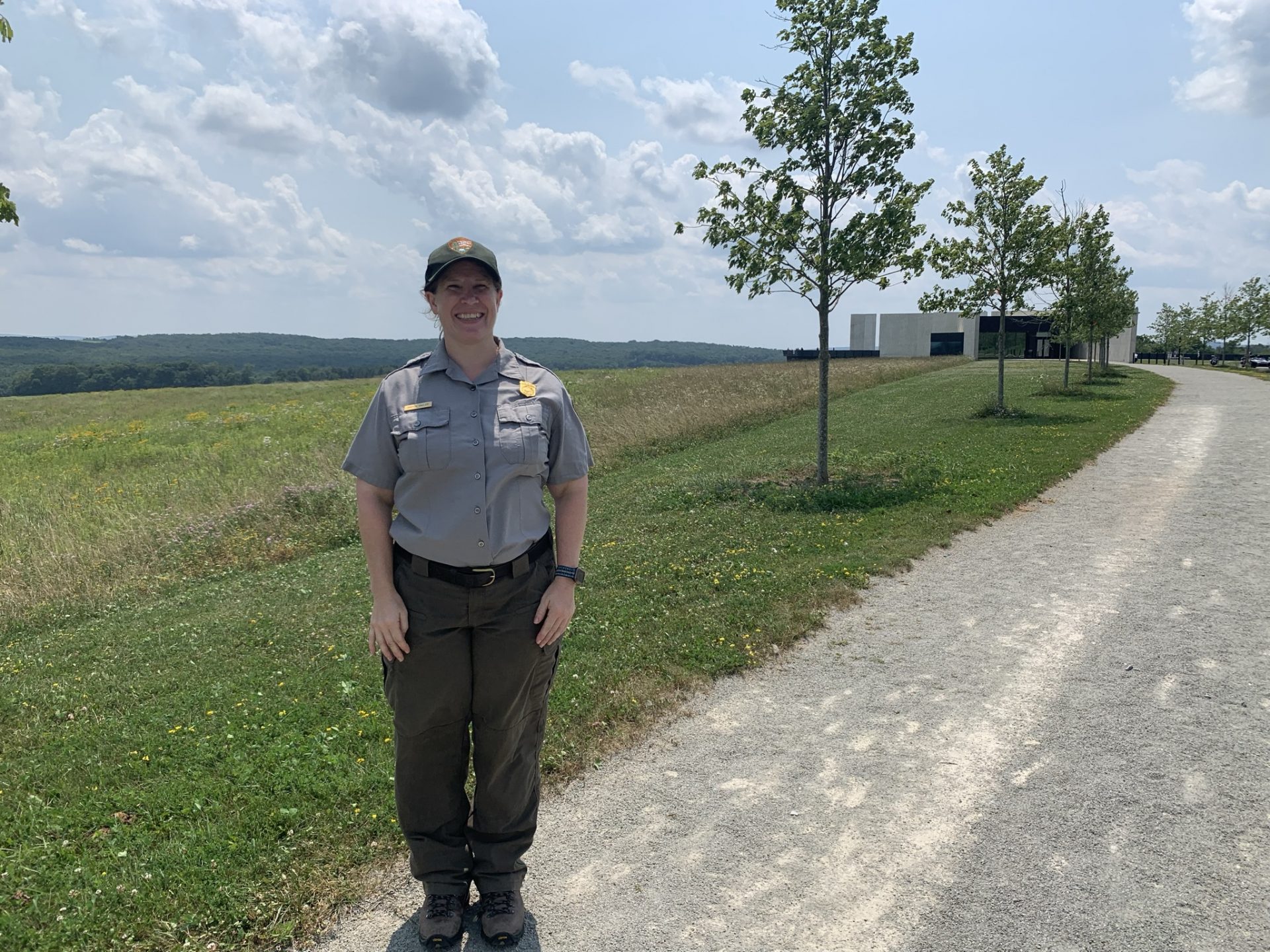 Brenda Wasler, Natural Resource Manager for the National Parks of Western Pennsylvania, stands near the Flight 93 memorial visitor center for a photo on July 28, 2021.

Wasler’s main challenge is the trees, which feature heavily in the memorial’s design.

Wasler said a lot of her focus is on protecting the hemlock grove that absorbed the explosion from the crash. The families of those onboard consider the hemlocks a cemetery and part of what they call “the sacred ground.”

An invasive insect, the hemlock woolly adelgid, is endangering the hemlock grove by feeding on sap from the trees.

They were treated last year and will get another treatment in the coming year. Wasler is even considering introducing a natural predator to try to control the population.

Another invasive insect that can destroy trees, the spotted lanternfly, is not in Somerset County now, though it has been found in neighboring counties.

Wasler said she normally avoids using chemical controls at the site, but the hemlocks are a special case. The goal is to preserve the trees in perpetuity.

“I would say we would take pretty extraordinary measures to protect the intent of the grove as much as possible and to preserve it, but also to not do so much management that it can’t survive without our intervention,” Wasler said. 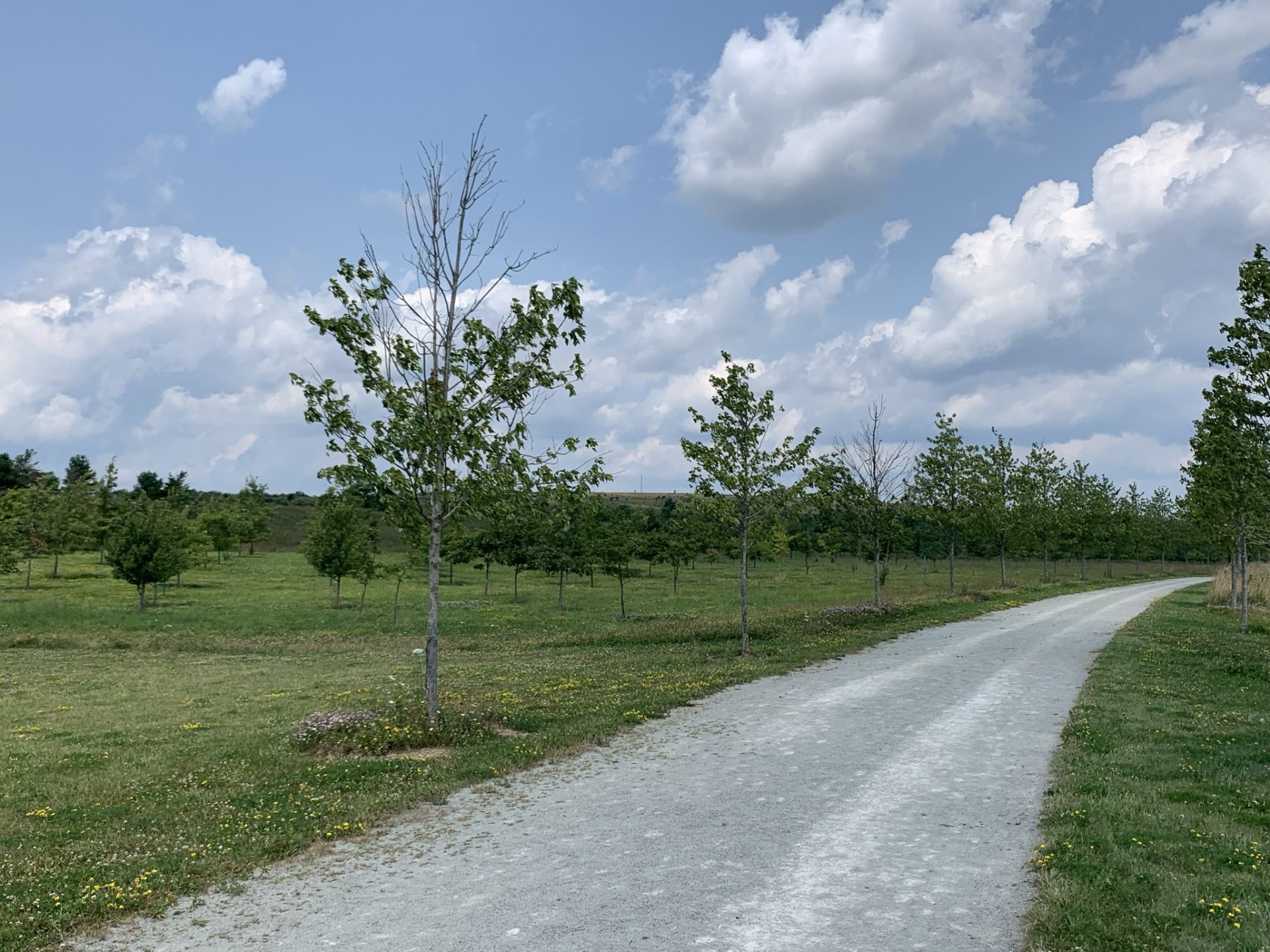 Along the walkway that leads from the Flight 93 visitor center to the crash site, some trees may need to be replaced. A tree with bare upper branches, a sign that it won’t survive, is seen here on July 28, 2021.

Native maples and oaks chosen for their brilliant fall colors were planted both along a walkway that leads from the visitor center to the crash site, and in 40 groves of 40 trees each, which are meant to honor each passenger and crew member.

Some trees in the groves are stunted or leaning nearly parallel to the ground.

“The trees are not necessarily thriving as much as we would like them to,” Wasler said during a recent tour of the site. “This area gets pretty rough weather in the winter — ice storms, heavy snow, heavy wind.”

On top of the harsh winters, trees at the site also have to deal with poor soil quality. Former mining operations at the site damaged the soil, making it harder for native tree species to grow.

Wasler pointed out that the tops of a few trees along the walkway are bare of leaves, meaning they likely won’t survive.

“And then that brings up the question: How do you replace those trees whenever this is supposed to be a uniform experience of trees, but it’s not necessarily feasible to plant a tree of this size?” Wasler said.

With help from Cornell and Penn State universities, Wasler is planning a demonstration plot of new trees, to see which species and soil modifications could help them thrive.

Poor soil and harsh winter winds at the Flight 93 memorial are making it hard for trees to grow at the site, as seen in this photo from July 28, 2021. Forty groves of 40 trees each are meant to honor each of the plane’s passengers and crew members.

“There are now family members who say the most important part of the site to me is that all this nature came back, and it’s very healing to see that.”
— John Reynolds

A chance for growth

Though the mining history hurt the soil at the site, it also opened an opportunity for new habitat.

Over the last two decades, the field surrounding the crash site has become grassland. That’s now the most significant part of the landscape, according to Ephraim Zimmerman, who helped conduct resource assessments at the site.

Grassland is normally unusual for Pennsylvania, but it’s potentially important to a number of pollinators and birds, said Zimmerman, who is the science director for the Natural Heritage Program at the Western Pennsylvania Conservancy.

Zimmerman said grassland birds such as the northern harrier, which the state classifies as threatened, benefit from having the open area.

“They’ve moved in and colonized a habitat that’s been readily unavailable in Pennsylvania,” he said. “So, that’s why we see these [former] strip mines as important habitat.” 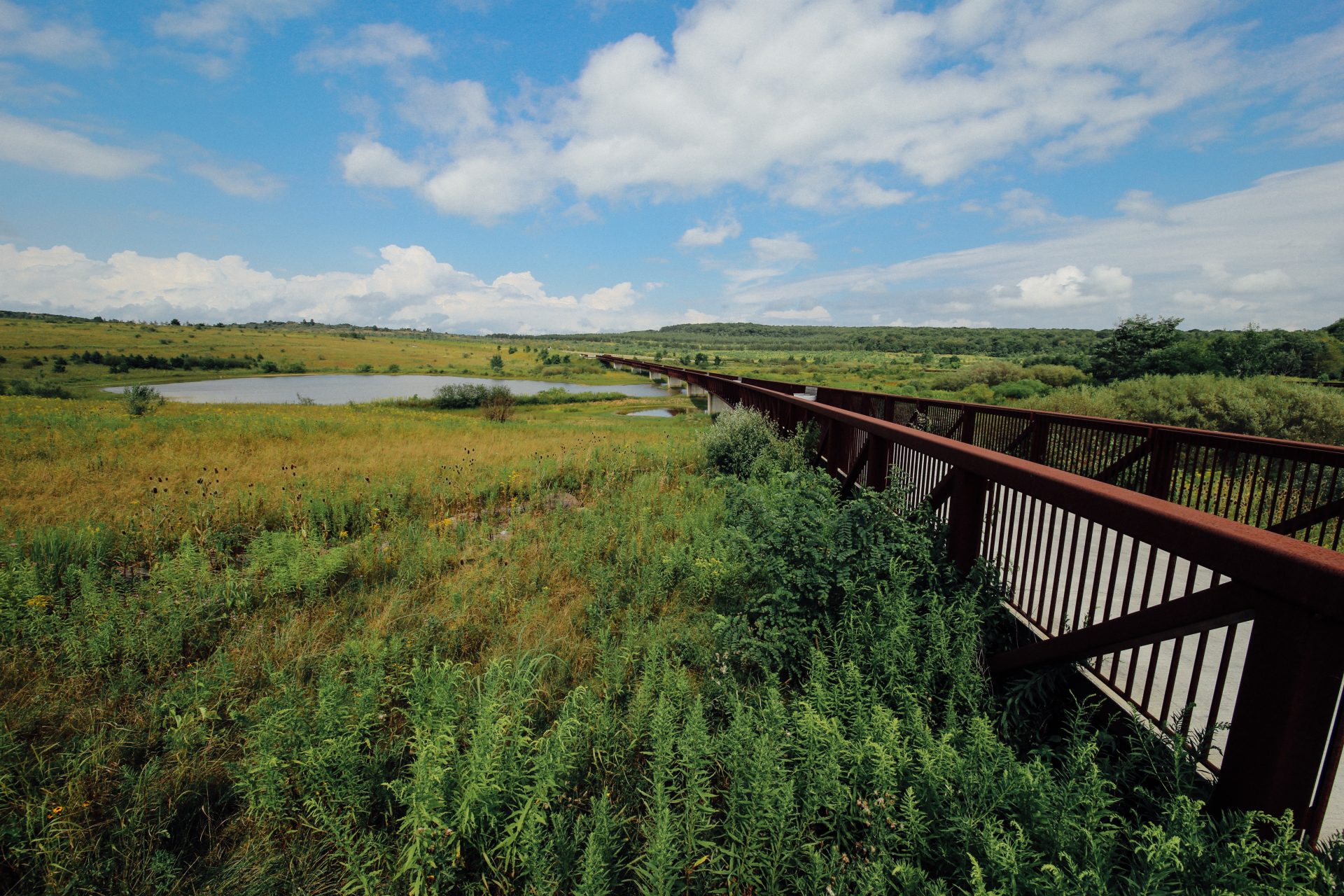 Because the National Park Service is maintaining the site pretty much as it was at the time of Flight 93’s crash, Zimmerman said the grassland won’t grow into forest, so grassland birds will remain viable at the memorial.

Each part of the more than 2,200-acre site contributes something to the surrounding environment.

“Because it’s part of a large connected landscape, this area does have a significant role to play in wildlife conservation in western Pennsylvania,” Zimmerman said.

The land at the Flight 93 memorial had already been scarred by human events before Sept. 11, from a century of logging, farming, and coal mining.

John Reynolds said the landscape dictated how the memorial could be designed. Now, seeing things grow, and people’s efforts to bring the land back to life, is very meaningful.

“There are now family members who say the most important part of the site to me is that all this nature came back, and it’s very healing to see that,” Reynolds said.