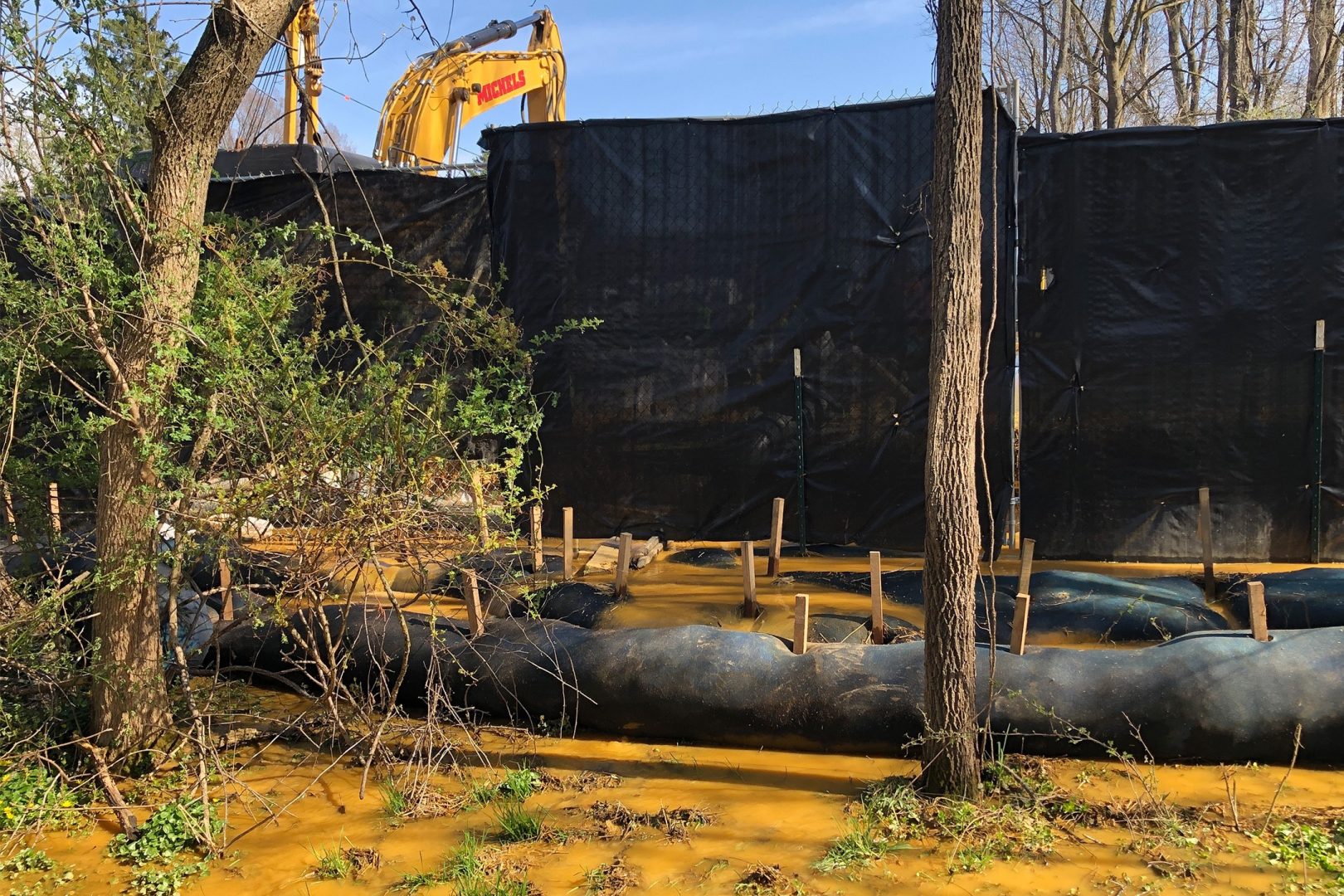 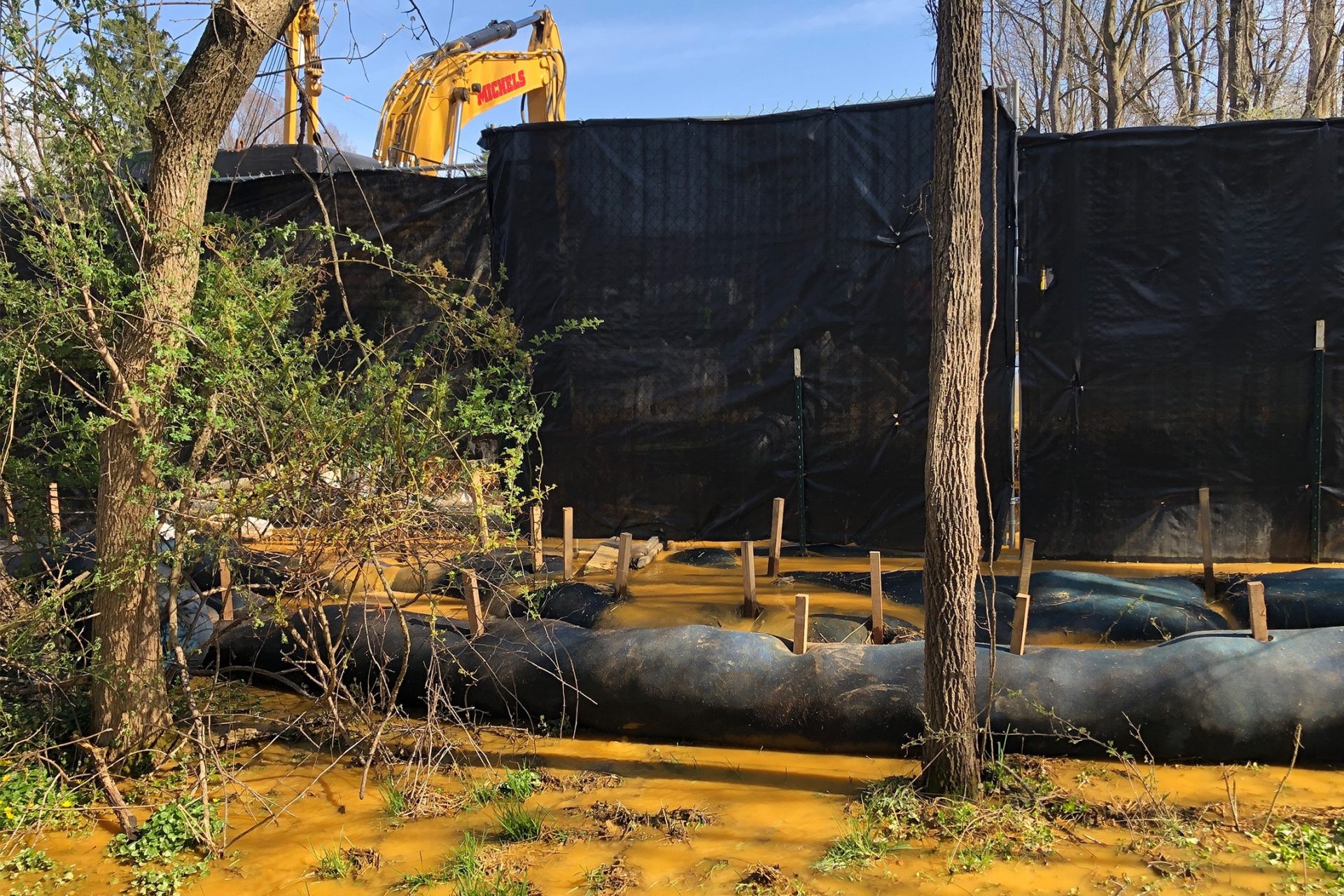 Easter Sunday brought more than chocolate bunnies and spring blossoms to the Meadowbrook Manor neighborhood of West Whiteland Township. Retired schoolteacher Libby Madarasz says one of her neighbors noticed muddy water flowing from beneath a barrier to Sunoco’s Mariner East 2 pipeline construction site. It filled a wetland behind the Chester County Library, across from Exton Square mall, where the clay-like runoff continues to pollute a tributary to West Valley Creek.

Madarasz says she and her neighbors are fed up with the noise from Sunoco’s trucks and construction operations, and the fear that they could lose their homes if continued work causes more sinkholes.

Earlier this week, as she walked behind a row of homes through a wooded area filled with blooming buttercups covered in murky brown water, her feet sank into the ground as if into quicksand. Several blue filtration socks lined the area but failed to catch all the clay particles. Madarasz is frustrated by what she sees as a lack of accountability for a project that she feels moves “full steam ahead” no matter the consequences.

“They come into our town, an out-of-state corporation, and they’re trashing this,” she said. “And I’m sure the question for them is, ‘What’s the worst that can happen? They’ll slap us with a fine, but we’ve got to make progress. So let’s just do this.’”

A statement from the company says the muddy discharge is permitted by Pennsylvania’s Department of Environmental Protection.

“The water leaving the site is colored because of the clay layer through which we are currently working,” the statement from Sunoco said. “It is being filtered through approved erosion control measures. We expect the water to remain this color until we hit a different geology. Additionally, we have an environmental inspector on site 24/7 to monitor the filtration.”

DEP says the company is complying with the permits, which require it to use a series of best management practices to contain the sediment. The mesh in the filtration socks, however, is not fine enough to capture the tiny clay particles, according to DEP spokesperson Virginia Cain.

“Despite what it looks like, there’s no clear violation,” Cain said. She added that it’s unclear why the water continues to flow, and why the remedies outlined in Sunoco’s permit are not working.

Sunoco submitted a new plan Friday to mitigate the flow, which includes using a flocculant to force the clay particles to settle, as well as additional sand filters and sediment filter bags.

Though residents are worried about sinkholes, Cain said there is no connection between the current groundwater flow and the sinkholes that developed on site.

The area lies above limestone, or karst geology. It’s not clear what the company means when it says the water will look as it does until workers hit “a different geology.” But since construction began, sinkholes have developed in this area, including some so large they forced the company to buy several homes on nearby Lisa Drive.

The company has also run into problems with drilling through a region notorious for its complex and tricky geology, and is several years behind schedule.

This stretch of the Mariner East 2 pipeline is one of the last to be completed. The line runs about 350 miles across the state carrying Marcellus Shale gas to an export terminal in Delaware County, where it gets shipped to Scotland to make plastics.

A workaround pipe, using an idled line, is carrying the gas while the new line is completed. There is also the parallel Mariner East 1 line that was laid back in the 1930s to carry gasoline to rural Pennsylvania, and has been repurposed to carry natural-gas liquids. The construction on this route is using an auger bore to create a pathway for the Mariner East 2 between the two lines.

Several sinkholes at this site have developed close to the two operating natural-gas liquids lines and at a nearby valve station. When sinkholes developed along Lisa Drive in 2018, the state Public Utility Commission forced the operating lines near the sinkholes to shut down. An exposed line is subject to cracks or leaks, potentially causing the highly flammable natural-gas liquids to explode, as the company’s Revolution pipeline did after a heavy rain event exposed the line in Beaver County in 2018.

Those incidents weigh heavily on the minds of Meadowbrook Manor residents, Madarasz said. The company’s instructions in case of a leak of the gas, which has no smell, is to run upwind. 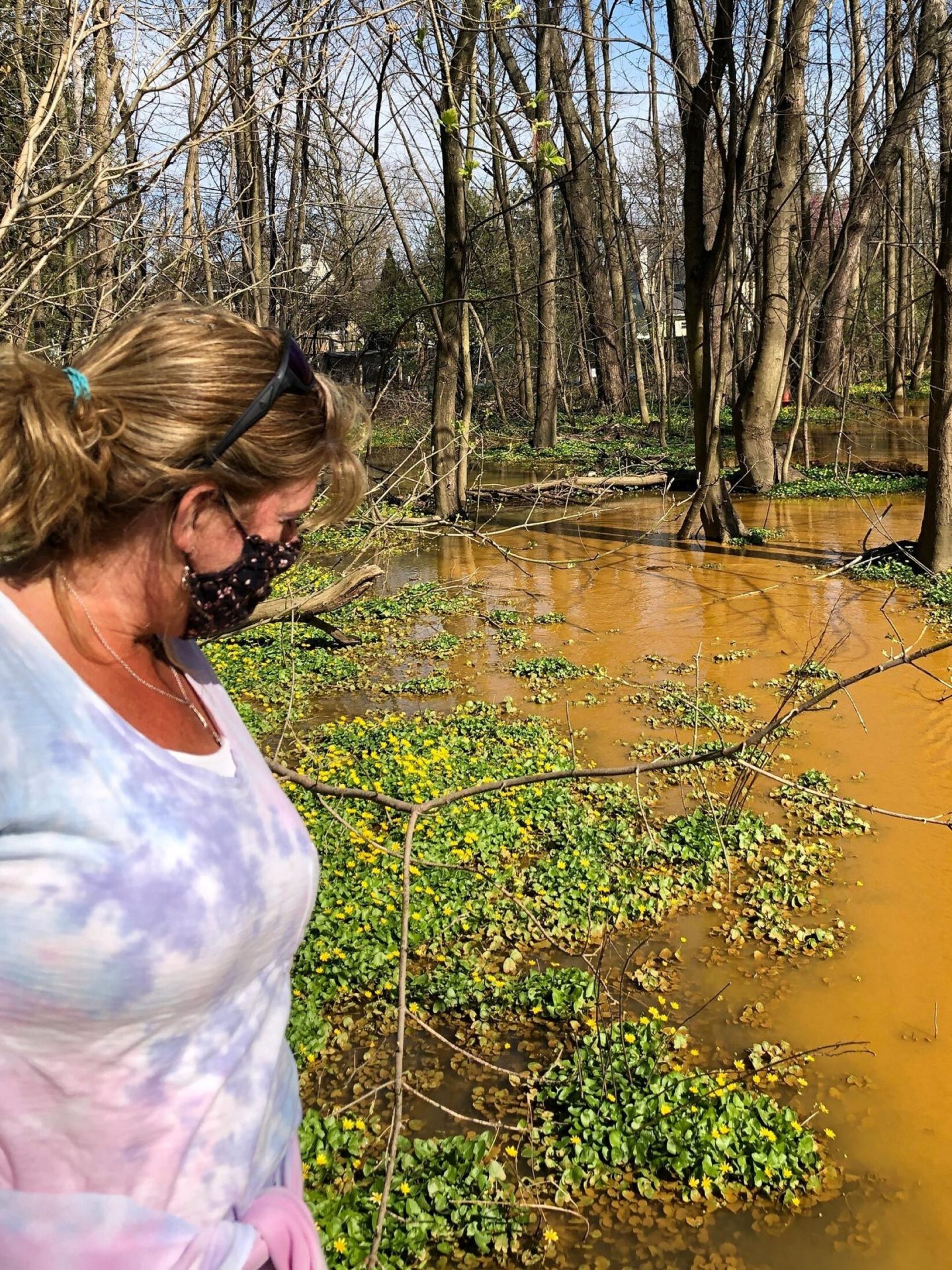 In the meantime, Sunoco is sending a caravan of trucks to suck up as much water as possible. One day this week, the trucks entered a work site behind chain-link fencing covered in black plastic.

“The other day, I tallied and there were 42 that drove by the front of my house,” Madarasz said. “They hold anywhere from 2,500 gallons to 5,000 gallons. It’s full speed ahead. Let’s get through here as quickly as we can, and let’s put up black fences. So if we have a sinkhole, maybe we can fill it before anybody even knows.”

The damage couldn’t have come at a worse time for trout fishermen. The season began just a day before the water started flowing, on April 3. West Valley Creek, which flows into the East Branch of the Brandywine Creek, is a trout-stocked stream.

“It’s ridiculous and it’s been going on for days,” said Pete Goodman, the environmental chairman for Trout Unlimited’s Valley Forge chapter. “It’s choking out the life that lives in the stream as well as the stocked trout further down.”

Though the discharge is groundwater, and not toxic, the clay particles can smother the trout’s main source of food — macroinvertebrates. Goodman said the tiny insects, like mayflies, as well as the trout have a hard time surviving in muddy water.

“From the fisherman’s perspective, why would you bother, it’s like fishing in a cup of coffee,” Goodman said. He too is frustrated by the seeming lack of regulatory authority.

“I’ve watched for the past 20 years as the DEP has been defunded. I think there’s no teeth left in DEP,” he said.

DEP’s Cain said that the agency is reviewing Sunoco’s new plan and so far, there have been no reported impacts to aquatic life.