A stormwater drain in Ferguson Township, Centre County. The township just adopted a stormwater fee to pay for upgrades and repairs in anticipation of more frequent and heavier rains associated with climate change. 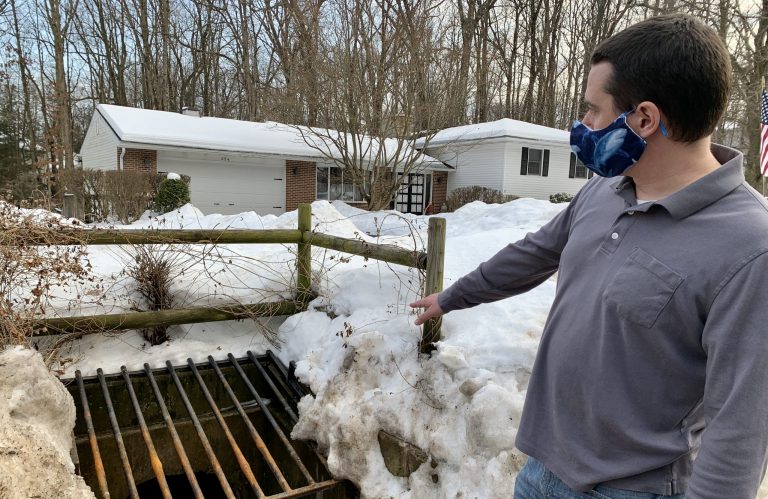 A stormwater drain in Ferguson Township, Centre County. The township just adopted a stormwater fee to pay for upgrades and repairs in anticipation of more frequent and heavier rains associated with climate change.

David Pribulka, manager of Ferguson Township in Centre County, stood on a suburban street in late February, as snow melted and ran down a drain. The township recently adopted a stormwater fee, and he was pointing to one of the projects the fee will help pay for: a badly needed improvement to a drainage way.

“A lot of these storm pipes are undersized. So they become overwhelmed with stormwater particularly after significant rain events and flooding,” Pribulka said. “It’s starting to erode the channel throughout. Much of the channel is immediately adjacent to residential properties, and people that are starting to see their own backyards get smaller and smaller every year.”

Like Ferguson Township, many Pennsylvania municipalities are facing aging pipes and more frequent heavy rainfall that’s testing stormwater systems. Also like the township, a growing number are turning to stormwater runoff fees to avoid too much water causing too many problems.

“We’ve observed in the last several years increased demand on our stormwater infrastructure. Pipes that we’ve sized to meet 20, you know, 50, 100 year storms, are being put under duress by not just the frequency of rainfall that we’re seeing in the Commonwealth, but also the volume that we’re having to contend with,” Pribulka said. 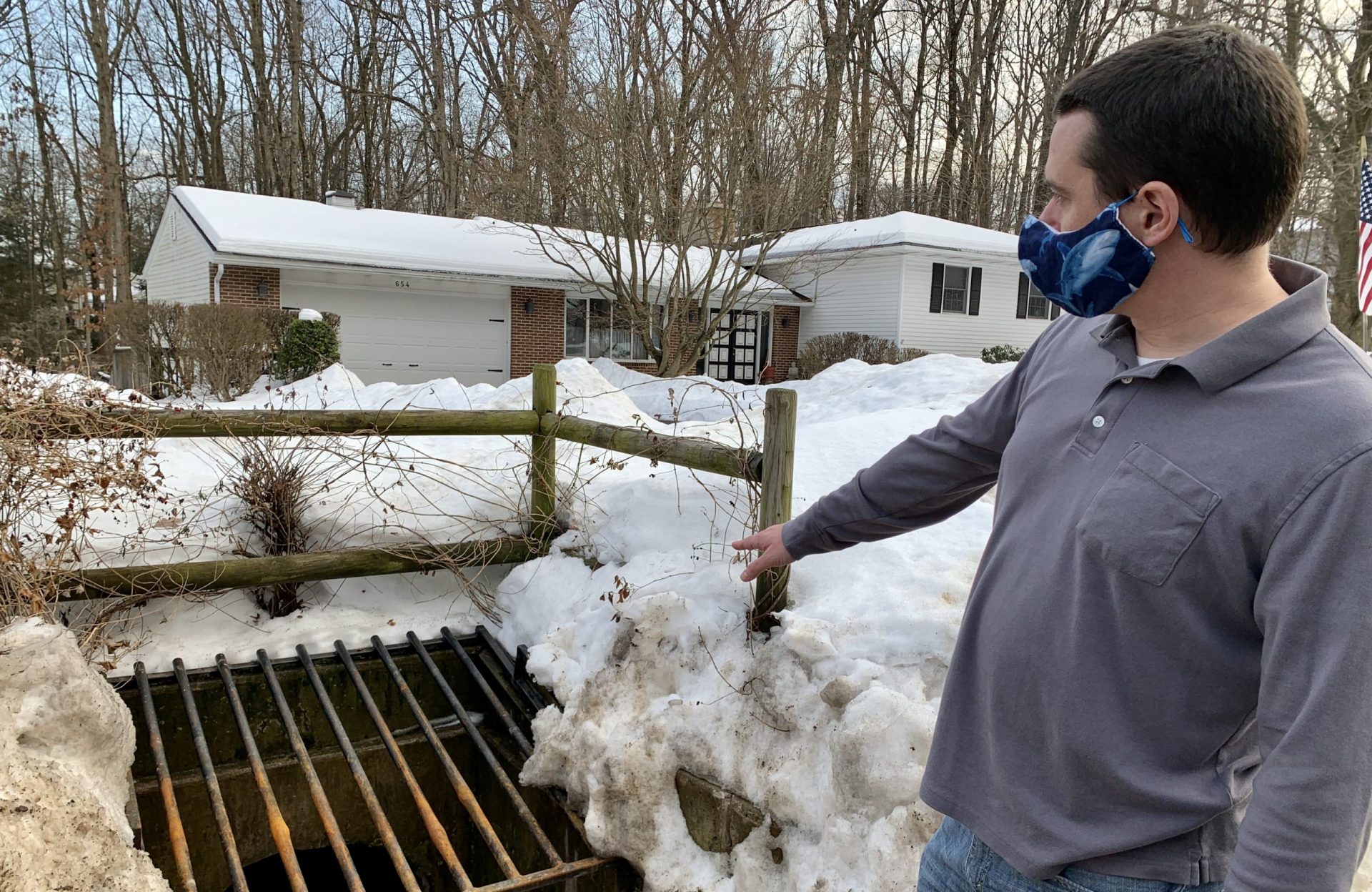 David Pribulka, township manager of Ferguson Township in Centre County, points to snow runoff in February. Aging drain ways will be one of the types of problems the township’s new stormwater fee will be used to address.

The township’s fees, which take effect next year, vary by property type. An average homeowner in the township will pay $119 a year — about $10 a month.

All told, the fee could bring in an estimated $1.4 million to the township. That will help address flooding, erosion, water quality and repairs. It will also help the township meet requirements for cutting runoff to the Chesapeake Bay watershed.

Pribulka said the systems built in the 1970s and 80s weren’t designed for the storms we’re seeing more and more of.

“You look at all the reports on how the impact of climate change will be felt in Pennsylvania,” he said. “And the commonality is that we’re going to start to see an increased intensity and frequency of significant rainfall events.”

The approval of the fee followed years of study and pushback from some residents, who questioned both the timing during the COVID-19 pandemic and the need. Supervisors who supported the fee say it’s better than just raising the tax rate.

Someone facing financial hardship, for example, can have the fee reduced or zeroed out. Nonprofits that meet specific requirements could be exempted. And, property owners can get credits toward their fee by taking steps like installing a rain barrel.

Laura Dininni, chairwoman of the Ferguson Township board of supervisors, said work on the project like the drainage way has been put off for years.

“We’ve got projects like that going on that probably a lot of people don’t necessarily know about, but they’re really important to address,” she said.

In that case, runoff has been eroding the channel and leading to exposed utility lines.

“It’s really essential that we take any and all steps that we can to both mitigate and prepare for climate change,” Dininni said.

Along with just the quantity of runoff is the issue of water quality.

Andy Yencha, a water resources educator with Penn State Extension based in Carlisle, said as water runs across a landscape, it picks up trash, eroded soil, leaked oil, pesticides.

All of that washes into the stormwater systems, and those systems don’t lead to treatment.

“They lead to the nearest natural waterway. So, those pollutants kind of get a one-way ticket through a stormwater system into a stream” and cause damage, he said.

Yencha said reports indicate Pennsylvania will continue to get more precipitation with more heavy rain events likely. But, there is still some uncertainty because there isn’t the same amount of data for rainfall that there is with rising temperatures. That puts planners dealing with aging infrastructure in a difficult place.

Ferguson Township is not alone. According to a survey from Western Kentucky University, Philadelphia was the first in Pennsylvania to adopt a similar fee in 2011. Since then, at least 35 municipalities and authorities have followed — including Harrisburg, Allentown and West Chester.

These Pennsylvania municipalities have stormwater fees, according to a Western Kentucky University survey conducted in 2020:

It might be more common, but that doesn’t make it more popular. The Ferguson Township fee did not get unanimous support from the board. Concerns included enacting a new fee during the pandemic.

Many in the community spoke against it.

Patti Higgins grew up in the township, which is still rural and undeveloped in many places. She and her family live  on 17 acres in a scenic part of the township.

Higgins said she’s sure the stormwater system needs work, but that does not mean the fee has been justified.

“We’d like to know what the cost is going to be. Because there’s no end to the fee,” she said. “They didn’t make it a sunset clause, and there’s no cap, so they could essentially raise the fee every year.”

And she doesn’t think farmers — who already do a lot for stormwater management — should have to pay the fee at all. The new fee and how it was handled prompted Higgins to run for supervisor as a Republican in the upcoming primary.

Yencha, the water resources educator, said nobody likes to pay a fee. He said residential stormwater fees in Pennsylvania range from $5 to $11 a month.

But the majority of municipalities that have enacted a fee already have to meet environmental water quality regulations. He said for them and their residents, it makes sense.

And, he said, paying for improvements sooner could save flood damage — and higher costs — down the road.