These tanks, shown here in June 2019, will hold the plastic pellets produced by Shell’s ethane cracker. According to Shell, 1.6 million metric tons of plastic will be produced there annually.

Company: DOH said it was 'not a compliance audit'

Pennsylvania Department of Health officials visited the Beaver County construction site where Shell is building an ethane cracker in February after an uptick in COVID-19 cases there.

“We do monitor workplaces with multiple cases of COVID-19 and have noticed a recent increase in activity amongst your staff,” DOH epidemiology research associate Molly Nafe wrote to Shell’s lead health, safety, security and environmental official on Feb. 9, in requesting the visit. The e-mail was obtained by the Allegheny Front and StateImpact Pennsylvania through a right-to-know request.

“The visit will consist of a tour of the campus and completion of an infection prevention and control assessment to better understand daily operations and make recommendations to help prevent future transmission.”

Shell spokesman Michael Marr said in an e-mail that three Department of Health epidemiologists toured the vast construction site on Feb. 26 over a five-hour visit. The tour included the site’s “medical facilities, office trailers, lunch tents, work sites and buses.” The majority of the site’s workforce is bused in and out from off-site parking lots at the beginning and end of each shift.

“They met with the full range of project personnel directly managing the site’s COVID controls – including COVID case managers, a nurse practitioner, medical staff, laboratory staff” and health and safety managers, Marr said. “Prior to the visit, DOH representatives explained that the visit was not a compliance audit, a point that was reiterated during the visit.”

Neither the Department of Health nor Shell would say what procedures, if any, were changed on the worksite as a result of the visit.

Marr said that during and after the visit, officials from Shell, the Department of Health, and Bechtel, the multinational construction firm overseeing construction of the $8 billion ethane cracker, have exchanged “information about COVID-19 mitigation strategies.”

A few days before the letter, on Feb. 5, Shell reported 86 cases at its 386-acre worksite, where 8,000 workers are on what is being called North America’s largest construction site. The site, built with a $1.65 billion state tax credit, is expected to begin producing plastic pellets out of the region’s natural gas sometime next year.

For comparison, on March 30, Pennsylvania’s prison system reported 100 active positive cases out of a total population of 37,000.

Department of Health spokeswoman Maggi Barton said in an email the agency couldn’t discuss details on “specific cases, clusters of cases, or outbreaks to protect privacy of individuals” under state law. She said state and local officials “have worked with various facilities across the state to mitigate spread and provide assistance as necessary to support outbreaks throughout the COVID-19 pandemic response.”

By then, construction had restarted after a two-week shutdown in March 2020 intended to prevent the spread of the virus. 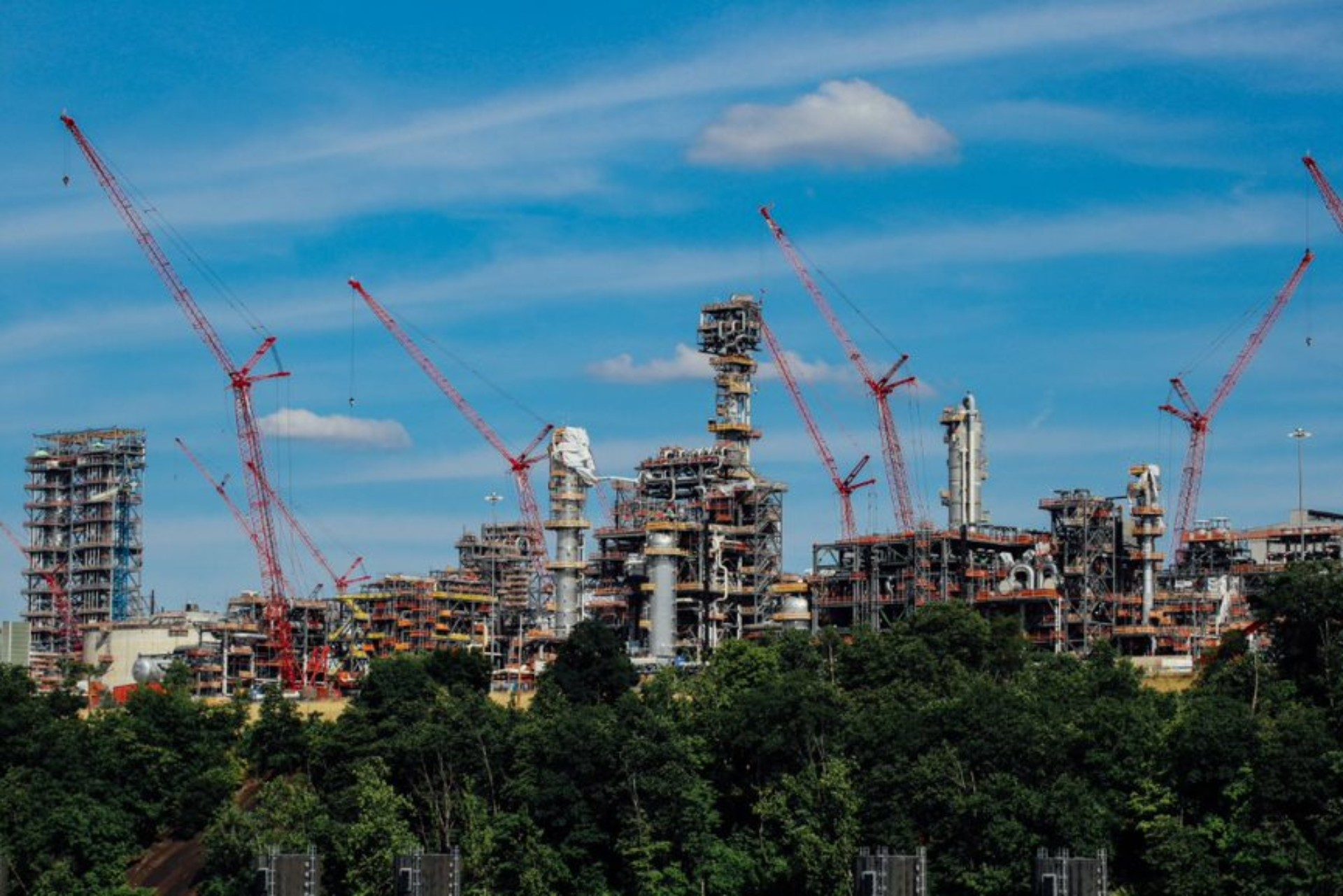 A few weeks before reaching out to Shell to schedule the visit, Department of Health staff planned to consult with National Institute of Occupational Safety and Health industrial hygienists Dr. Kendra Broadwater and Eric Glassford about the Shell plant, the emails show. An agenda for the meeting listed several topics, including ventilation in structures and vehicles, places of congregation, and PPE policies, as well as basic information about ethane cracker facilities.

There are no federal or Pennsylvania laws regarding COVID workplace safety protocols. The Occupational Safety and Health Administration has a list of construction site guidelines, including recommendations on social distancing, the use of PPE, and monitoring employees’ health symptoms. A federal emergency standard — called for by President Biden in January — has yet to be implemented.

Shell has put policies in place to try to prevent the spread of COVID since it began a year ago. The company has an on-site COVID testing lab operated by Monroeville-based RJ Lee Group. Any new worker or visitor must obtain a negative COVID test before they can enter the site.

Also, the company has staggered lunch times, installed Plexiglas dividers at lunch tables, where only two workers per table can eat at a time, and issued a mandatory mask wearing policy.

Yet photographs obtained by the Allegheny Front and StateImpact Pennsylvania show that policy isn’t always followed. The photos, provided by a Shell plant worker who wished to remain anonymous, show workers on a bus and in front of a vending machine without masks on. StateImpact is not publishing the photos in order to protect the identity of the person who took them.

Marr said all personnel on site are required to wear masks “on buses and in lunchrooms when workers are not actively eating. Instances of non-compliance are infrequent, but are immediately addressed when observed or reported.”

Public health experts say companies like Shell that are overseeing construction projects should be doing more to enforce mask policies.

“Without face coverings, in an environment such as we’re in now, it’s likely that you’re going to get cases, you’re going to get exposures in your workforce,” said Dr. Amesh Adalja, an infectious disease expert and senior scholar at the Johns Hopkins University Center for Health Security.

Adalja said it was more challenging with a workforce as large as Shell’s, often made up of specialty trade workers commuting to Pennsylvania from other states for weeks or months at a time.

“If you have 8,000 people there, it becomes increasingly difficult to do that. So you need to really have an aggressive mitigation program.”

Marissa Baker, assistant professor in the Department of Environmental and Occupational Health Sciences at the University of Washington, said it’s difficult to enforce COVID protocols in the construction industry. In addition to having a variety of trades, employers, and contractors on a site, there are often tasks and workplaces where social distancing isn’t possible. Still, she said, the onus should be on the company, not the individual worker, to ensure a safe workplace.

“That’s the fundamental tenet of the federal (Occupational Safety and Health) OSHA law,” she said.

Baker said the rate of infection at the plant suggests the virus is spreading at the site.

“There’s probably some evidence of person to person spread at work, it’s not just all separate people bringing it into work,” Baker said.

She said Plexiglas dividers like the kind Shell has installed “have been pretty well documented to not be protective” from COVID because the virus can attach to aerosols that can float above those kinds of barriers.

She said a more effective approach would be to enforce mask mandates, and ensure good air flow in enclosed spaces and on buses.

Lee Newman, director for the Center for Health, Work & Environment at the Colorado School of Public Health, said some meatpacking plants have slowed the spread of the disease by implementing sick leave policies, because they encourage sick workers to stay home.

“Taking away that financial pressure is going to be really important,” Newman said. “And you can say whatever you want to about, well, you want a tight budget, et cetera. At the end of the day, we’re talking about people’s lives here and ultimately whether you can keep your work site open.”

Ken Broadbent, business manager of Steamfitters Local 449, which has 2,700 members working at the Monaca, Pa. site, said paid sick leave was not part of the contract his union and others on site are working under. That contract was negotiated before COVID-19. But Broadbent said he was skeptical paid sick leave would work financially for a construction project.

“We’re always in favor (of) people if they’re off sick, getting paid,” Broadbent said. “But when you’re talking construction, you’re talking (about) bids and it costs money. There’s only so much you can do to be practical at times, too.”

Broadbent said he supports the changes that Shell has made since the pandemic began, and that worker safety appeared to be a priority for the company.

He said it isn’t just the Shell plant that is having problems with COVID — other worksites are struggling over the same issues.

“With COVID, no one knows what the rules are or what to go by, because it’s…relatively new,” he said.

Correction: The original version of this story incorrectly stated the rate of infection at the plant.

Injection wells exist to hold fracking wastewater — but the water can move. Here's how