A truck carrying fracking wastewater at an injection well in Morrow County, Ohio in 2015.

Injection wells exist to hold fracking wastewater — but the water can move. Here’s how

A truck carrying fracking wastewater at an injection well in Morrow County, Ohio in 2015.

Salty wastewater produced by fracking for oil and gas has to go somewhere. Often, it’s injected into disposal wells deep underground. But sometimes that wastewater can find its way back to the surface and cause environmental problems.

How? We turned to three experts to find out.

The layers of earth beneath Ohio and Pennsylvania are evidence of the region’s natural history over hundreds of millions of years.

“Things get wet, then they get dry. They’re lakes and then they’re deserts. That’s our past, that’s our future,” explained Tony Ingraffea, professor emeritus of engineering at Cornell University, who has worked with the energy industry.

Those “lakes” were salty water, and the mud and silt at the bottom were compressed over time into layers of the flaky, but tightly packed rock called shale.

Meanwhile, on the surface, this region became more like a desert.

“And what do you have in a desert?” Ingraffea asked. “Sand.”

Sand accumulated for many millions of years, creating a hard, but porous rock called sandstone. The cycle repeated many times, resulting in layers of shale and sandstone.

Dead fish and plants caught in the shale layers eventually transformed into natural gas and oil, which over time migrated from the shale and became trapped in the pores of sandstone, creating reservoirs of oil and gas.

When people first started drilling for oil in the 1800s, they found it in the sandstone layers.

The many, many wells in Ohio and Pa.

In Pennsylvania, hundreds of thousands of oil and gas wells have been drilled; in Ohio, tens of thousands. Often, if they stopped producing, they were abandoned.

“Pennsylvania and Ohio are the two states with the oldest wells and probably the highest density of wells, especially these really old wells,” said Susan Brantley, professor of geosciences at Penn State University, who studies the movement of fluids underground.

In recent years, another type of well has become common: fracked shale wells, which can be drilled to 9,000 feet or more below the surface.

According to Brantley, about 12,000 fracked shale wells have been drilled in Pennsylvania in the last 15 years or so. Drillers use millions of gallons of water mixed with sand and chemicals at high pressure to crack the deeper Marcellus and Utica shale formations, releasing the oil and gas.

Salty wastewater called brine also flows up to the surface.

That chemical-laced wastewater can be toxic and radioactive.

Often it gets disposed of in another type of well: disposal wells, called Class II injection wells, where wastewater is injected back into the earth.

Pennsylvania has only nine of these, with a handful more on the way. That leaves millions of gallons of Pennsylvania’s waste that are trucked to Ohio’s 226 injection wells.

Injection wells, oil and gas wells, and older, abandoned wells are often all in one area.

“When you have this many wells in the landscape that makes the landscape Swiss cheese,” said geologist Terry Engelder, Penn State professor emeritus. Engelder’s work, indicating how much natural gas might be accessible by fracking, earned him the nickname “Father of the Marcellus Shale.”

Injecting wastewater into underground rock layers could create problems if there are a large number of wells in the vicinity.

Consider porous sandstone, which has tiny spaces in the rock. Liquid under high pressure like fracking wastewater can find those spaces in the sandstone and travel underground. And if the wastewater meets a well, it can rush up to the surface.

That movement is called migration.

In part to avoid migration, injection well operators in Ohio and Pennsylvania are required to identify and possibly plug abandoned wells up to a half-mile radius, although two recent cases show that wastewater can travel much farther than that.

Just last month, an unused gas well in Noble County, Ohio started spewing salty brine water. According to the Ohio Department of Natural Resources (ODNR), more than 1.5 million gallons of the wastewater were collected, but not before enough escaped into a nearby creek to kill fish and salamanders. 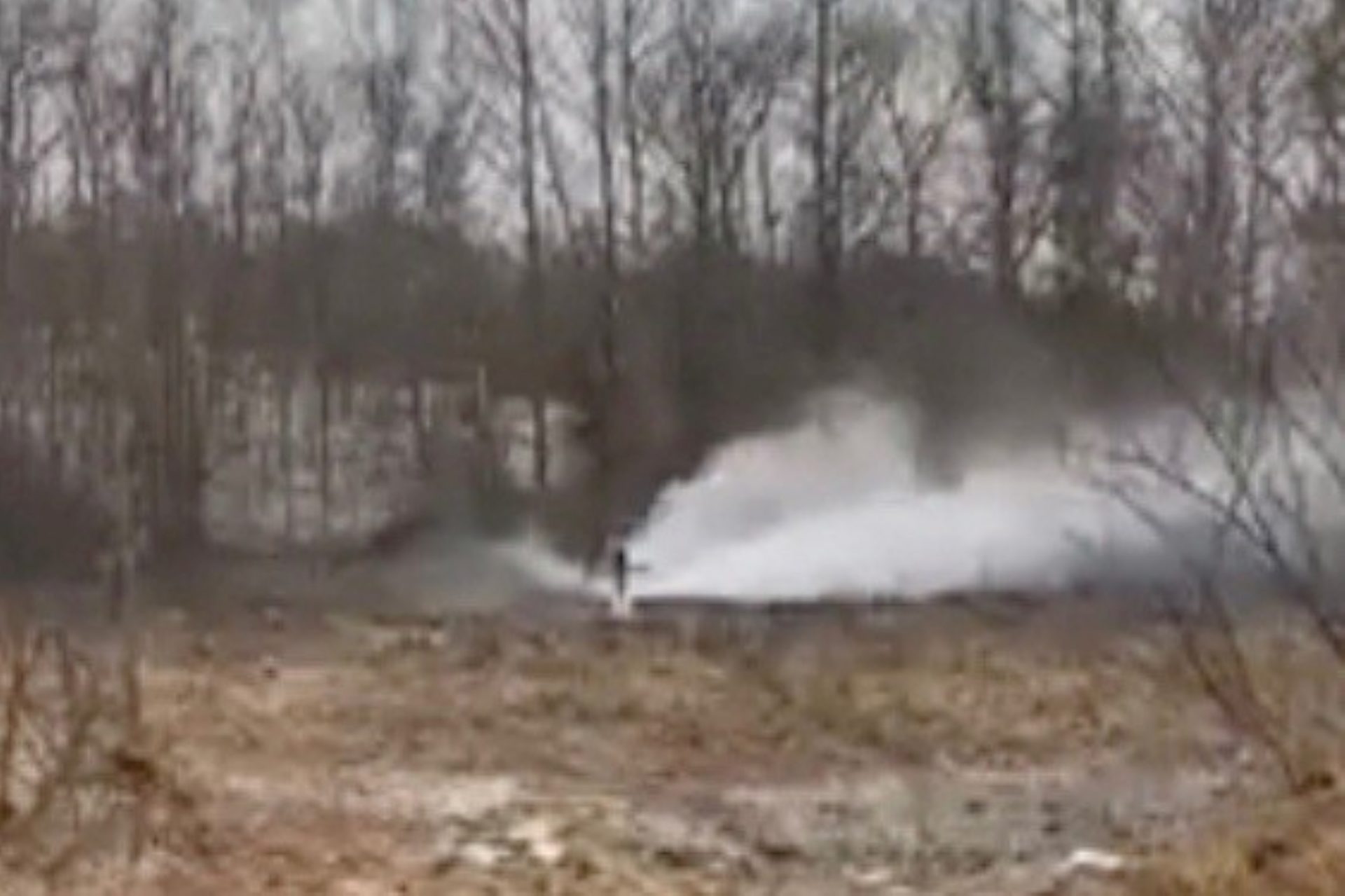 This screenshot from a video posted to Facebook by Amber Deem shows what she claims is the gas well spewing what’s suspected to be wastewater from fracking operations.

Engelder examined state records and thinks that brine spray was wastewater from a nearby injection well.

The injection well and the unused well were drilled into the same underground rock formation, a sandstone layer nearly 6,000 feet underground.

“It flowed along the Medina [sandstone] 2.54 miles, and then back up,” he said. He also theorized that the wastewater could have come from another injection well in the Medina sandstone nearly four miles away.

He looked at a sample of 35 injection well depths in Ohio and found many were drilled to the Medina sandstone layer, the same layer as many older, abandoned oil and gas wells.

In another migration incident in 2019, in Washington County, Ohio, ODNR concluded that brine from an injection well drilled into shale migrated into an adjacent layer of sandstone, contaminating multiple gas wells five miles away.

What about the drinking water supply?

Engelder does not think migration creates concerns for drinking water.

“The modern [injection] wells are deeper, further from the water table,” he said.

In the brine migration incident in Washington County, Ohio, the deepest part of the water table is 150 feet beneath the surface. The wastewater brine was injected a few thousand feet underground.

The state investigation concluded that while brine moved from a layer of shale into sandstone, it was not likely to move into the more shallow drinking water sources, “due to the composition of the rock layers.” ODNR recently hired a consultant to confirm this conclusion.

But if an oil and gas well that’s contaminated with this brine has cracks in the casing, could the brine leak out and contaminate the water table?

Not likely in newer oil and gas wells, according to Engelder, because they are constructed with a vertical stainless steel core, encased in cement. “The cement is pretty good, and it’s not going to fail,” he said. “This is a well that was designed for high pressure.”

But Penn State’s Brantley said that many older wells in Ohio and Pennsylvania were not built to those standards.

“The older the well, the higher the likelihood that there could be some cracking in the cement,” she explained, causing a risk of groundwater contamination.

She pointed to the Noble County incident, where brine migrated to an older, unused well and came up to the surface.

“[The older well] is going through the freshwater zone, and then the brine came back up through the well,” she said. “This is an old well, so I don’t know how well cased it is.”

However, there is no evidence that brine wastewater contaminated groundwater in that incident.

Ingraffea, from Cornell, expects more injected wastewater to find its way to the surface.

“Because the more holes you drill in the ground, the more injection wells you have, and the more wells that you have that are being abandoned but not properly plugged, the higher the probability that the events that you’re witnessing in Ohio are going to be repeating again and again,” he said.

Brantley isn’t as concerned. “I’m not really sure you can say that there’s so many wells that they’re just going to start spewing all over the place,” she said.

But with all the fracked shale wells now, she’s not sure how regulators can prevent brine migrations to the surface.

“You’ve got 12,000 new wells, and then you may have hundreds of thousands of old wells. What would due diligence be?” she asked. “How many people would you need with feet on the ground looking at this to really figure it out precisely when we cannot predict where a fracture is going to go?”

Modern fracking in these ancient shale layers quickly took hold in the industry, but people are still learning the impacts of all the waste it creates, according to Brantley.

“We innovate faster than we can figure out what the implications are, that is just a true statement about humans, right?” she said.