Climate change threatens Pa.’s farmers. How growers treat their soil could help them adapt — and benefit the rest of us, too | StateImpact Pennsylvania Skip Navigation

Dave McLaughlin's farm fields, seen here on January 13, 2021, are almost always green because of his use of cover crops. 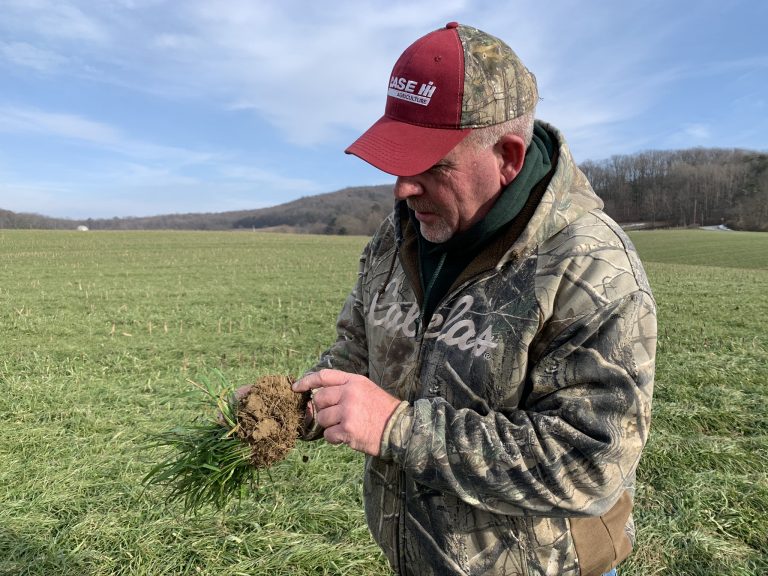 Dave McLaughlin's farm fields, seen here on January 13, 2021, are almost always green because of his use of cover crops.

Rain can be friend or foe to a farmer. It all depends on how much is falling.

Record rainfall in 2018 caused problems for growers across Pennsylvania, and some were hit harder than others.

Helrich has been running the vineyard and winery for 20 years and said every year has different challenges. But now he’s noticing more freak weather.

Climate scientists say you can’t attribute any one weather event to climate change, but global warming is making extreme weather events more likely. Pennsylvania, itself a large emitter of greenhouse gases, is starting to see it in the form of heavier rain.

The more sensitive parts of Pennsylvania’s agriculture industry are already under threat from climate change and growers are looking for ways to adapt.

Some adaptation techniques focused on soil health also draw greenhouse gases from the air and trap them underground. That has some advocates — including the Biden Administration — looking to so-called “regenerative agriculture” as a big part of the climate solution.

To farmers, the focus is less on trying to solve the climate crisis and more on keeping their businesses going. 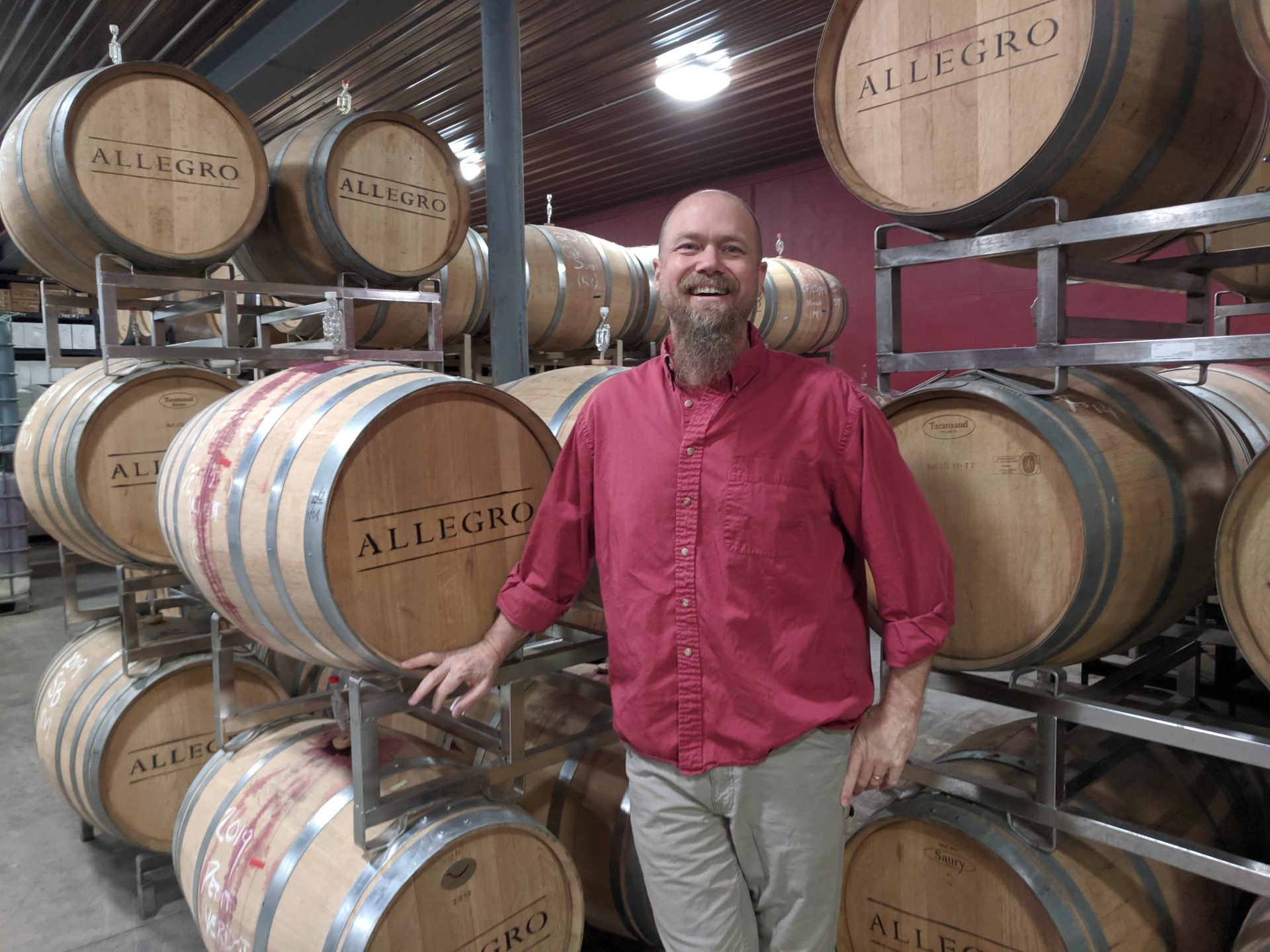 Carl Helrich, owner of Allegro Winery in York County, poses for a photo in the winery’s barrel room on March 6, 2020. 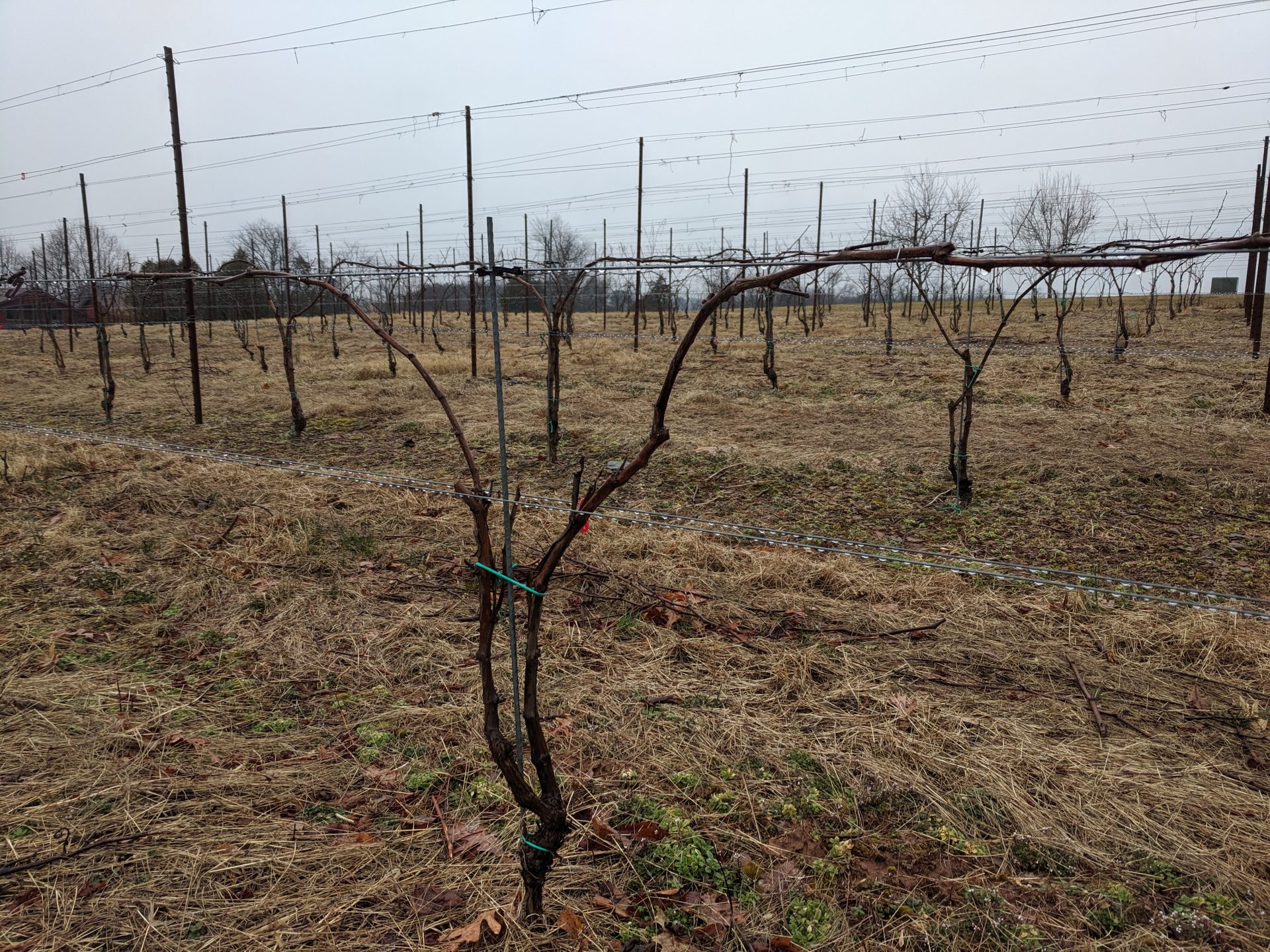 Grapevines outside Allegro Winery are seen here on March 6, 2020.

Many farmers hope to pass their farms down to the next generation — a sentiment that’s especially poignant for certain fruit growers, who are handing down not just land but the plants themselves.

A saying in winemaking goes that “vineyards are planted for your children,” Helrich said, because mature grape vines make for the best wines.

“And so trying to figure out what we should be planting today, based on the fact we’re trying to make really great wine 10 to 20 years from now, it’s become really difficult,” he said.

Helrich said it can cost between $10,000 and $30,000 an acre to plant a new vineyard. He can’t afford to start over every couple of years, so he’s trying to find varieties that will be able to cope with Pennsylvania’s weather extremes.

He said they’re starting to pull out MacIntosh trees because, these days, it doesn’t get cold enough, soon enough in the season for the apples to ripen and crisp in time for harvest. Other crops may improve with warmer weather, like peaches.

“There’s no business that has more to do with the climate than growing,” McPherson said.

Maple Lawn Farms relies on agritourism for much of its business, making profits especially weather-dependent. People won’t come to pick their own apples or find their way through the corn maze in the rain. McPherson said he’s guarding against losses by diversifying his crops and spreading events throughout the year. 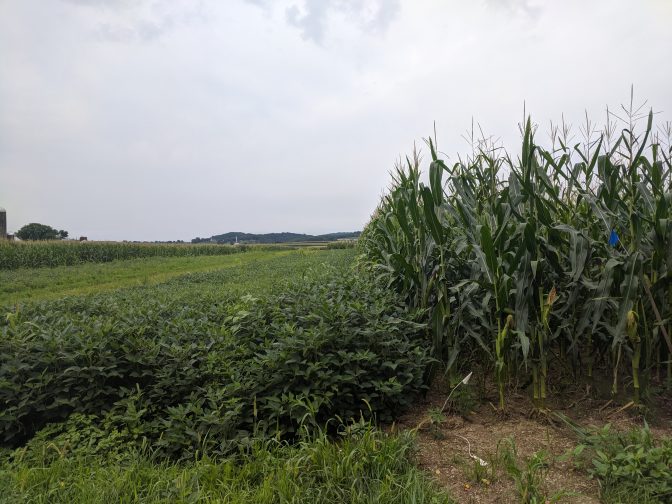 The Rodale Institute has been comparing organic and conventional agriculture side-by-side in its long-running Farming Systems Trial.

Farmers’ climate adaptation methods aren’t limited to the crops we see above ground. Some are looking deeper, to healthy soil as a buffer against extremes.

Some soil health measures can draw carbon dioxide out of the atmosphere, acting as climate change mitigation.

Plants do this naturally. They take in CO2 as food and then transfer the carbon into the soil through their roots, helping create a healthy ecosystem for beneficial microbes in the earth.

The Rodale Institute in Berks County is calling for farmers to be a larger part of the climate solution by transitioning to a collection of practices now called regenerative agriculture.

“Carbon, it belongs to the soil, rather than the atmosphere. So, we just want to put it back in there,” said Yichao Rui, research director for Rodale’s Farming Systems Trial. 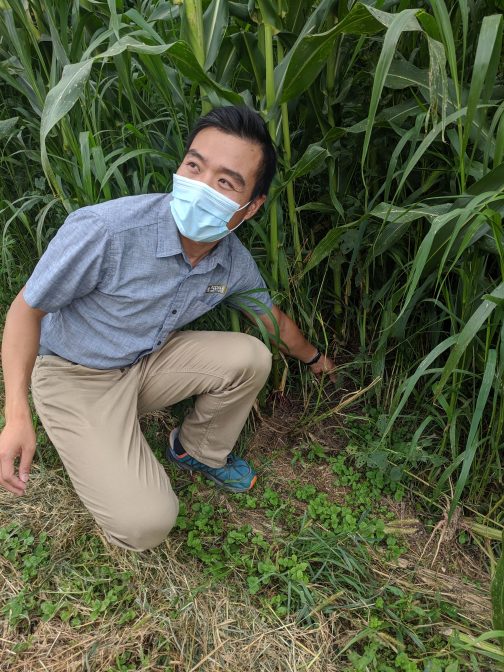 Yichao Rui shows the difference between farming system trials during a media event at Rodale Institute in Berks County on August 13, 2020.

One key practice in regenerative agriculture is cover cropping: After a crop is harvested, a cover such as clover or rye is put on the fields and allowed to grow over the winter, putting nutrients into the soil and drawing down carbon. In the spring, the cover crop can be flattened and new seeds can be planted directly into the cover. As the new crop grows, the old cover suppresses weeds.

The goal is to increase the organic matter in the soil; the longer plants are allowed to grow, the more organic matter they create. About half of soil organic matter — which includes living and decaying plants, insects and microbes — is carbon.

Some tech startups that frame “carbon farming” as a big climate solution are trying to create markets to pay farmers to trap carbon using these methods. President Biden’s transition team proposed setting up a carbon bank for the same reason.

Rodale says its research shows that if every farmer in the world followed a strict definition of regenerative farming, they could sequester all man made carbon dioxide emissions.

Other estimates are much lower. And some years-long studies have cast doubt that carbon can stay locked in the soil for very long.

Egan runs a more broadly focused soil health study, which looks at many of the same practices that fall under the regenerative label.

He said soil health is “absolutely the linchpin of any climate adaptation strategy for agriculture.” In addition to trapping carbon dioxide, healthy soils hold onto more nutrients like nitrogen. That can reduce a farmer’s need to use synthetic fertilizers, which are another source of greenhouse gases.

But Egan added that, of the more than 100 farmers in Pennsylvania and neighboring states that participate in the study, he hasn’t met one whose primary goal around soil health is climate mitigation.

Egan said if carbon payments do come about, it could help farmers with their bottom lines.

But even without a check, there are still reasons to do what advocates call regenerative agriculture. 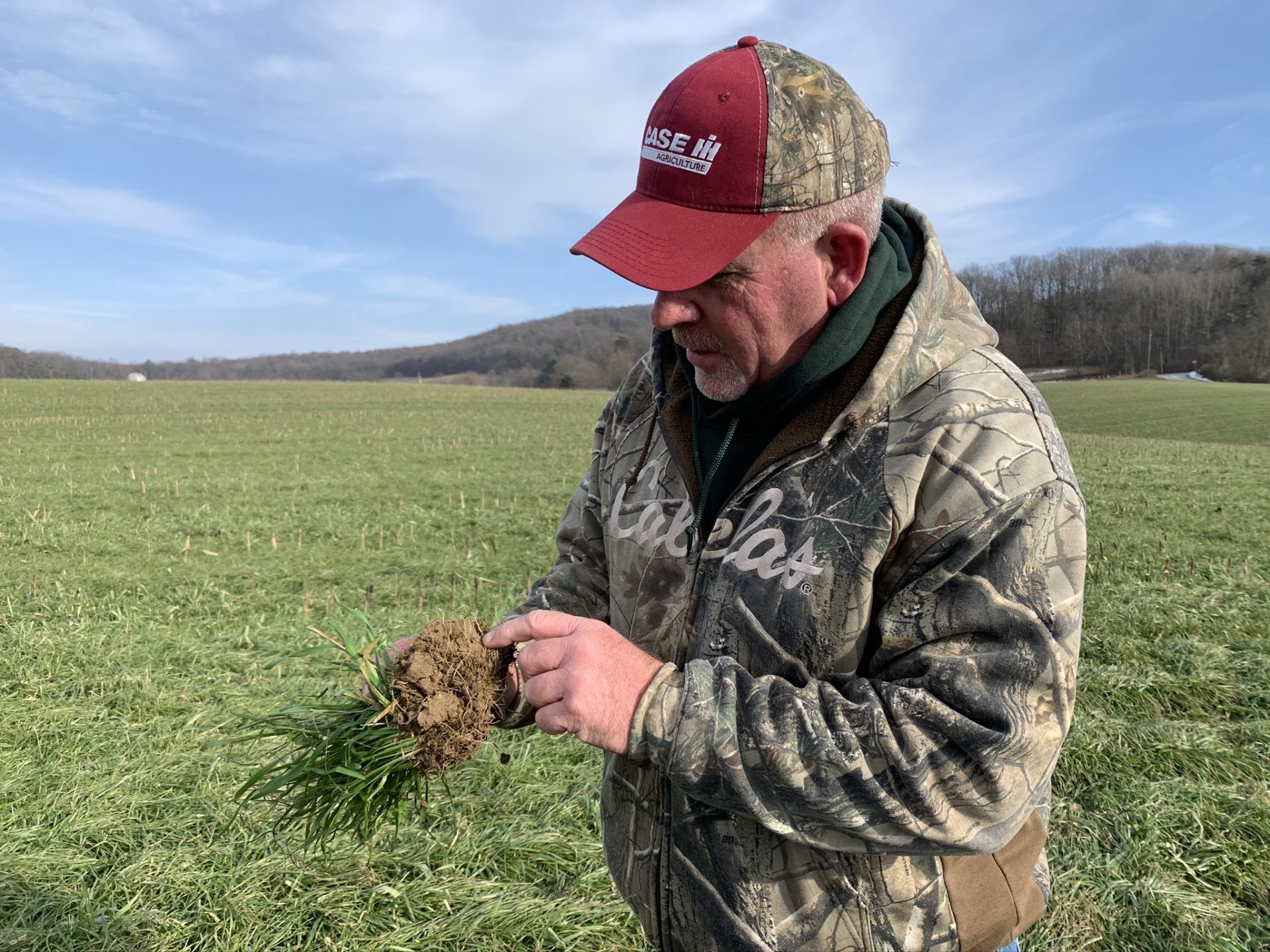 Dave McLaughlin points to the roots that contribute organic matter to his fields on January 13, 2021.

Owner Will Brownback said when his father took the first soil test in 1981, organic matter was less than 2 percent. Today it’s close to 6 percent.

He believes better soil health will not only produce healthier food, but will help buffer against the effects of climate change.

Perry County grain farmer Dave McLaughlin has been thinking more about soil health over the last decade. He started practicing no-till in the late 90s, when his father-in-law retired and McLaughlin figured he could save time by tilling less.

“There’s not really a lofty reason to all this,” he said. “I just had to get the work done.”

But now McLaughlin describes soil as his “number one asset.”

Soil that always has something green growing and is full of living roots and microorganisms is considered healthy. It’s also resilient.

Healthy soil holds onto water longer through a drought. It can soak up more water during heavy rain events. It keeps nutrients in place, preventing runoff that can harm waterways.

At the Pennsylvania Farm Show a few years ago, McLaughlin gave trays of his soil to use in a rainfall simulator, which would show water infiltration and runoff. He said he expected to switch out the trays over the course of the week, but he didn’t need to; his samples held up against the week-long deluge with no runoff.

McLaughlin says he hasn’t noticed any effects of climate change on his farm so far, but he knows the methods he uses on his land benefit people downstream and the surrounding environment.

“I’m doing a better job now than I was 30 years ago, the soils are better prepared than they were 30 years ago,” he said. “So, I’ll just roll with the punches Mother Nature throws at me.”

Pa. sends a lot of fracking waste to Ohio. People there want more say in where injection wells go