FRIEDENS, PA - JUNE 08: A "Make Coal Great Again" hard hat sits on a table at the grand opening of Corsa Coal's Acosta Deep Mine on June 8, 2017 in Friedens, Pennsylvania. 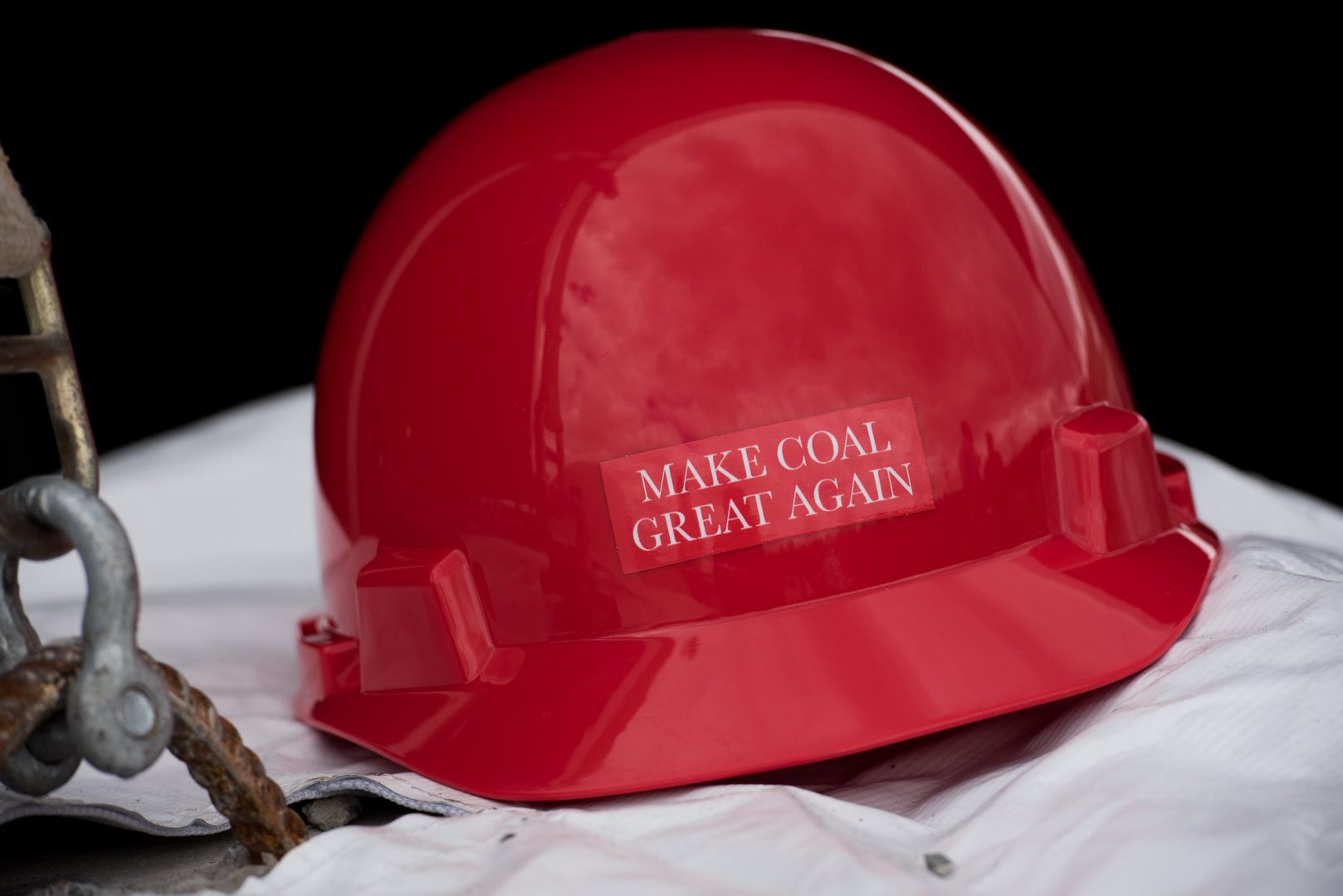 FRIEDENS, PA - JUNE 08: A "Make Coal Great Again" hard hat sits on a table at the grand opening of Corsa Coal's Acosta Deep Mine on June 8, 2017 in Friedens, Pennsylvania.

October 26, 2020 | 1:29 PM
WITF’s Elections page collects information from the latest decisions on the election process, to where & how to vote, to candidate interviews. Find that, and more, by going here.

Trains still carry coal past the now-abandoned Mathies Mine, located on the Monongahela River in Washington County. Metal fencing blocks the mine entrance, a cave-like opening where hundreds of miners once trod miles of tunnels.

Art Sullivan worked at Mathies about 40 years ago. He fondly remembers the challenge and camaraderie of the labor, and what it meant for his family and neighbors.

“The attachment is more to the community: the religion, the family, and the land for farming and hunting and fishing,” he said, standing outside the mine.

During his career, Sullivan advanced in the industry and eventually traveled the world consulting coal companies. But now, he’s left with a sense of betrayal. 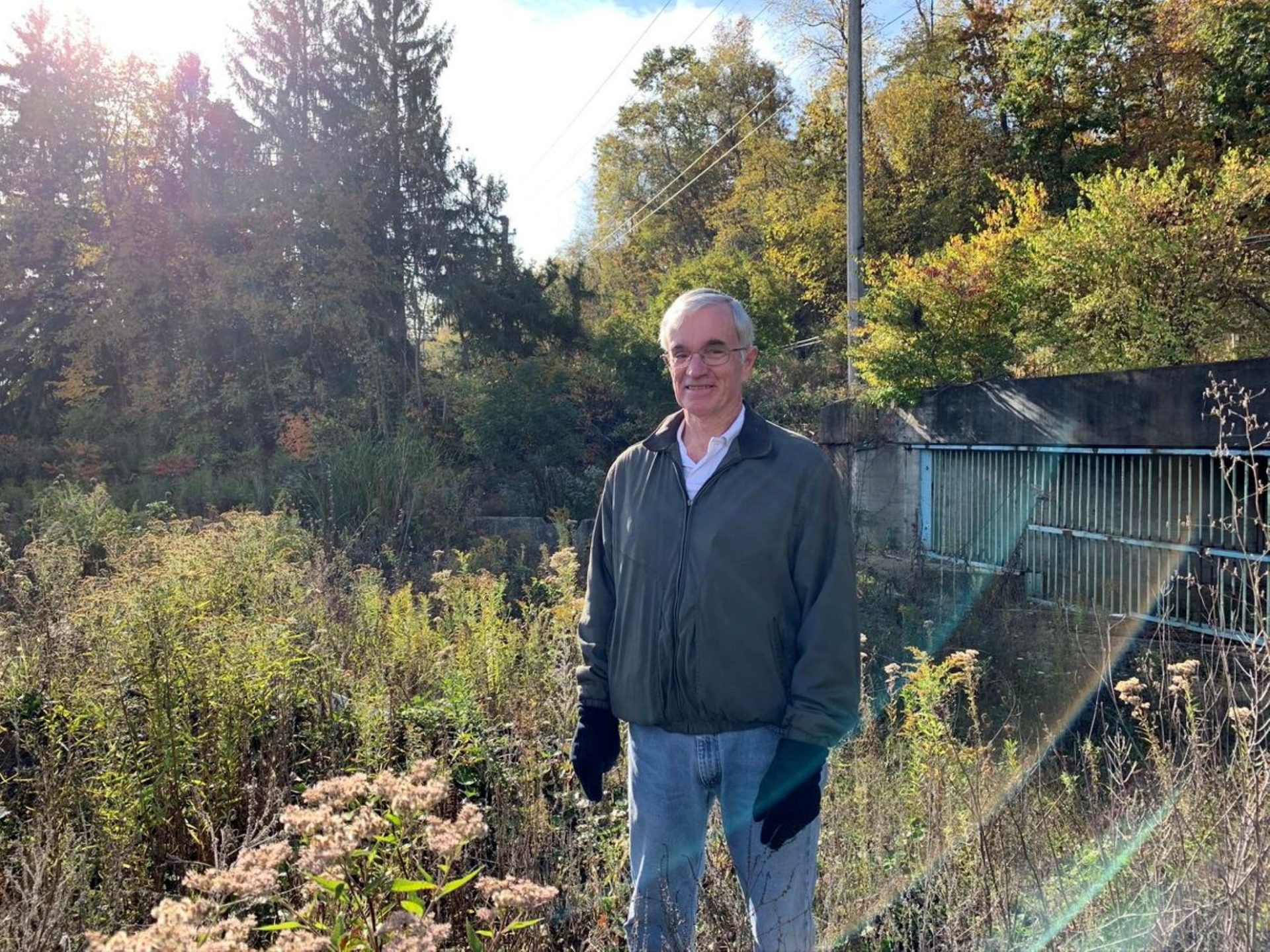 “Donald Trump has no plan for coal,” the Washington County resident said of the president. “The problem is he lied to we coal miners.”

But the coal industry has lost another 10 percent of its workforce since Trump took office. The losses include hundreds of mining jobs in southwestern Pennsylvania alone.

During his 2016 campaign, Trump blamed Obama-era environmental regulations for the decline, and set about rolling those protections back.  And although coal has continued to decline, Republicans still highlight energy as a critical wedge issue between Trump and his Democratic opponent, former Vice President Joe Biden. Arguments over fracking for natural gas, a major industry in western Pennsylvania and a crucial factor in coal’s dwindling fortunes, have consumed much of the campaign. In the candidates’ final debate Thursday, Trump hounded Biden for saying he would seek to transition away from fossil fuels such as oil and gas.

Biden firmly denies GOP claims that he would ban fracking. In fact, his strategy instead focuses on clean energy. The Democrat has proposed a $2 trillion investment in clean energy technology and infrastructure development, with the goal of achieving net-zero emissions by 2050.

Broader use of renewable energy, such as solar and wind power, would not only benefit the environment, Biden said in a campaign video last year, but it would also “create more than 10 million new good-paying jobs all across the clean economy in the United States of America. It’s an enormous opportunity.”

A lot of construction jobs

Some of this work has already happened locally: A dozen union carpenters worked for a year attaching solar panels to the frame of a former steel rolling mill in Hazelwood. The array, completed this summer, now powers tech companies located inside the sprawling structure. 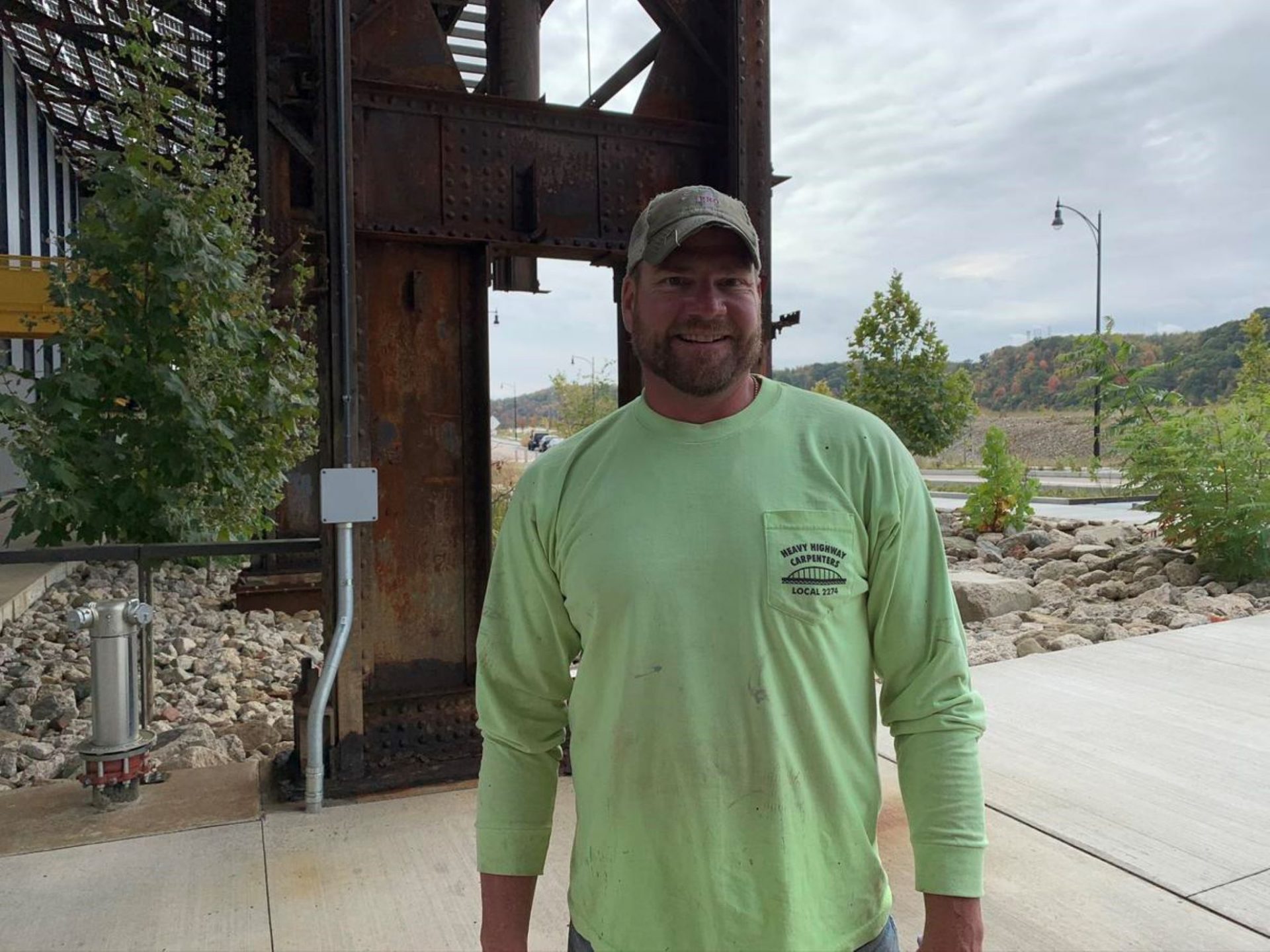 Bridge carpenter Tim Sippey served as the construction foreman for the solar array that now powers tech companies located at Mill 19 in Hazelwood.

Tim Sippey was the project foreman. Having never worked in renewable infrastructure before, he said the main adjustment was handling the delicate glass solar panels.

“You can’t bang them around. So that was one challenge,” he said. “The other challenge was how lightweight they are, because most things we pick [up] are real heavy. But [the panels] were lightweight so they would catch the wind.”

He added that solar energy promises to create jobs in communities across the country because it depends on the wide distribution of infrastructure to capture the energy, and then convert it into electricity.

“You’re talking about big solar farms and stuff like that that can be done on some hilly areas, too,” he said. “We’re talking about power plants in every location. Power plants on residential roofs. You can put 12, 15 solar panels on a roof and provide basically your net-zero energy.”

Carnahan acknowledged that challenges remain in areas like Pittsburgh that tend to be cloudy. In fact, when there’s not enough direct sunlight, the Hazelwood solar array instead draws on the largely fossil fuel-driven electrical grid. But during sunnier periods, it sends excess energy back to the grid for use by others. 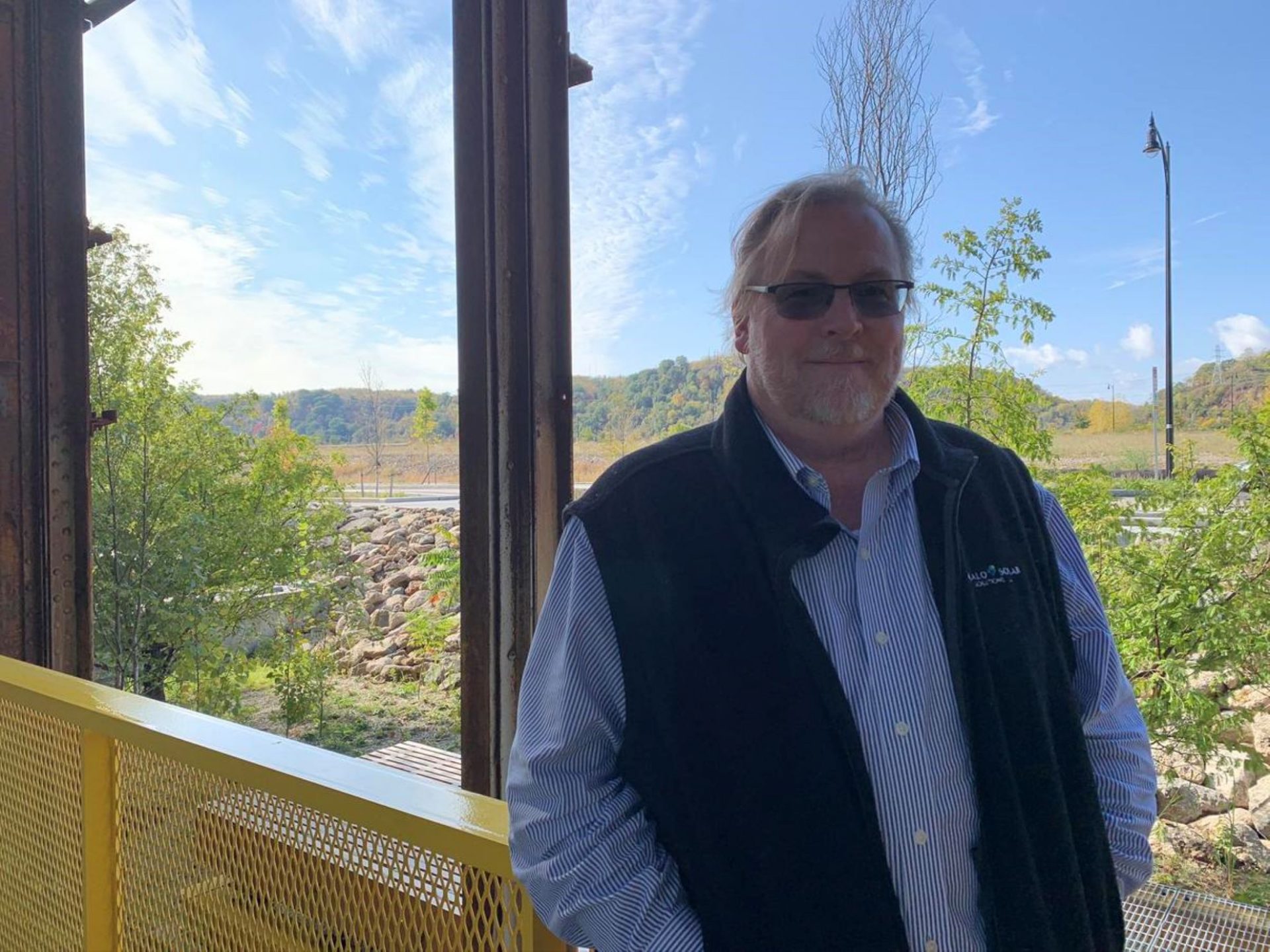 Michael Carnahan has worked in the solar power industry for 12 years and oversaw the construction of the Mill 19 solar array in Hazelwood.

To Carnahan, such hurdles illustrate the value of Biden’s proposed investment, because it could facilitate the development of energy storage technology that might one day eliminate the nation’s reliance on fossil fuels.

But former coal miner Jason White doubts that Biden’s more immediate plan to build green infrastructure has much to offer people like him. The Washington County native predicts miners would be reluctant to move from project to project after having grown accustomed to working for years in the same mine. Plus, he noted, they’d need to learn entirely new skills.

While Biden has pledged to make sure coal miners have the support they need to make that transition, White said it hasn’t worked out that way for his neighbors.

“I can’t tell you how many people I know that now either work at Wal-Mart, some job that’s half of what they were making, and they’re either struggling or they retired and now they’re on Social Security,” he said.

A supporter of the president’s, White believes environmental regulations hurt his industry. The Waynesburg mine where he used to work closed in 2015, and he said by the time Trump was elected, it was too late to undo that damage. But a Trump loss now, he added, would just make things worse.

“If he loses, and the next administration says, ‘Oh well, we’re going back to where it was eight years ago,’ well then you’re back to people being displaced, and power plants are going to continue to close,” White said. 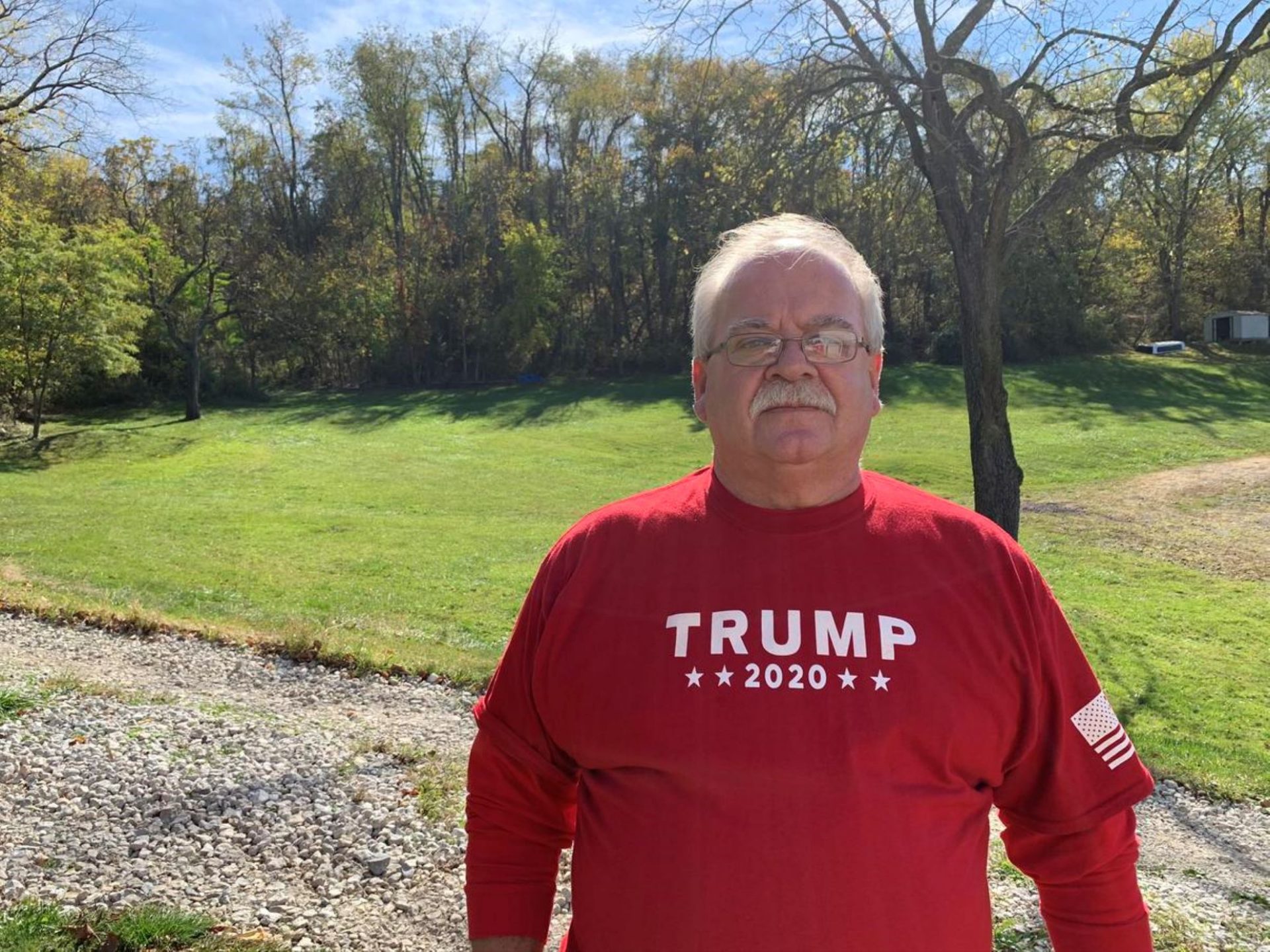 Bill Kozlovich, who worked in the coal industry for 20 years, leads the Republican Party of Fayette County.

Bill Kozlovich, who worked in coal for 20 years and now chairs the Republican Party of Fayette County, said voters should give Trump’s policies more time to take effect.

“We’ve been way, way over-regulated, and Donald Trump is working on that. But he can only do so much [in four years],” the Uniontown resident said. “Tax cuts, rolling regulation back … grows your business.”

Jason Bostic, vice president of the West Virginia Coal Association, added that Trump’s approach is also “extremely encouraging” for workers in the manufacturing and energy sectors because it reflects an “overarching attitude … that he’s trying to protect their jobs.”

“The president, I think, firmly believes in the resiliency of the American blue-collar worker and the need for heavy industry to flourish and advance in this country,” Bostic said.

But Jason Walsh, executive director of the BlueGreen Alliance, contends that Trump’s appeal is based on “a false choice” between jobs and the environment. By contrast, Walsh said, Biden recognizes “that good-paying jobs for all Americans should be at the center of our climate and energy solutions.”

A coalition of major labor unions and environmental organizations, the BlueGreen Alliance announced its support for Biden this summer. It was the first time in its 14-year history that the group had endorsed a candidate for president.

Walsh acknowledged that Biden’s plan would require significant retraining for some who work in coal today. “But this is … not just an issue of skills,” he said. “These are some of the hardest-working people in the country … We have to have a sort of ecosystem of support around [them] as they are transitioning.” Those supports, Walsh said, include continued health insurance coverage and income.

Democratic Lieutenant Governor John Fetterman, who has long stressed both blue-collar needs and environmental principles, added that the best way to respond to workers who remain skeptical of Biden’s energy plan is to deliver on the former vice president’s promise to prioritize their needs.

“We need to be held accountable and to make sure we don’t leave these industries, these individuals, and these regions behind,” Fetterman said.

But to give that strategy a try, Biden would have to get elected first. And voters in coal country could play a big part in deciding whether that happens.