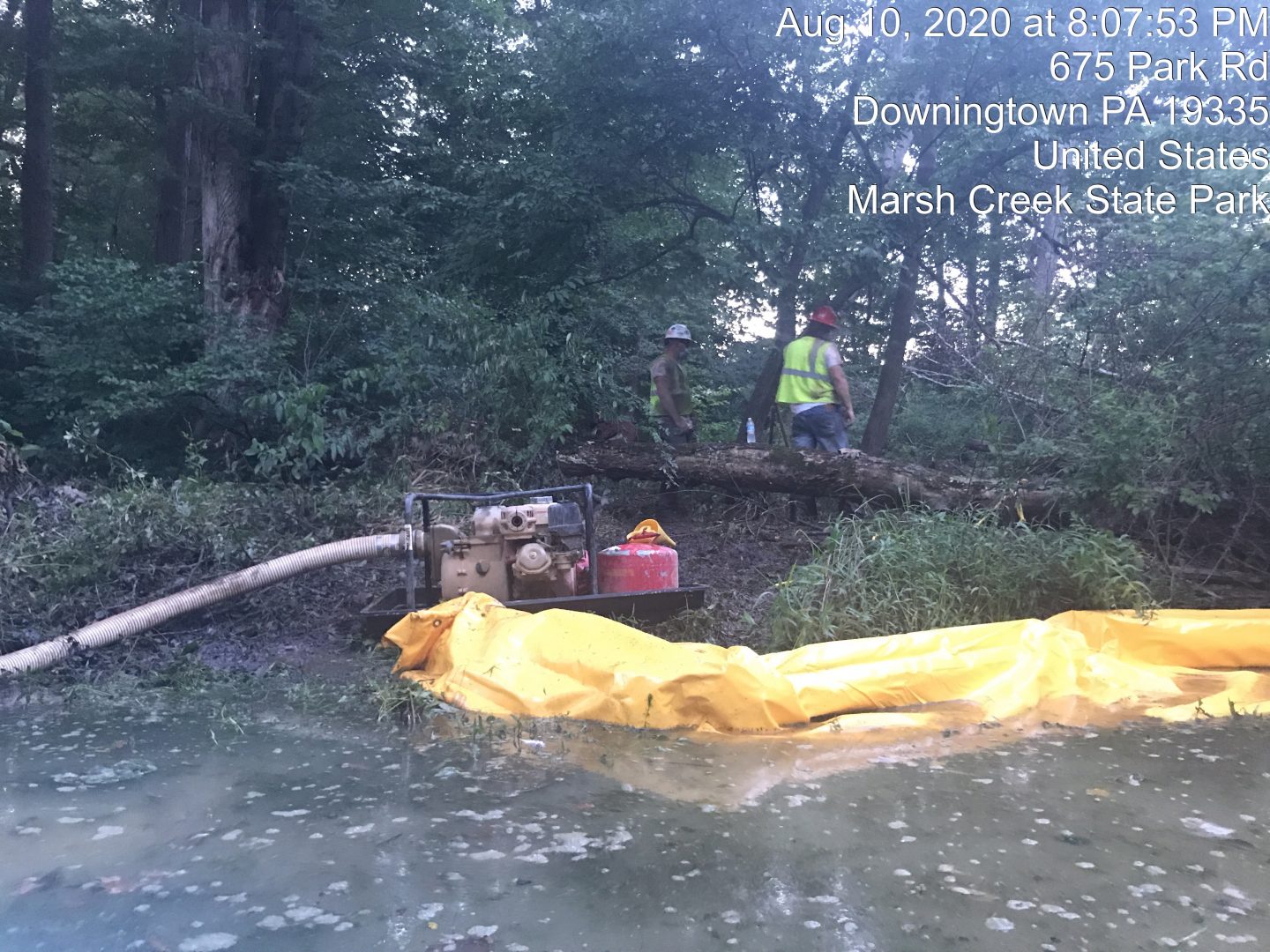 Sunoco’s Mariner East pipeline construction caused an estimated 10,000 gallons of drilling mud, or bentonite clay, to spill into Marsh Creek and Marsh Creek Lake at a state park in Chester County this week.

The Department of Environmental Protection has shut down two underground drilling sites, in West Whiteland Township and Upper Uwchlan Township, pending an investigation.

West Whiteland resident Ginny Kerslake said that she began to notice drilling mud seeping up onto her yard on Saturday morning, and that by the afternoon it became “a full blown river of mud across my property.”

At Marsh Creek State Park in Upper Uwchlan, an estimated 10,000 gallons of drilling mud seeped into the creek and made its way into the lake, according to the DEP. The lake is a popular recreation site and provides drinking water for Chester County residents. It’s unclear whether any drinking water supplies have been or will be affected.

Kerslake, who is a member of the pipeline opposition group Del-Chesco United for Public Safety, said she went out on the lake with her paddle boat on Monday.

“And as I was going in, it was getting murkier and murkier, and then it looked milky,” she said.

Drone footage taken by a resident shows a plume of mud across the lake. 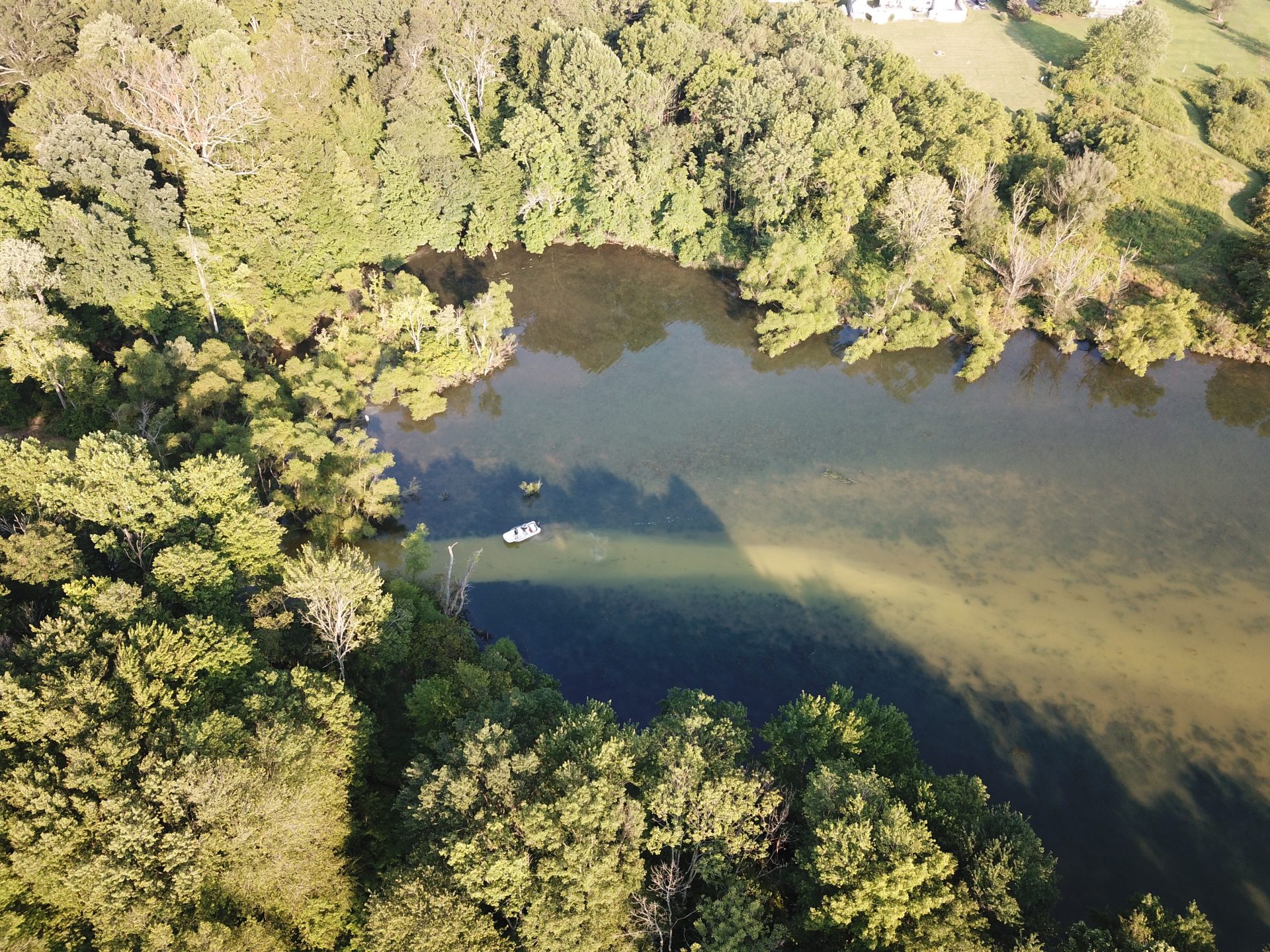 Drilling mud, or bentonite clay, is nontoxic. But in large quantities, it creates cloudiness, which could impact smaller aquatic life like macroinvertabrates. DEP spokesperson Virginia Cain said that there have been no fish kills, but that an investigation into the effects on other aquatic life is ongoing. Officials with the state Department of Conservation and Natural Resources and the Fish and Boat Commission are also on site and assisting with the cleanup using booms and vacuum trucks.

DEP said there are other affected sites under investigation at an apartment complex in West Whiteland Township.

The $3 billion, 350-mile-long natural gas liquids pipeline project began construction in February 2017 after the DEP identified hundreds of unaddressed deficiencies in its permits. Since then, the DEP has issued about 100 violations to the company for polluting high-value wetlands, waterways and private wells.

In summer 2017, Sunoco, which is now owned by Energy Transfer, agreed to a consent decree that governs how it must respond to spills. If DEP concludes that the spills are the result of what is known as an “inadvertent return” or “frac-out,” then the site will be shut down until the company produces a report that is approved by the DEP so it can restart.

As a result of construction mishaps and delays, which include the formation of sinkholes in Chester County, the company has used an older, smaller pipeline as a work-around to ship natural gas liquids to Marcus Hook. From there, the liquids are exported to a plastics manufacturer in Scotland.

A spokesperson for Energy Transfer said the company did cause an “inadvertent return” or spill into a stream that flows into Marsh Creek Lake.

“We recognize the importance of this waterbody and are committed to allocating all necessary resources to fully remediate and restore the area; which includes removing the nontoxic bentonite clay and water mix — sometimes referred to as `drilling mud,’” Energy Transfer spokesperson Lisa Coleman wrote in an email.

“While IRs are not unexpected, we try to take all precautions to avoid them from happening and to minimize the impacts when they do. IRs are covered in our permit applications approved by the Department of Environmental Protection (DEP). We comply with an Inadvertent Return Contingency Plan by responding to and containing the inadvertent return to avoid any adverse impacts, and by reporting them to the DEP,” she said.

Environmental groups and citizens frustrated with continued incidents like the recent spill have called on the DEP to halt all construction on the Mariner East pipeline.

“Sunoco will keep on spilling and keep on polluting our water supplies until they shut down, and DEP has the power to do that,” said Alex Bomstein, an attorney with Clean Air Council, an organization that has sued the company over pollution. “There comes a point where you don’t give second and third and fourth chances.”

Del-Chesco United is planning a paddle-board protest on the lake Wednesday morning.