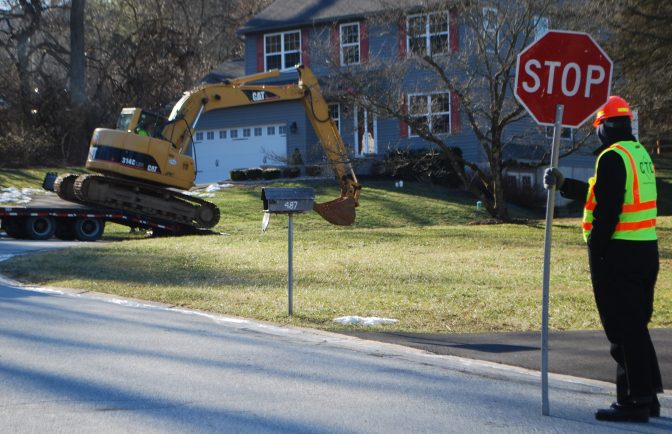 Contractors for Sunoco drove a backhoe to the site of a sinkhole at Lisa Drive in Chester County’s West Whiteland Township.

Residents of Chester County who oppose the Mariner East pipeline project have asked the Chester County District Attorney to re-file charges against an Energy Transfer employee after all criminal counts were dismissed at a preliminary hearing last week.

Chester County district judge John Bailey threw out all charges against Havertown resident Frank Recknagel after a hearing that lasted more than five hours, saying there was not enough evidence to move the case forward.

Recknagel, who manages security for the controversial pipeline, was facing 60 felony counts of bribery, conspiracy and related charges.

His attorneys called the charges “ludicrous from day one.”

“We never had a doubt that Frank would be ultimately vindicated but the reputational and personal impact is staggering,” said Justin Danilewitz.

Former Chester County DA Tom Hogan filed charges against Recknagel in December, as part of what he called a “buy-a-badge” scheme. Hogan alleged that Energy Transfer, parent company of Mariner East pipeline builder Sunoco Logistics, hired armed Pennsylvania constables to illegally provide security for the pipeline and then hid how those constables were paid.

Recknagel, according to the criminal complaint, organized the scheme.

When announcing the charges, Hogan said the constables used their badges and guns to intimidate residents living near Mariner East construction sites.

But Danilewitz says Recknagel’s role was to “provide a peace keeping function.”

He said there are emails to prove Recknagel’s intent, but would not provide them to StateImpact Pennsylvania.

The area around Lisa Drive in West Whiteland Township drew heightened attention when sinkholes began forming in residential backyards in 2018. Energy Transfer has since bought five homes directly impacted by the sinkholes.

“We learned that some landowners requested this [security presence] because there were so many people from the press and rabble rousers walking over their property,” Danilewitz said.

Nearby residents say that’s not true.

“One hundred percent false,” said Ginny Kerslake, who lives in West Whiteland Township and has suffered damage to her property from the pipeline construction. She is part of the group Del-Chesco United for Pipeline Safety.

Kerslake said homeowners complained of having lights shined in their windows at night, security guards stopping them and their friends, and filming them. She said the relatively quiet suburban middle-class neighborhood was transformed by the arrival of construction vehicles and aggressive security guards.

“Sunoco’s security guards drove back and forth a few times videoing me on my own property,” she said. “They were definitely not asked to be there. This is [Energy Transfer] trying to create a false narrative.”

A spokesperson for the Ryan’s office said they are “in the process of looking at our case and making a decision on that front.”

Ryan could also refer the case to the Attorney General, who recently charged two gas drillers with criminal conduct and released a grand jury report that included criticism of how the Department of Environmental Protection responds to gas industry complaints from residents.

Ryan would not comment on claims by Recknagel’s attorney that the original charges were politically motivated.

“The anti-pipeline activists happen to be on one side of the discussion today,” Danilewitz said. “But what I think the public might not appreciate is the tables could easily be turned. It’s in everyone’s interest that prosecutors’ decisions should be non-political decisions.”

Kerslake said that was a concern of hers when she first heard of the charges filed. But she points out that the former DA, Tom Hogan is a Republican who chose not to run for re-election. The current DA is a Democrat and has continued to pursue the case.

Charges were also filed against the constables themselves, along with employees of the international security firm Tiger Swan. Those preliminary hearings are scheduled for August. The Delaware County DA, a Democrat, also looked into criminal conduct and referred a case related to the Mariner East to the Attorney General’s office. The FBI is also reported to be investigating how the state issued permits for the Mariner East project.

“There’s a lot there,” Kerslake said, “and to say that it’s politically motivated, that’s an easy way for them to just dismiss all this.”

Household chemicals that harm fish were found in Susquehanna River. This Penn State research aims to help lessen the problem