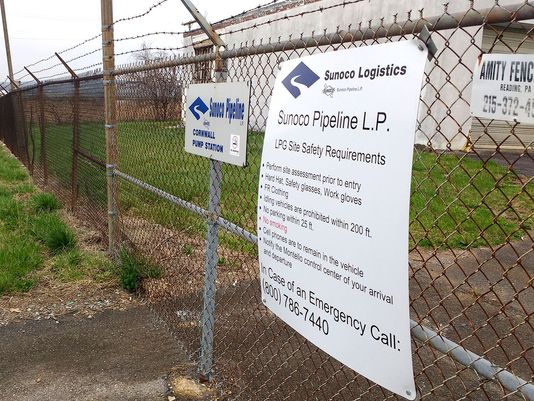 Energy Transfer declined to say what it will do after the Pennsylvania Supreme Court ruled that buildings housing part of Sunoco’s Mariner East 1 pipeline were built without required permits.

In a June 1 decision, the Supreme Court upheld an earlier ruling that the buildings in West Cornwall Township should not be assumed to be exempt from typical construction permitting.

“The [Supreme Court’s] decision does not impact our operation of the pumps or the pipeline,” said Lisa Coleman, a representative for Energy Transfer, which owns Sunoco. She did not respond directly to a question about Sunoco’s next steps.

The plaintiffs are part of an advocacy group called Concerned Citizens of Lebanon County. One of them, Pam Bishop, said that to get the correct permit, Sunoco will “have to go through the process that they should have gone through five years ago.”

One of the two garage-sized buildings without a proper permit houses a pump station, which moves natural gas liquids along the Mariner East 1 pipeline. Natural gas liquids include propane, ethane, and butane. If natural gas liquids leak out of pipelines, they can form a combustible cloud of gas at ground level. Some residents of West Cornwall Township believe the buildings pose a safety risk.

In court documents, plaintiffs say they worried about the potential for leaking natural gas liquids to pool in the building. Environmental attorney Rich Raiders testified that, in the event of an explosion, parts of the building could fall into neighboring properties.

In October, a three-judge Commonwealth Court panel revoked the building permit because it was issued to Sunoco under an implied exemption for public utilities in the township zoning code. Judge P. Kevin Brobson wrote, “We reject the notion that an exemption from local zoning can be implied to exist.” The court did not rule on Mariner East 1’s status as a public utility, nor on the township’s right to place restrictions on public utilities.

On June 1, the Supreme Court denied Sunoco’s appeal of the Commonwealth Court ruling.

Township residents still don’t know what will happen to the buildings.

Jeff Steckbeck, the consulting engineer for West Cornwall Township, said he thinks Sunoco will remove the buildings. He said Sunoco could modify the existing pump station to have waterproof controls that don’t need a building.

Bishop and Doug Lorenzen of Concerned Citizens of Lebanon County are not convinced Sunoco will take down the buildings.

“We suspect that they don’t want to do that,” Bishop said, “because the purpose for the structures is to protect that equipment at the pump station.”

However, Bishop and Lorenzen also say it’s possible Sunoco won’t act on the court’s decision. If that happens, they don’t know how Concerned Citizens of Lebanon County would respond. Lorenzen said Sunoco has “lots of high-priced attorneys working on this, so they’ve made a lot of twists and turns in the past that have boggled the mind, and I’m sure they will continue to do that.”

As for their struggle against Sunoco’s lack of permits, Lorenzen said, “We’re much further along than we were, but the ultimate end of this— what actually ends up from this—we’re not sure yet. It depends on Sunoco, whether Sunoco wants to be a good neighbor.”