Heavy rains flood a trench where the Atlantic Sunrise pipeline is being installed August 22, 2018 in Lebanon County.

Opponents of Mariner East say PHMSA standards are too little, too late 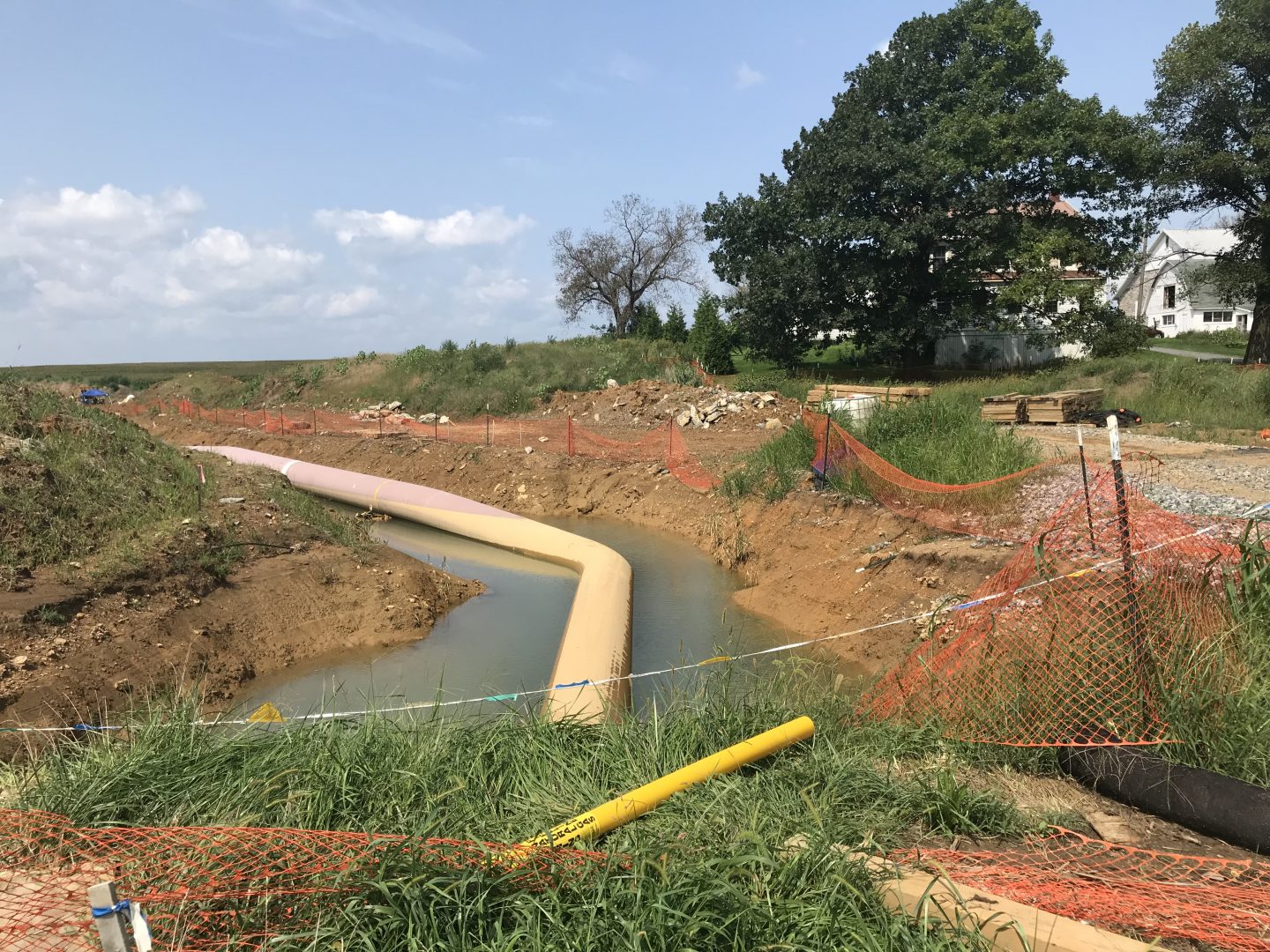 Heavy rains flood a trench where the Atlantic Sunrise pipeline is being installed August 22, 2018 in Lebanon County.

New federal rules on pipeline safety are being praised by the oil and gas industry but dismissed by pipeline critics in Pennsylvania as unlikely to make pipelines any safer.

The rules from the Pipeline and Hazardous Materials Safety Administration will increase requirements on operators to follow “risk-based integrity management” practices to keep pipelines in good condition; protect pipelines from extreme weather; and give PHMSA more power to shut down or restrict pipeline operations to ensure safety.

The American Petroleum Institute, the industry’s main trade group, said the rules, which apply to pipelines carrying both natural gas and hazardous liquids, will enhance safety by requiring operators to make better use of new technologies “that will help to keep their operations safe for employees, surrounding communities and the environment,” API said in a statement on Oct. 1, when the rules were published.

Sunoco Pipeline, which has admitted making “mistakes” in building the Mariner East natural gas liquids pipelines across Pennsylvania, declined to say specifically how the new rules would affect that project, but said it will comply.

“We will follow all applicable rules and regulations throughout the construction and operation of our pipelines, including the Mariner East pipelines,” said Vicki Granado, a spokeswoman for Sunoco’s parent, Energy Transfer.

Opponents of the Mariner East project said the new rules fail to establish a process for determining where a pipeline should be built, and make no requirements on emergency procedures for the public to follow if there’s a leak or explosion – both of which underlie their continuing criticism of the project and regulators’ management of it.

George Alexander, a member of the leadership team for the community group Del-Chesco United for Pipeline Safety, said PHMSA’s new requirement for pipeline operators to increase their “integrity management” (IM) practices won’t make any difference to Sunoco because its record shows that it already failed to fully implement existing rules on IM.

A leak of about 20 barrels of butane and propane from the 1930s-era Mariner East 1 at Morgantown, Berks County in April 2017 was caused by corrosion — as determined by Public Utility Commission investigators – because of Sunoco’s failure to properly use an anti-corrosion technique called “cathodic protection” that was part of its IM plan, Alexander said.

“As long as Sunoco does not bother to follow and act on its own existing IM plans, these new rules will have no meaningful effect,” he said.

He predicted that the new rules won’t affect Sunoco’s practices that he said make pipeline operation a higher priority than safety. He noted that the Department of Environmental Protection shut down construction of the lines in January 2018 because Sunoco had frequently violated its permits, and that the agency stopped issuing new water-crossing permits in February this year after the company violated permits related to the Revolution gathering line in western Pennsylvania.

“Until that culture changes, no improvements in the regulations will do any good,” Alexander said.

Granado, the ET spokeswoman, responded to Alexander’s claims by reiterating that Sunoco will comply with the new PHMSA rules.

Lynda Farrell, executive director of the Pipeline Safety Coalition, a Pennsylvania-based advocacy group, said the rules appeared to make progress on safety, but said if they had been issued earlier, they might have been able to prevent gas pipeline explosions including one at San Bruno, California in 2010 and Sissonville, West Virginia in 2012.

“This is progress, but it’s taken far too long to get to this point,” Farrell said.

Public concern about the safety of Mariner East will come to a head at judicial hearings in West Chester on Oct. 23 and 24 when seven residents of Delaware and Chester Counties – the so-called Safety Seven – will urge a PUC judge to shut down the lines, saying their lives are endangered by the proximity of the highly explosive natural gas liquids to homes, businesses and schools. The seven will also accuse Sunoco of failing to prepare residents on how to respond to a pipeline leak or explosion.

In June, the PUC launched its own review of safety regulations for highly volatile liquids pipelines such as Mariner East, saying it would look at issues including the materials that pipelines are made of, the depth to which they are buried, the locations of valves controlling the flow of liquids, and the conversion of pipelines from one liquid or gas to another.

Under the new federal rules, operators of pipelines built before 1970, such as Mariner East 1, will be required to determine the material strength of the lines by confirming the Maximum Allowable Operating Pressure.

For operators of pipelines carrying hazardous liquids – such as Sunoco’s new Mariner East 2 and 2X lines — the new rules extend leak-detection requirements and encourage companies to “use all available data to understand pipeline safety threats.”

Another new rule gives PHMSA more power to issue emergency orders in the event of an imminent threat to pipeline safety, allowing it to impose restrictions and prohibitions on owners and operators of gas and hazardous liquids pipelines to ensure safe operation.

The rules address Congressional mandates from the Pipeline Safety Act of 2011 and recommendations from the National Transportation Safety Board, PHMSA said.

The changes reflect an effort to improve safety as more pipelines are built to carry an increased volume of fuels that have been accessed by fracking over the last decade, the agency said.

Critics of Mariner East and other pipeline projects in Pennsylvania say safety is compromised by building the lines through densely populated areas and by reusing old pipes such as Mariner East 1, and another line with a history of leaks that is being used as part of the Mariner East network until its new construction is complete.

Safety fears have also been fueled by a series of sinkholes at a construction site in West Whiteland Township Chester County; by dozens of drilling mud leaks into wetlands and private property, and by several shutdowns ordered by regulators or the courts since the cross-state pipelines began construction in February 2017.

Activists urge Wolf, again, to shut down the Mariner pipelines