Activists urge Wolf, again, to shut down the Mariner pipelines

They’re pointing to sinkholes and contaminated wells they’ve seen throughout the building process, and say they’re worried about explosions. 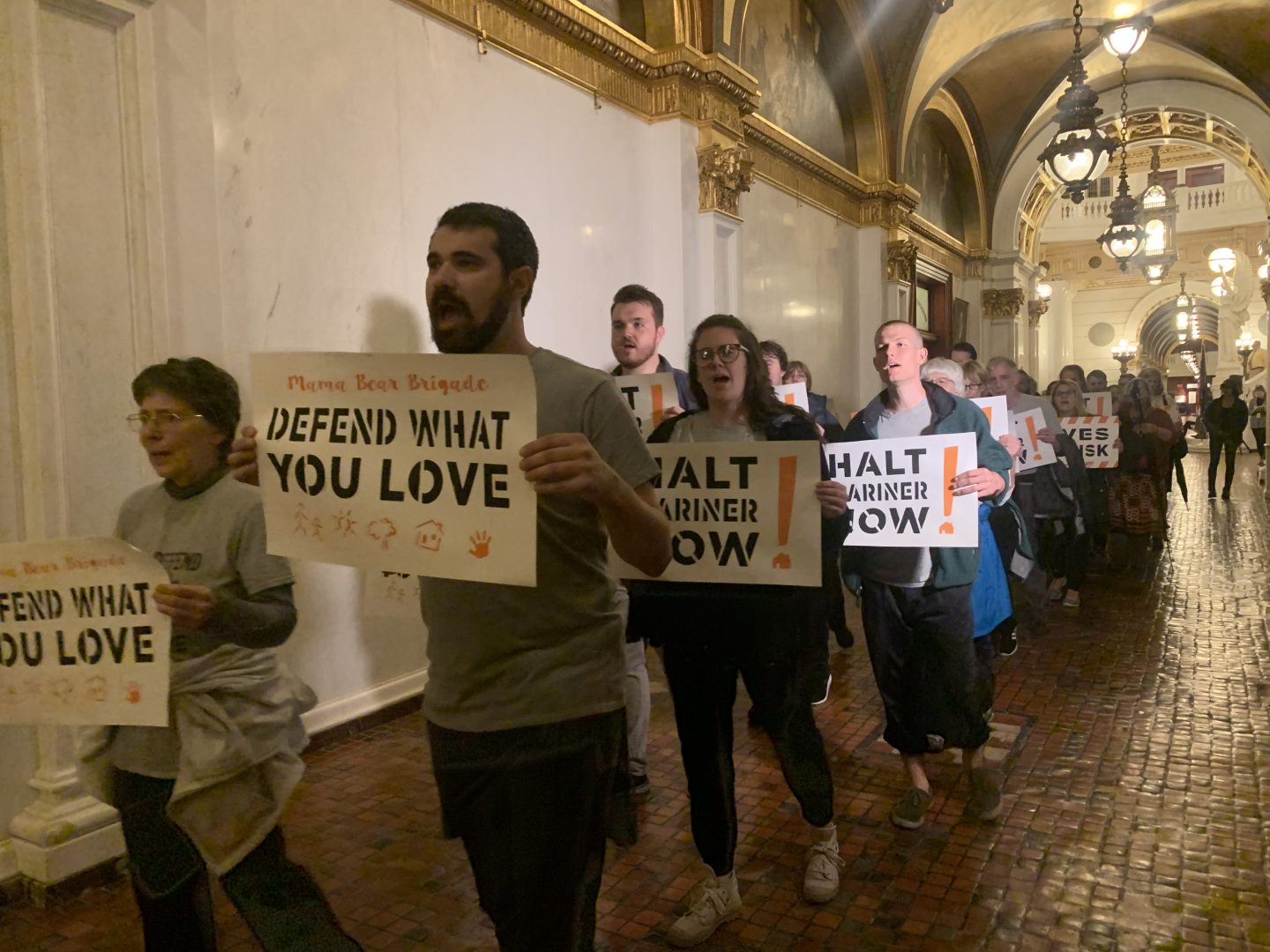 (Harrisburg) — Democratic Governor Tom Wolf got some unexpected visitors Wednesday—or at least, the hallway outside his office did.

When a crowd of about 60 protesters with the groups Halt Mariner Now and the Mama Bear Brigade gathered outside Wolf’s door to ask him to close down a major, nearly completed pipeline project, Wolf wasn’t there and Capitol police wouldn’t open the door.

There are three pipelines at the heart of the advocacy effort, which dates back several years: the Mariner East 1, 2, and 2X. All carry, or are designed to one day carry, natural gas liquids from the Marcellus Shale region in Ohio and Western Pennsylvania to a Delaware County processing terminal.

The project has been slowed and stopped many times by issues that include a rash of sinkholes caused by construction, and mud from drilling polluting wells and waterways.

People who live in the southeast, where construction has been heavy in residential areas, are also worried that the highly flammable liquids in the line could combust.

Luke Bauerlein, an organizer with the Halt Mariner Now group, said that’s one of his big concerns.

“Our community residents aren’t lying when they say this has the potential to be a bomb,” he said, adding that he doesn’t think Sunoco has given them good enough evacuation advice. “I’m not going to be able to forgive myself if I don’t stand up and there’s an accident that happens. We’ve been living on luck for way too long.”

Wolf met with the protesters in Chester County several months ago.

He told them while he shares some of their safety and environmental concerns, the gas liquids need to be moved and the administration is trying to keep the process safe.

“We are trying to make transmission of this stuff, and the alternatives to this, I think, are even worse,” he told them at the time. “So, we’ve got to figure out how to do a better job, I fully agree. What we disagree on [is] in terms of whether we should keep doing this or not.”

Throughout the Mariner project, Sunoco and pro-gas groups have maintained that the pipeline is safe, and that sinkholes and contamination are just a result of construction.

“Oversight of this project is ongoing and strict, as actions by regulators demonstrate,” the pro-pipeline Pennsylvania Energy Infrastructure Alliance said in a statement. “The project is legally permitted and operated, as courts have ruled repeatedly.”

The alliance added, pipeline work has provided a number of temporary union jobs in the commonwealth.

Bauerlein said he and his fellow demonstrators aren’t necessarily discouraged by Wolf’s refusal to stop the Mariner project. He merely sees it as a cue to move their protests out of the Capitol.

“I’m not sure I can speak to that today,” he said. “But stay tuned, there will be more plans to come.”

Trump to appear at gas conference in Pittsburgh next week