Dreaming of going solar? In Philadelphia a city rebate can help.

A new Philadelphia solar rebate could help homeowners save about $1,000.

With less than 0.4% of the city’s energy mix coming from solar power, Kenney needs to pick up the pace to reach his administration’s clean-energy goals. That might be hard to do with state policies that lack incentives for the industry to flourish and a federal tax credit that starts to scale down next year.

So two bills signed into law on Wednesday make going solar more affordable for Philadelphia’s home and business owners, for a limited amount of time. 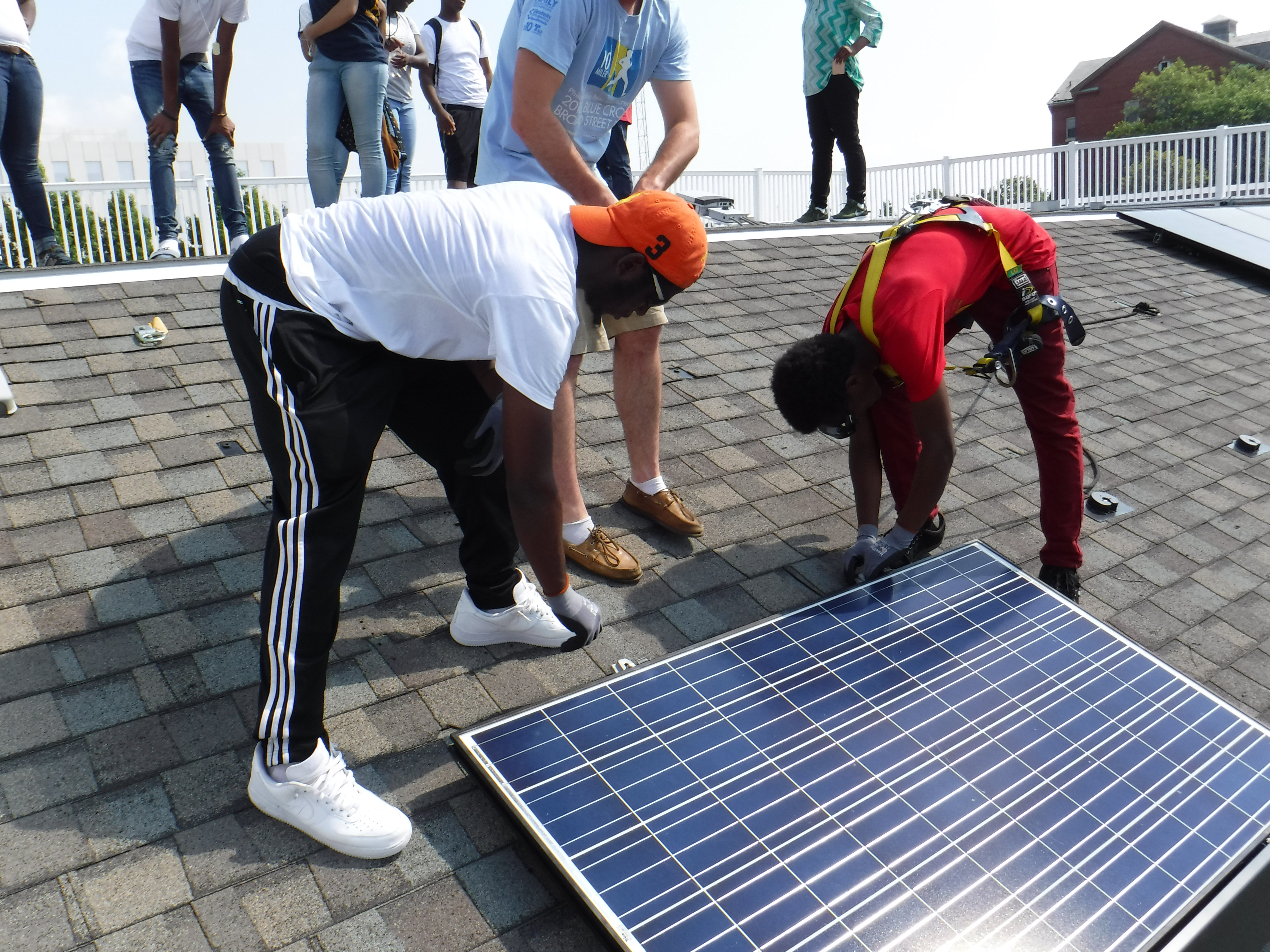 As part of the Solarize Philly program, the city is training Philadelphia public school students for jobs on the solar industry.

A rebate program will offset the cost of installing solar panels by 20 cents per watt on residential properties and 10 cents per watt on commercial properties. For a typical Philly rowhouse with a 5 kilowatt solar system, that means $1,000 in savings. That’s on top of discounts the city offers through its group buying program, Solarize Philly.

“The average homeowner will save — with this program, with Solarize Philly, and with the federal tax credit that’s still available this year —  roughly $8,000 per household,” said Emily Schapira, the Philadelphia Energy Authority’s executive director.

Liz Robinson directs the Philadelphia Solar Energy Association. She said the city needs this kind of push for those who keep delaying the decision to go solar — especially considering the reduction of the 30% federal solar tax credit, also known as the Investment Tax Credit (ITC), starting next year. Homeowners will be able to deduct only 26% in 2020 and 23% in 2021 through the credit before it expires.

Laura Rigell, who directs the Energy Authority’s solar program, said that to meet the city’s goal of reducing emissions by 80 percent by 2050, it needs to add 15 megawatts of solar every year.

“Last year, we had more solar than we’ve ever had, it was a big year for Philadelphia solar, and we had added 2 megawatts. So we need to be ramping that up significantly for it to get on track to meet the city climate goals,” she said.

The city will make a maximum of $500,000 available for the Solar Panel Incentive Program per year, on a first come, first served basis. It will cover installations done from July 1, 2019, to December 31, 2024. No other city in Pennsylvania has a grant program like this one, according to observers.

A second measure offers incentives to commercial building owners to install solar panels on their properties by allowing them to finance them — and other renewable-energy and energy-efficiency projects — through their property tax payments. The Commercial Property Assessed Clean Energy program, better known as C-PACE, is used in over 30 states and was adopted in Pennsylvania last year. Philadelphia is the first city in the state to implement it.

To reach its climate goals, Philadelphia needs to reduce emissions from fossil-fuel generated electricity. Such emissions now account for 39% of those coming from the city’s built environment.

“You need to be able to make long-term investments for energy efficiency and solar measures that may not pay back for 10, 15, and even 20 years,” Boggs said.

Solar has been growing fast in Philadelphia, but the city’s solar market is still in its early ages.

The Philadelphia Energy Authority’s Schapira said that before 2017, there were so few solar installations that neither the Department of Licences and Inspection nor PECO had established solar-permitting processes. In 2017, the city issued 377 solar installation permits, 100 more than a year before. And in 2018, the number of permits grew to 447, for a city total of 1,444 solar permits.

Said Schapira: “2017, I think, was really the breakout year for solar in Philly — we were the fourth fastest-growing solar market in the country that year.”

So far, 481 residents have installed solar through the program. And although the agency’s goal was to complete 500 by the end of last year, the program is acknowledged as a success.

“Solarize programs have been happening for probably 10 years around the country right now, but I think they [Philadelphia] have one of the largest and most successful Solarize programs that have occurred,” said Sharon Pillar, the Pennsylvania consultant for Environmental Entrepreneurs (E2), a national nonprofit promoting renewable energy.

Joe Kiss, CEO of Kiss Electric, a solar company based in Levittown that works with Solarize Philly, said the program jump-started business in the area.

“Five or 10 years ago, there was no market in Philadelphia, it was very difficult,” Kiss said. Now, he noted, not only is there a market, it’s “one of the strongest in the country,” if not the strongest.

A 2014 Yale study found that most people install solar on their roofs because their neighbors did. That’s also the case in Philly, Schapira said, which is why they’re adding a “solar home tour” to their marketing strategies to get new contracts signed. (For a preview, take a look at this Instagram account featuring solar panels in Philly.)

But, according to a recent report, 78% of those who went solar via Solarize Philly did it because they wanted to protect the environment against climate change, and 20% did it to save on their electric bills.

Philadelphia Solar Energy Association director Robinson said that from an energy point of view, the value of the city’s program is minor — 481 residential rooftop panels don’t generate a lot of power. Its biggest contribution, she said, is education: It helps people really understand solar energy.

“You have it your roof, you have an inverter, you see how much you’re putting in the grid, if you’re selling solar, you are aware of its price … It makes solar very tangible and helps people understand how the technology works, and push for a much broader-scale adoption of solar,” Robinson said.

That’s going to come in handy when pushing for the next challenge for the industry — moving to community solar. That would allow those who rent or don’t have the capital to install panels on their roofs — Robinson said that accounts for 70% of residents —  to access solar energy by subscribing to a share of it. A bipartisan bill was introduced this year in Harrisburg.

Jobs in solar are also growing in Philadelphia. Solarize Philly has created 52 jobs, according to the city. But Pennsylvania’s lack of policies promoting solar have slowed the market in the state, in comparison with New York, New Jersey, California and Massachusetts, which have adopted strong renewable-energy policies.

Pennsylvania’s Alternative Energy Portfolio Standards Act, passed in 2004, requires energy utilities to purchase 0.5% of power from solar sources by 2021. Solar advocates want to expand that to 10% by 2030.

Despite the lack of support, Gold-Markel said the industry could absorb lost jobs from the Philadelphia Energy Solutions refinery.

“We’ve tapped under 1% of our solar potential. If you’re going to tell me that the jobs aren’t sustainable, I’m going to tell you we have a lot of the market yet to address,” he said.

Ron Celentano, president of the Pennsylvania Solar Energy Industries Association, said Philadelphia is moving “far more and faster than any other city in the state.”

Celentano said Southeastern Pennsylvania has more solar companies than the rest of the state because there are better conditions for the market to develop  — more sun, higher prices for electricity, and more awareness of rooftop solar. But he added that Philadelphia shines its own light because of the policies adopted locally.

Last year, Mayor Kenney signed a bill for the city to enter into a power purchase agreement to buy solar power from a 70-megawatt solar farm in Adams County. The facility, the largest in the state, will provide 22% of the municipal electricity.

In addition, the U.S. Department of Energy selected the Philadelphia Energy Authority for a three-year, $1.25 million award to train high school students and recognized the city for opening up its solar market.

“Philadelphia is already moving on its own, aggressively,” Celentano said, “and that’s what’s been unique and great about what’s happening there.”