A hearing in Clairton, Pa. to discuss a settlement for air pollution violations at US Steel's Clairton Coke Works. Photo: Reid R. Frazier

Residents, workers air their responses to US Steel settlement 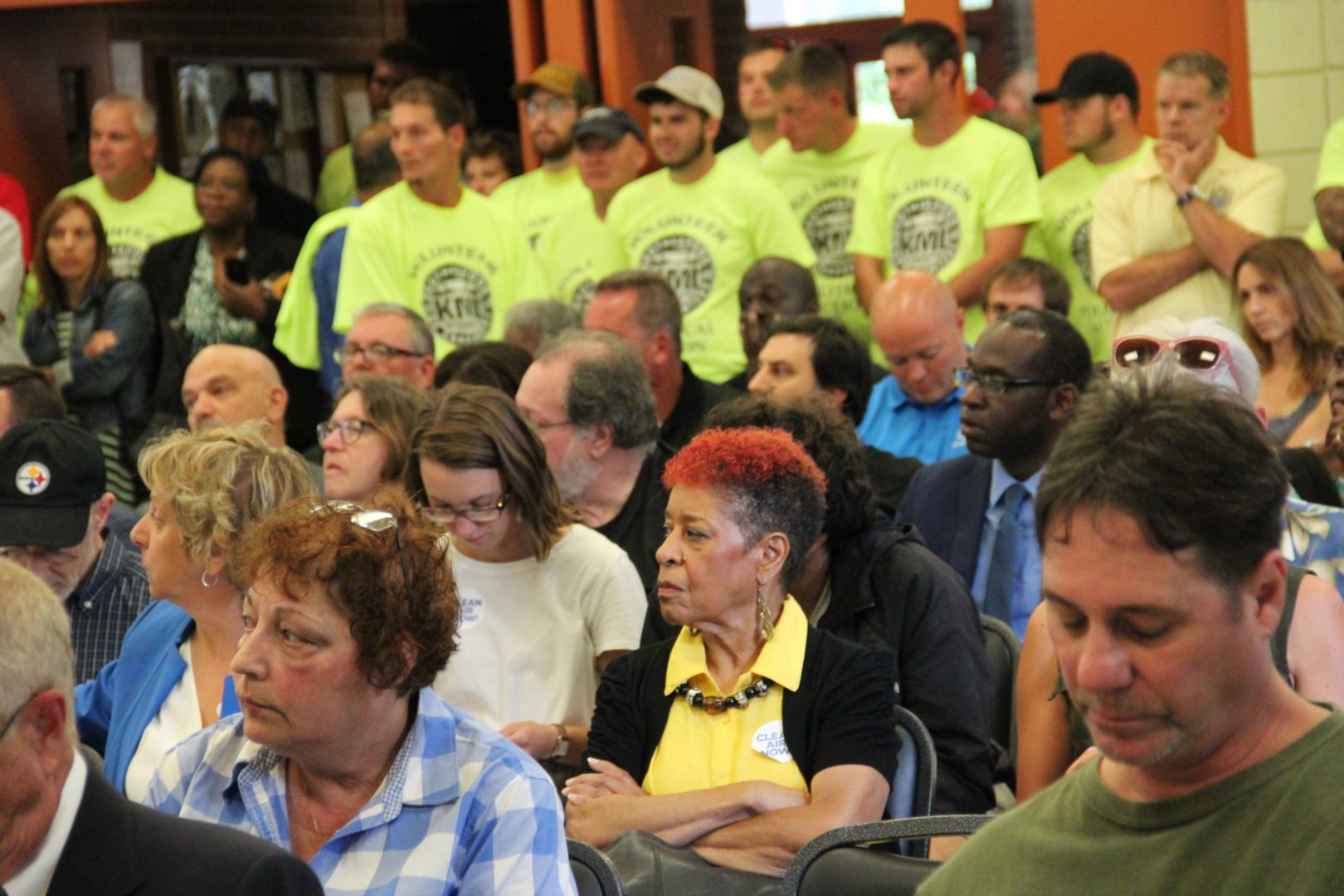 A hearing in Clairton, Pa. to discuss a settlement for air pollution violations at US Steel's Clairton Coke Works. Photo: Reid R. Frazier

A draft agreement between US Steel and Allegheny County officials does not go far enough, environmental advocates and some residents said at a public hearing on the agreement Tuesday night.

But several workers at the company’s Clairton coke works say the agreement will make the air in Pittsburgh cleaner while keeping them at work.

The hearing was held Tuesday night to discuss a $2.7 million settlement drawn up by US Steel and the Allegheny County Health Department last month. The county could try to change the agreement based on public comment.

In June, the county health department announced the draft agreement to resolve multiple air pollution violations at US Steel’s Clairton Plant over the past two years.

In addition to the $2.7 million fine, the agreement put in place a suite of pollution upgrades at the plant. The company said the price of those upgrades is $200 million.

At a hearing on the agreement Tuesday night in Clairton, a packed room heard testimony from residents fed up with the region’s poor air quality, public health and environmental advocates, workers at the plant, and US Steel executives.

Company officials testified that the upgrades were part of a broader investment by the company that will result in “significant” reductions in air pollution.

“This project shows our continued commitment to improve air quality in the Mon Valley,” Barshick said. 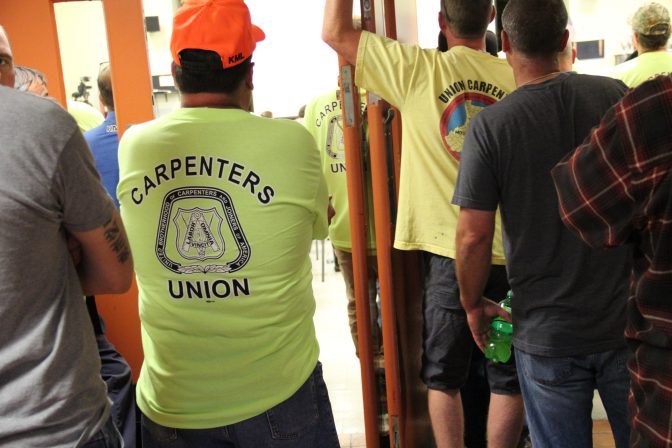 Members of the Carpenters’ Union came to a meeting on the Clairton Coke Works to voice their support for the plant. Photo: Reid R. Frazier

The agreement does not resolve legal issues between the county and the company over air pollution problems that resulted from a Dec. 24 fire. That fire knocked out pollution controls at the plant for more than three months.

Deborah Gentile, an allergy and asthma specialist at East Suburban Pediatrics, testified that a study she performed showed that visits to emergency departments and outpatient clinics for asthma went up in the two months following the fire. She testified she had conducted the study by querying a local health system database and found that compared to the same time period from the year before, acute asthma visits nearly doubled.

Gloria Ford of Clairton said she had to go to a hospital earlier this month because she had trouble breathing the air. She implored the health department to hold the company accountable to clean air laws.

“US Steel acts with impunity. God forbid that the unhealthy air we breathe would be put upon them and their families,” she said.

But many testified in favor of the agreement.

Bob Breisinger of Jefferson Hills said he was glad to see US Steel’s billion-dollar investment in the region after seeing steel mills lay off workers for years.

“Now people are protesting against US steel investing in this valley. Has US Steel been perfect? No. They have not been perfect. However they are trying to do the right thing,” Breisinger said.

Scott Cameron, who works at Clairton Coke Works in one of its pollution control units, also spoke in favor of the agreement.

“It’s important. The jobs are important. Clean air is important. I think the agreement will help communities around here, it could benefit them more,” Cameron said.

The agreement includes a requirement that US Steel install air curtains for Battery B, one of 10 coke oven batteries at the plant, to improve the capture of fugitive emissions. It also calls for repairs to the wall of Battery 15, to cut down on leaks, and upgrades to pollution capture structures called bag houses at several of the batteries.

The agreement also calls for a new, taller stack at Battery 15, to increase the dispersion of pollution from the stack, and the reconstruction of several flues on some of the plant’s coke batteries.

Most of the $2.7 million penalty will be disbursed to local communities impacted by the plant’s air pollution.

In addition, the company would submit to annual performance audits by a third-party pollution specialist, expand environmental compliance training at the plant, and increase its reporting to the county.

Environmental groups praised some of the provisions of the agreement, but in a letter submitted to the health department, a dozen groups said it did not go far enough in serving as a deterrent to future air pollution.

Matthew Mehalik of the Breathe Project said it won’t address aging, leaking equipment at the plant.

“We know a lot of these batteries date to the 1950s and what’s specified in the agreement doesn’t address those core problems,” Mehalik said. “And so they may be putting some equivalent of band-aids on those, but at the end of the day you have old leaking problems and not a clear plan of replacing them.”

County officials have blamed  Clairton for making the air in the Pittsburgh region worse in the past five years.

To make coke, a key component of steelmaking, the company bakes coal at high temperatures at Clairton. The facility is the county’s largest source of fine particles, and is a large source of pollutants like sulfur dioxide, hydrogen sulfide and carcinogens like benzene.

The county’s air quality monitor in Liberty, a mile downwind from the plant, has shown increasing levels of pollution since 2014, and is the only monitor in Allegheny County that is out of compliance for EPA air quality standards.

In 2017, the Liberty monitor recorded the highest year-round amount of fine particles of any air monitor east of the Rockies, according to EPA data.