Protesters blocked pipeline construction equipment on the property of The Adorers of the Blood of Christ, an order of Catholic nuns, in Lancaster County last year. 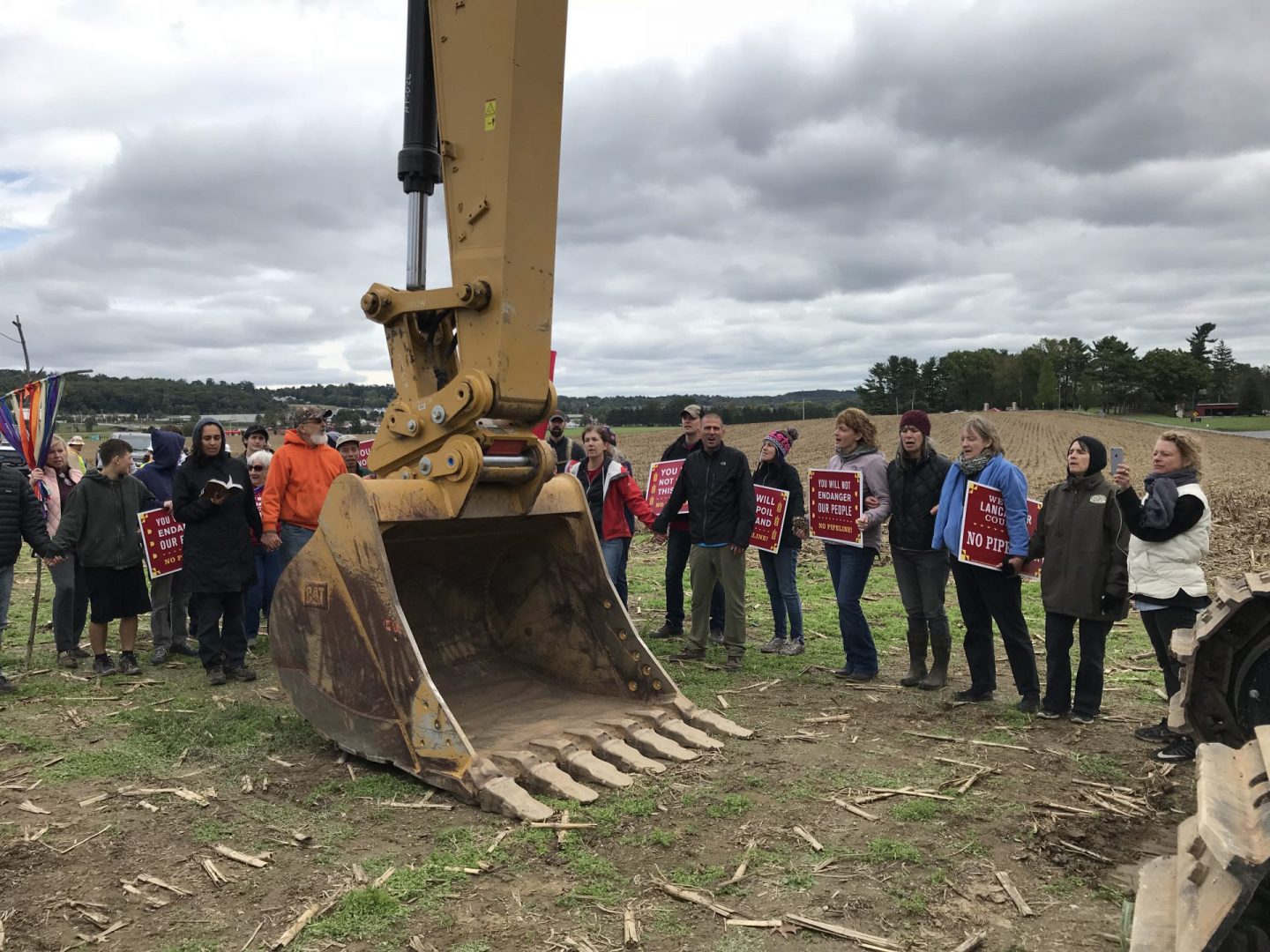 Protesters blocked pipeline construction equipment on the property of The Adorers of the Blood of Christ, an order of Catholic nuns, in Lancaster County last year.

Judge Howard Knisely of the Lancaster County Court of Common Pleas released the defendants without charge after the district attorney dropped the misdemeanors in exchange for community service.

The judge welcomed the agreement and said peaceful, nonviolent protest is protected, albeit with limitations, by state and federal law. Legislatures, not the courts, are the proper place to protect the natural environment and public safety, he said.

But he urged citizens to elect lawmakers who truly represent public interests rather than their own.

“We must all be more vigilant to elect to those legislative positions persons who are highly concerned with their local constituents and local problems, and not those who merely look for personal advancement or who look to industry to fill their coffers for re-election,” he said in court Monday.

The pipeline, which went into service in September 2018, carries natural gas south from the Marcellus Shale through 10 Pennsylvania counties. It has stirred significant opposition in Lancaster County.

Mark Clatterbuck, a spokesman for the defendants, said they were “thrilled” with the dismissal, which he said shows that people have a right to protest pipelines.

“It was very good news,” he said. “It shows that communities that peacefully defend their health and safety and protect the earth against the gas industry were vindicated this morning.”

Clatterbuck said the prosecutor’s decision to withdraw the charges shows that the state realized it was wrong to press charges against defendants such as a retired school teacher and an 88-year-old woman.

“They realized that, when it comes down to it, we don’t want to find these people guilty,” he said.

Barbara VanHorn, 88, one of the seven defendants and a member of the protest group Lancaster Against Pipielines, said the outcome should encourage protesters against other pipelines such Mariner East, which has stirred widespread community protest, especially in the Philadelphia suburbs. “I’m talking about any pipeline and any gas company,” she said.

Lancaster Against Pipelines issued a statement predicting that the outcome will strengthen the hand of those who say that pipelines carrying fracked gas threaten public safety and exacerbate climate change.

“It’s our hope that the state’s decision to dismiss our charges will strengthen our collective resolve to respond with bold, peaceful mass actions until we dismantle the gas industry’s stranglehold on our state,” the group said.

It called Knisely’s warning to state lawmakers an “extraordinary” statement from a sitting judge, and predicted that representatives who seek to limit protests against fossil fuel infrastructure will find themselves voted out of office.

In October 2017, VanHorn and 22 other protesters were arrested outside a pipeline construction site at West Hempfield Township in Lancaster County, and charged with defiant trespass after blocking construction. Sixteen of those arrested pleaded “no contest” to the charges, but the seven cleared on Monday pleaded “not guilty” in order to force the matter into court, Clatterbuck said.

The West Hempfield site is owned by the Adorers of the Blood of Christ, an order of Catholic Nuns that refused offers of compensation from the pipeline company, Williams.

The company then took the land by eminent domain, and the nuns sued Williams, saying their religious rights had been violated. The nuns also sued the Federal Energy Regulatory Commission, which approved utility status for the pipeline, allowing Williams to take their land by eminent domain.

The nuns, who number about 15 in West Hempfield, argued that they have a spiritual responsibility to protect the natural world from the fossil fuels that are now carried in the pipeline. After losing in an appeals court, they took their case all the way to the U.S. Supreme Court, which refused to hear it in February this year.

Sister Bernice Klostermann, one of the nuns, said she was “overwhelmed” by the dismissal of the charges. “It just stirred in my heart such gratitude to God,” she said.

Although the nuns have lost their legal challenge, and the pipeline is now operational, Sister Klostermann, 78, said Monday’s outcome will give pipeline opponents hope that their protests may still be upheld by the legal system.

“One of the things they can take from this decision is that there is hope in our court system, that the people will be heard as well as big money makers and corporations,” she said.

The nuns’ challenge, she argued, “has caused a lot of people to take a look at what’s really going on, who’s running our country, who’s behind a lot of our laws, and why are they are allowed to do things like this.”

Williams responded to the dismissal of charges on Monday by citing an appeal court ruling that the pipeline would not interfere with the nuns’ religious rights.

“In July 2018, the U.S. Third Circuit Court of Appeals dismissed the Adorers case, agreeing with an earlier ruling from the U.S. District Court for the Eastern District of Pennsylvania that the Adorers failed to establish how Transco’s right of way on their land will in any way affect their ability to practice their faith and spread their message,” the company said in a statement.

Atlantic Sunrise expands the existing Transco system that provides about a third of the natural gas consumed in Pennsylvania and about 15 percent nationwide, said Williams spokesman Christopher Stockton. Rebuffing claims by some critics that Atlantic Sunrise gas is used for export, he said the “vast majority” of gas carried by the line is consumed domestically.

Brett Hambright, a spokesman for the Lancaster County District Attorney’s office, declined to say why the charges were dropped but said the defendants had agreed to do an unspecified amount of community service in exchange.