Janice Blanock speaking to a crowd at a meeting about cancer cases in Canonsburg, Pa. Her son Luke died of Ewing sarcoma in 2016.

‘Something’s wrong here’: Washington County parents want Pa. to look deeper at whether fracking could be related to cancer cases

Pediatrician: Plenty of other potentially harmful environmental hazards in the area 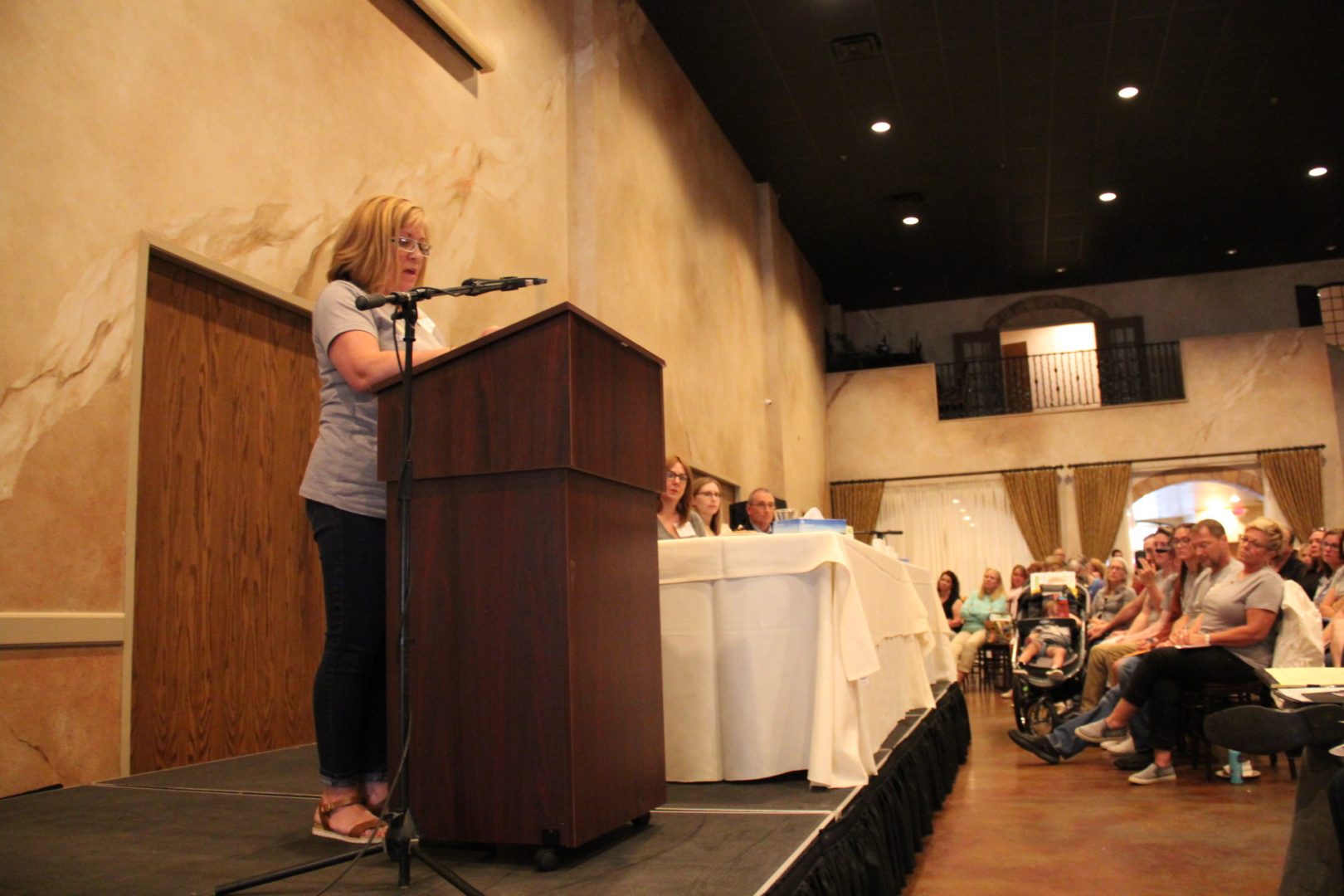 Janice Blanock speaking to a crowd at a meeting about cancer cases in Canonsburg, Pa. Her son Luke died of Ewing sarcoma in 2016.

Cindy Valent says her youngest son Curt had a smile “that would light up a room.” He loved sports like baseball and hockey — he aspired to have a job that paid well enough to afford Pittsburgh Penguins season tickets.

But in his first year in college, Curt started complaining about a pain in his shoulder. A doctor told him it was probably from sleeping on it wrong. The pain didn’t go away. A year later, Curt got a bitter diagnosis: Ewing sarcoma, an extremely rare bone cancer.

“He had a very small tumor in his shoulder. But he had a mass in his liver — it was in his liver, lungs, lymph node and spleen,” Valent said.

He underwent treatment, but Curt Valent died three years later, in 2011, just after his 23rd birthday. At the time, Cindy Valent had no thoughts that what happened to Curt was anything but horrible luck. “Curt would say, ‘(Stuff) happens, Mom.’”

But then over the next few years, two other young men in her town of Cecil died of Ewing sarcoma, which only occurs in about 200 cases a year in the U.S. The two young men, Kyle Deliere and Luke Blanock, both lived within a mile of Valent’s home.

“I said, you know, something’s wrong here. Something is really wrong, for as rare as this disease is, how do we get three? Boom-boom-boom,” said Cindy Valent, who has since moved to Beaver County to be closer to her five grandchildren.

A thought crept into her mind: Did fracking have anything to do with Curt’s cancer?

The Pennsylvania Department of Health says there is no cancer cluster in Washington County. But Valent and others who’ve been affected by the high occurrence of rare tumors there want the state to take a closer look to see if the natural gas industry or other environmental causes could be to blame.

More than 1,800 deep shale gas wells have been drilled and fracked in Washington County, the most of any county in the state. A network of pipelines, compressor stations, and processing plants has sprung up to handle that gas.

Valent said when fracking first came to Washington County, in 2004, she thought the industry would be good for those who’d leased their land for drilling.

“I thought the farmers are going to finally get a break. It’ll be wonderful for them,” she said. At night, she could see flares from gas wells nearby.

“(We’d say) ‘Oh that must be the oil rig out there flaring up — look at that light up the sky,’” she said. “Never, ever would I have connected any of this till after Curt had passed away.”

Three other cases of Ewing sarcoma were identified in the Canon-McMillan School district, which includes the Valents’ and Blanocks’ hometown of Cecil. 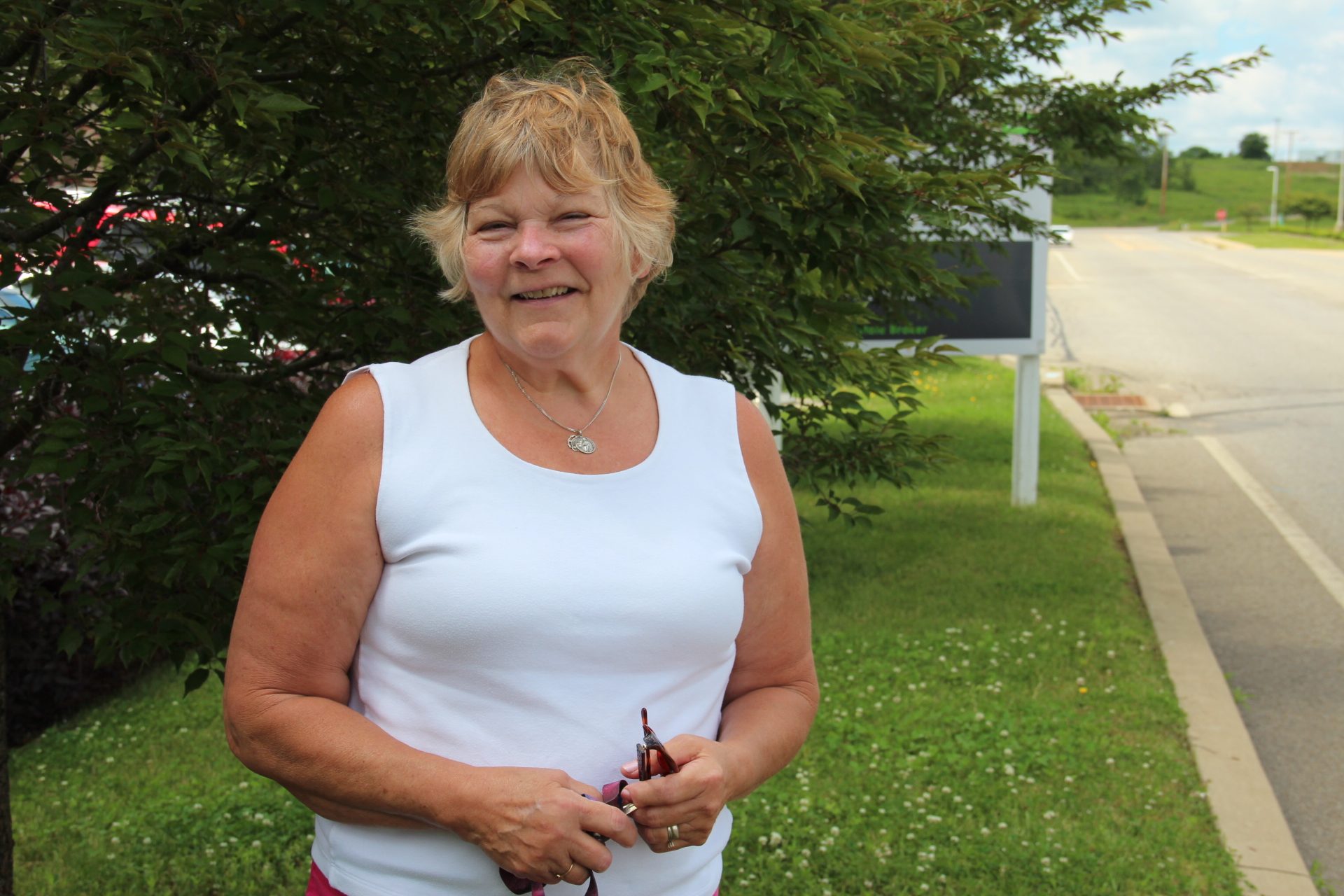 And a dozen more cases were identified in Westmoreland County by a group that included a researcher at St. Vincent University.

News of those cases was published in the Pittsburgh Post-Gazette, which identified a total of 27 cases of Ewing Sarcoma in four counties in southwestern Pennsylvania.

Now, many in the community want answers.

At a recent public meeting organized by the Southwest Pennsylvania Environmental Health Project, Janice Blanock, whose son Luke was a neighbor of Curt Valent’s, and who died of Ewing sarcoma in 2016 at the age of 19, said she doesn’t know if anything caused her son’s cancer. But she wants the state to find out.

“No parent should ever have to watch their child suffer and die, especially when there is even the slightest possibility that it’s something in the environment that could cause it,” she said. “If the only way to carry on Luke’s name is to fight for a clean, safe and healthy environment, then so be it.”

Ned Ketyer, a pediatrician with Allegheny Health Network Pediatrics — Pediatric Alliance, said at the meeting there was no shortage of potentially harmful environmental hazards in the area, including acid mine drainage, leachate from landfills, and former uranium and radium sites. The district includes a former radium and uranium plant in Canonsburg. The old Standard Chemical Company site, where more than 200,000 tons of contaminated waste are buried, has polluted groundwater nearby and is monitored by the Department of Energy.

Ketyer said the state also should look at fracking, which produces wastewater high in naturally occurring radioactive materials, can produce air emissions like volatile organic compounds, and which has damaged over 300 underground water supplies in the state.

“Harmful emissions from expanding unconventional natural gas infrastructure, including carcinogenic and endocrine disrupting chemicals and radiation into the air and water, seriously has to be investigated,” Ketyer said.

The Pennsylvania Department of Health looked at the cancer cases in Washington County and the Canon-McMillan school district and found rates of Ewing sarcoma weren’t “consistently or statistically significantly higher than expected” there.

The study did find that between 2005 and 2017, rates of Ewing sarcoma were three times higher than expected in the school district. The rare tumor mainly affects young people and can be fatal.

The authors said the number of cases was so small — just three instances of Ewing sarcoma in the district over those years — that the higher-than-expected rates weren’t “statistically significant.”

But that study excluded two recent cases of Ewing sarcoma, and one where the patient’s address was mis-identified.

Nate Wardle, a Department of Health spokesman, said in an email the study used “the location and address of the patient at time of diagnosis, as well as their current address, as recorded by the physician” who entered the case into a statewide cancer registry.

“We will continue to review the previously conducted study on cancer incidence in Washington County, including using new data as it is introduced while compiled into the cancer registry, as we work to protect public health,” Wardle said.

No one from the department of health or the governor’s office agreed to be interviewed for this story.

About 800 people and organizations signed on to an open letter to Gov. Tom Wolf calling for a pause on all new drilling permits and for the Department of Health to conduct “an investigation into cancers diagnosed in all counties where shale gas drilling, fracking and infrastructure buildout has occurred.”

In response, Wolf released a letter that said the natural gas industry “is providing economic benefits to the commonwealth” and that the state Department of Environmental Protection is thoroughly regulating it.

“Despite powerful opposition, we have put in place new protections to more rigorously protect the air we breathe, the water we drink and the land where we live,” the statement said.

The industry agrees it’s stringently regulated, and rejects any attempt to link its practices to any disease.

“It is shameful to exploit the very real and heart-breaking issues associated with childhood cancer; they should not be fodder to advance a political agenda,” Marcellus Shale Coalition President Dave Spigelmyer said in a separate letter to Gov. Tom Wolf, responding to the call for a permit freeze.

Epidemiologists say it is rare to prove an environmental cause for a cancer cluster, which is defined by the Centers for Disease Control and Prevention as an unexpectedly high number of cases of a specific type of cancer in a specific time and place.

One study found that out of 576 potential cases, scientists were able to verify a statistical “cancer cluster” in only 13 percent of them, and were able to prove an environmental cause for just one of them.

Unlike other cancers, Ewing sarcoma has no known environmental causes. But, Evelyn Talbott, of the University of Pittsburgh’s Graduate School of Public Health, says there’s some evidence linking pesticide exposure with the disease. Two studies found a nine-fold increased risk of Ewing sarcoma for children whose parents worked as farmers or in agriculture.

Talbott, who grew up in the Canon-McMillan school district, and remembers picking apples in orchards there, said historical pesticide use in the area’s agricultural fields “might be worth studying.”

She says the best way to test for a cause would be to conduct a “case control study,” where scientists compare information from people who’ve gotten a disease with a “control” group of similar people who have not.

Wardle, of the Department of Health, said the agency “is considering the feasibility of a number of study approaches” including a case control approach.

Valent says she just wants clarity. She knows it won’t bring back Curt.

“The only thing I want to see is if anything triggers this,” she said. She wants to find out “what’s going on, to save other kids and other families.”