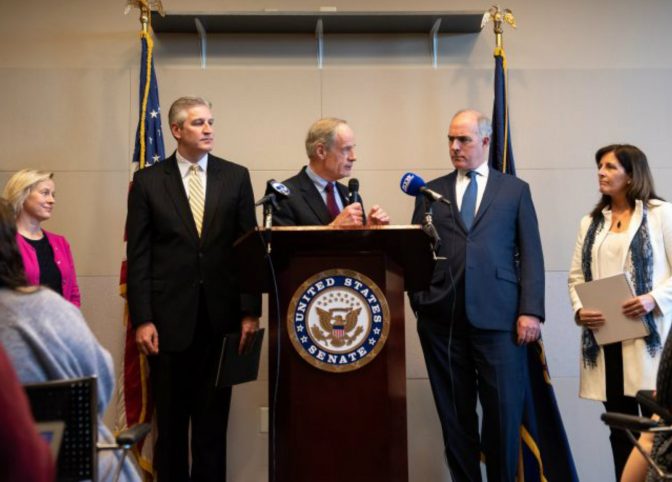 Democratic U.S. Sens. Bob Casey of Pennsylvania and Tom Carper of Delaware met with local politicians and community leaders from Bucks and Montgomery Counties Monday to discuss the remediation of a toxic class of chemicals known as PFAS, which has contaminated drinking water supplies across the country.

They left the meeting with a new commitment to get the PFAS Action Act — a bill introduced by Carper and co-sponsored by 30 senators including Casey — through Congress by attaching it to the Defense Authorization Act, a must-pass piece of legislation that funds the military and is voted on every two years.

“The time for examination is over,” Casey said. “These families need answers and action.”

The bill would force the EPA to list PFAS as hazardous chemicals, which would open up Superfund dollars to clean up contaminated sites, and would also force polluters to take charge of remediation efforts, and ultimately pick up the tab.

Carper said including the bill as part of the Defense Authorization Act will increase the likelihood of its passage.

“[The Defense Authorization Act] is like a locomotive, to which are appended a lot of rail cars, or in this case, a lot of pieces of legislation,” he said. “Some of them have a lot to do with defense, some of them frankly not so much.”

“[The PFAS Action Act] is germane,” he continued. “It involves hundreds of congressional districts across the country, thousands of communities, and it’s a defense-related issue.”

The meeting included state politicians, such as state Sen. Maria Collett and state Rep. Todd Stephens, as well as municipal and community leaders from Horsham, Warminster, and Warrington, communities whose drinking water was contaminated by PFAS-containing firefighting foam used at former military bases nearby.

Members of the community voiced their frustration at the lack of federal action when it comes to PFAS regulation.

The EPA announced a PFAS Action Plan in February but didn’t give a timeline for when drinking or groundwater standards would be passed. EPA Administrator Andrew Wheeler signaled the agency would determine whether to issue a maximum contaminant level for PFAS in drinking water by the end of the year, but that would push an enforceable standard to 2023 at the earliest, according to most estimates.

Appending Carper’s bill to the defense legislation would take time as well. That bill is reauthorized every two years, usually toward the end of a legislative session, meaning passage would not occur until 2020 if it survives the legislative process.

“Of course we want something sooner,” said Hope Grosse, who heads the Buxmont Coalition for Safer Water and participated in the meeting. But, she said, “at least there’s something on the table that has direction and has deadlines.”

Joanne Stanton, another member of the Buxmont Coalition who spoke with the senators, felt buoyed by the meeting.

“It was very encouraging to know that we have such support in the Senate,” she said, adding she is hopeful that if Carper’s bill is attached to the defense bill, “help will come and funds will finally be able to be disbursed to communities like ours in need.”

Collett stressed that even with strong support from the Senate, Pennsylvania needs to proceed with its own regulation of PFAS.

“If the EPA actually comes out and sets a standard that actually is going to work for us, fantastic,” she said. “I will be the biggest champion for that kind of legislation and that kind of movement.”

Collett has issued a bill in the state legislature that would label PFAS as hazardous substances and would require the state to come up with a maximum contaminant level in drinking water.

In addition to the work happening in the state legislature, Pennsylvania Gov. Tom Wolf established a PFAS Action Team last fall to address growing concerns about these chemicals across the state.

That team will hold a meeting next week at Abington High School to discuss a plan to sample potentially contaminated drinking water sources and to delve further into the results of a pilot blood study conducted by the state Department of Health last year.

In the meantime, Casey said he found the stories of community members “sobering” and plans to use that information to help push Carper’s bill through Congress.

“People in both Montgomery and Bucks County have a right to know what’s in their water and what the health impacts are for them, for their families, and for their communities,” he said.