Hydrogen fuel cell buses are on tap for 2020 Olympics, and more fuel stations are planned 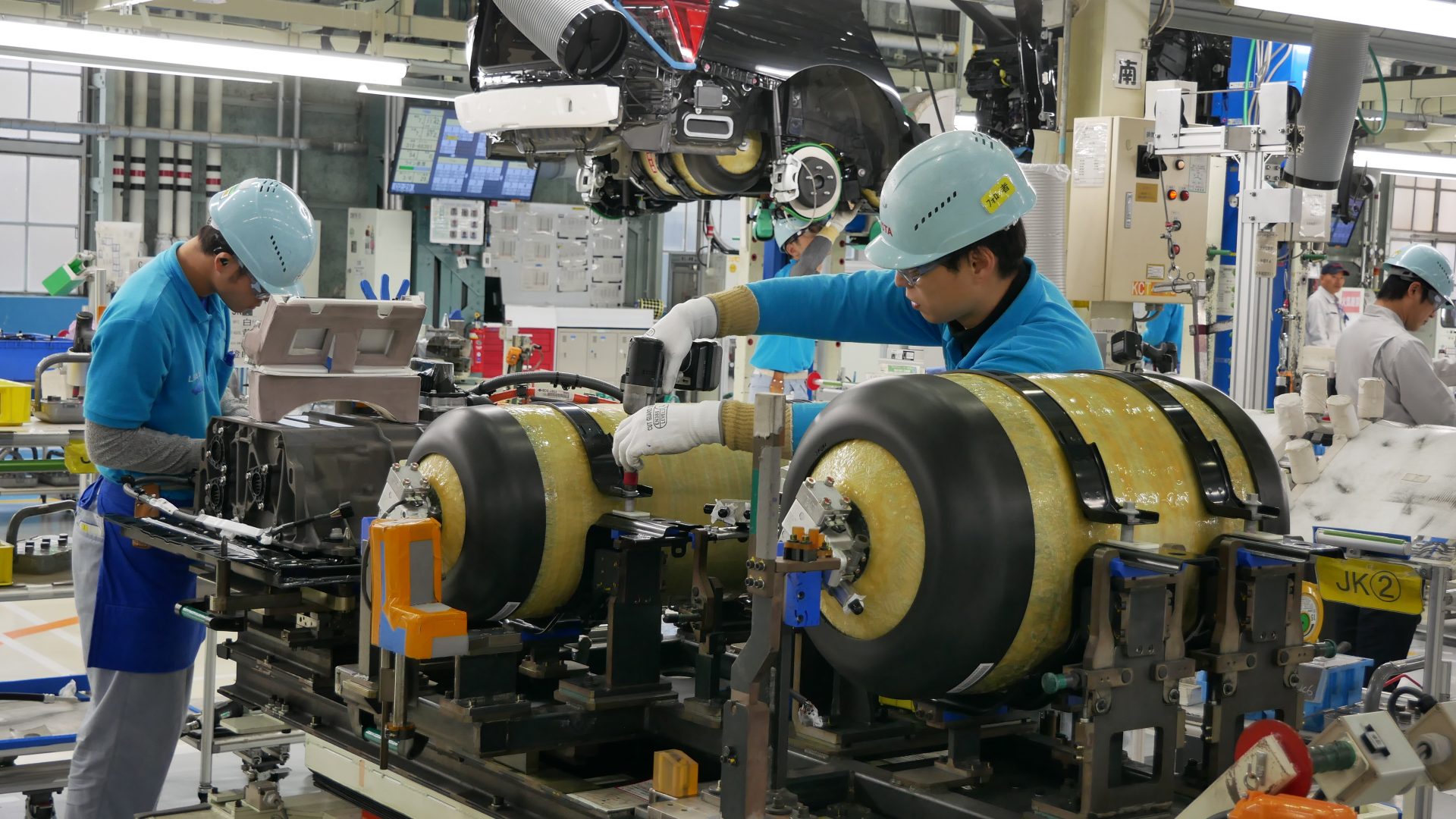 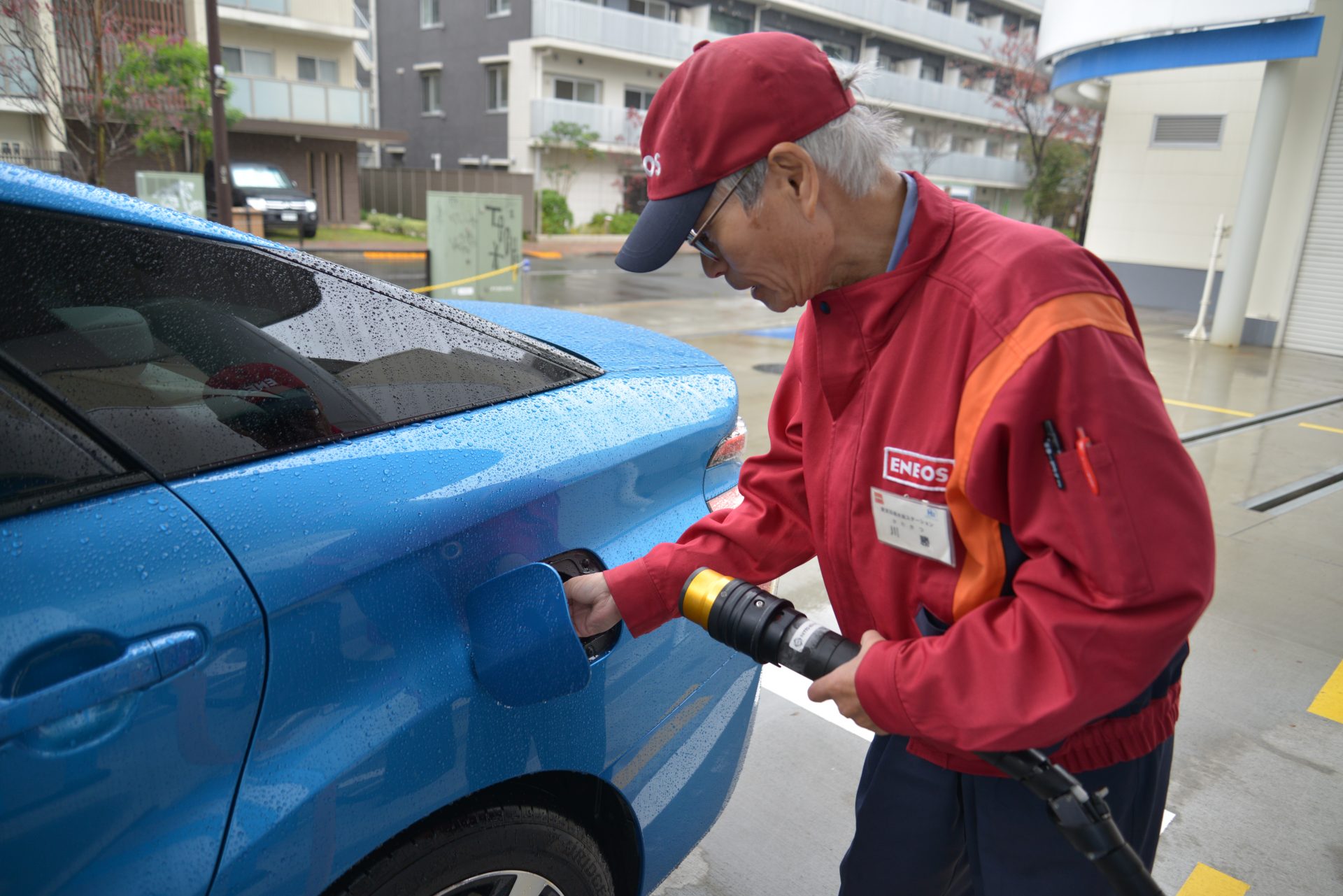 Hydrogen fuel station attendant Ken Kawakatsu fills the tank with hydrogen gas cooled to minus 35 degrees celsius. He says this Tokyo station gets about a dozen customers a day.

When it comes to electric cars, battery-powered vehicles dominate the roads. Sales of battery electric cars are set to take off.  Auto companies are making more models, and countries are passing regulations to reduce carbon emissions. Even states like Pennsylvania have a plan to encourage more residents to buy battery electrics.

But Japan isn’t sure that’s the future — or, at least, the only future for electrified transportation. The country has ambitious goals to become the “hydrogen society,” and right now, the focus is on its automakers.

This tiny factory, within Toyota’s larger Motomachi plant, produces only about 10 cars each day. All are assembled by hand.

“I believe in the future of hydrogen,” he said. “It’s very important for the [environment].”

“Sometimes I have problems [filling up] with hydrogen,” he said. “There are not enough stations and the hours are very limited.”

A hydrogen fuel cell doesn’t burn anything — it uses a chemical reaction between the hydrogen and the oxygen from the air to produce electricity — and hydrogen-powered cars emit only water. So in a world striving to reduce its carbon emissions, it sounds like a great alternative to the internal combustion engine.

But the Mirai is expensive — even with generous Japanese government subsidies that bring it down from the equivalent of $70,000 to $50,000. The largest cost is the fuel cell, which Toyota says will drop as production ramps up. 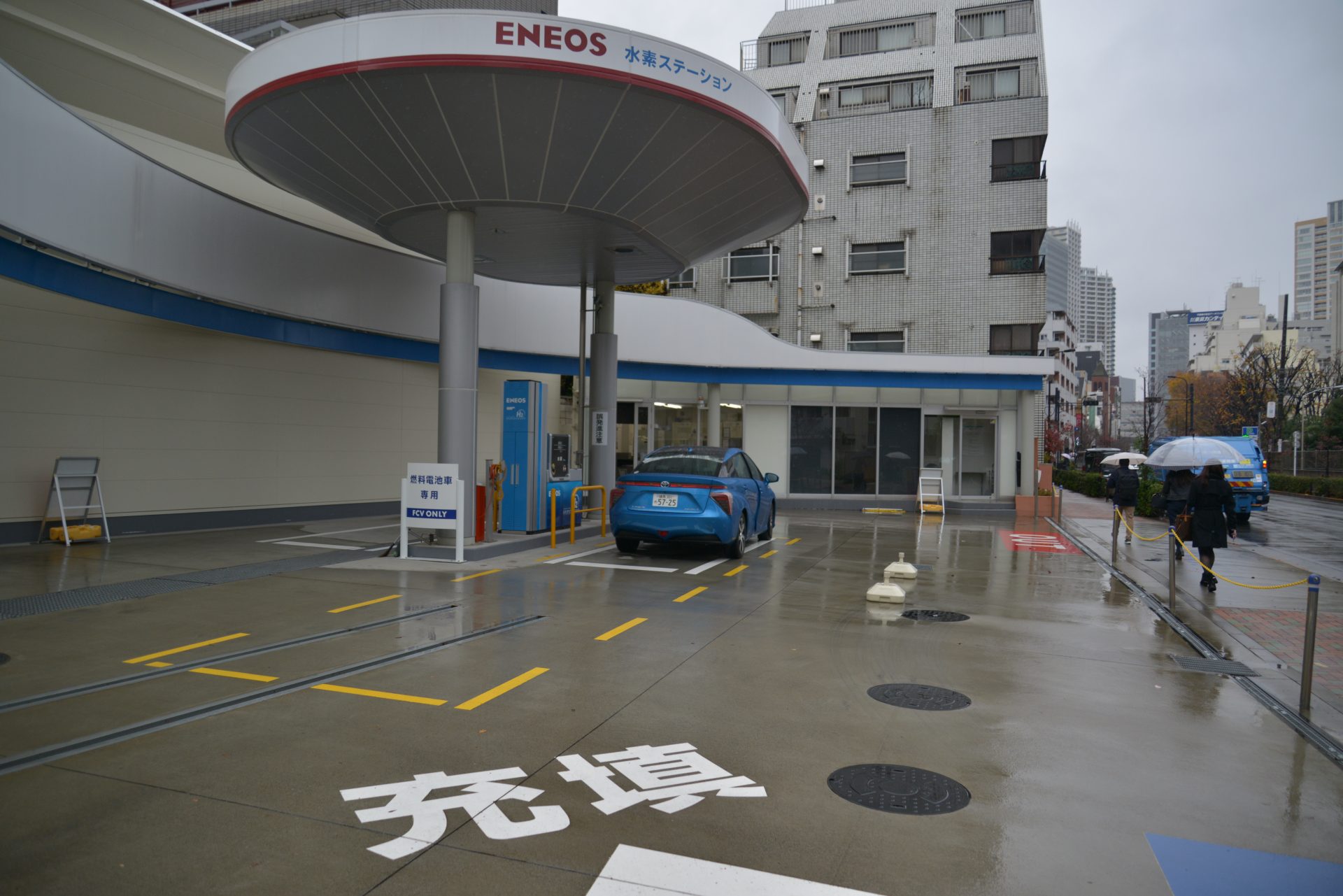 A hydrogen fueling station in Tokyo. Only about 100 of these exist in Japan. This one gets at most 15 customers a day. (Hiroo Saso)

The lack of hydrogen fuel infrastructure challenges automakers. Only about 11,000 fuel cell vehicles are on the road worldwide, according to Juan Pontes with EV Volumes. About half are in California, where strict emission regulations and tax credits incentivize electric vehicles. It’s hard to convince consumers to buy a car they can’t easily fuel up. And it’s just as difficult to get energy companies to build the infrastructure if there aren’t enough vehicles to make it profitable.

Part of Japan’s goal to be the first “hydrogen society” includes a target of building 900 hydrogen fueling stations by 2030. The country’s roughly 100 stations were subsidized by the government with continued operational support from manufacturers like Toyota.

The energy ministry has ambitious goals in the lead-up to the 2020 Olympics. The city of Tokyo plans to deploy 100 hydrogen fuel cell buses for the games, with a longer-term goal of 200,000 such vehicles in the next six years.

But in countries like Japan, where much of the population lives in dense urban areas, it’s not easy to charge up a battery electric vehicle. It’s here where companies like Toyota are banking on the convenience of hydrogen over plug-ins. 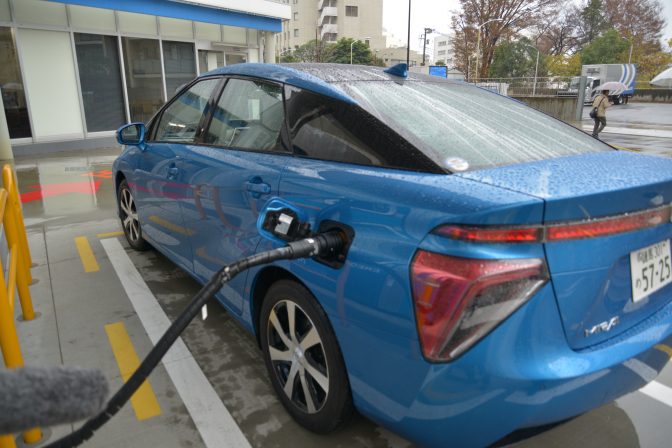 The Mirai at a hydrogen fueling station in Tokyo. (Hiroo Saso)

“There’s just no behavior change as long as you have [hydrogen] infrastructure in place,” he said. “We go to the same gas station and fuel up in the same few minutes and just keep on tootling on. And I think that is ultimately the reason that Toyota and other carmakers now have more interest in fuel cells.”

Klippenstein says he sees the divide between hydrogen fuel cells and battery electric plug-ins tracking the parallel path as the gasoline and diesel split familiar to American consumers.

“We will see a similar split where batteries will, for decades at least, dominate the light duty vehicle passenger cars whereas fuel cells will ultimately win out in the heavier applications.”

In South Korea, where the majority of residents also live in urban areas, automaker Hyundai just announced that it plans to produce 700,000 fuel cell cars a year by 2030.

A new hydrogen fuel plant is rising several yards from Fukushima’s Daiichi nuclear power plant, the site of the nuclear plant meltdown after the 2011 tsunami.

That accident forced Japan to shut down all of its nuclear reactors, which had provided about one-third of the country’s electricity. Eight have since re-opened. Despite that energy source, Japan has always had to import all of its fossil fuels and is the world’s No. 1 importer of liquefied natural gas, according to the U.S. Energy Information Administration. 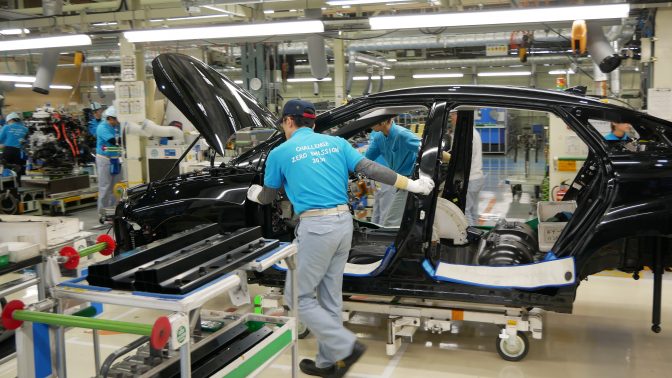 Workers push a partly assembled Mirai through the assembly line at Toyota’s LFA Works in Aichi Prefecture, Japan. Since there are so few hydrogen fuel cell cars manufactured, all of them are assembled by hand. (Hiroo Saso)

But hydrogen is abundant, and the fuel could be produced anywhere.

Ken Koyama from the Institute of Energy Economics, a Japanese think tank, agrees that hydrogen is a good bet for Japan.

“We are always talking about the long run future,” Koyama said. “It’s not the next year or a five-year time horizon. It’s a 20-year, 30-year, 40-year, 50 years because if we are really thinking about climate change it’s a long-, very, very long-term strategy is critical.”

Producing the hydrogen fuel is itself energy intensive. And critics point out that while the hydrogen fuel cell car emits only water, if fossil fuels are used to produce the hydrogen fuel, then the vehicles still contribute to global warming, just as battery electric vehicles charged with energy produced by coal plants can’t be considered completely carbon-free.

“So it’s not really clean if that is the case,” says Kimiko Haraka of the Kiko Network, a Japanese environmental group.

Haraka is critical of a plan by a number of Japanese companies, including Kawasaki Heavy Industries, J-Power, Iwatani Corporation and Marubeni, to build a plant in Australia that would use lignite coal to produce hydrogen for fuel cell vehicles. She also worries that the many subsidies for hydrogen come at the expense of promoting renewable energy.

Still, Bertel Schmitt, a former car industry advertising executive who lives in Tokyo, says it makes sense for Japan and its automakers to include hydrogen vehicles in their long-game plan.

“They pretty much realize that the exhaust regulations will get tougher and tougher,” he said. “What is being enacted right now, in 2020 in Europe, is nothing compared to what will come five years later, 10 years later.”

For now, though, Schmitt says the internal combustion engine remains the cheapest and most convenient car on the market. Despite massive investment, he says Toyota knows hydrogen won’t be taking over the roads anytime soon.

“They know that the guy sitting in the hydrogen fueling station will be very, very lonely for quite a while.”

Travel for this story was made possible with help from the International Center for Journalists.