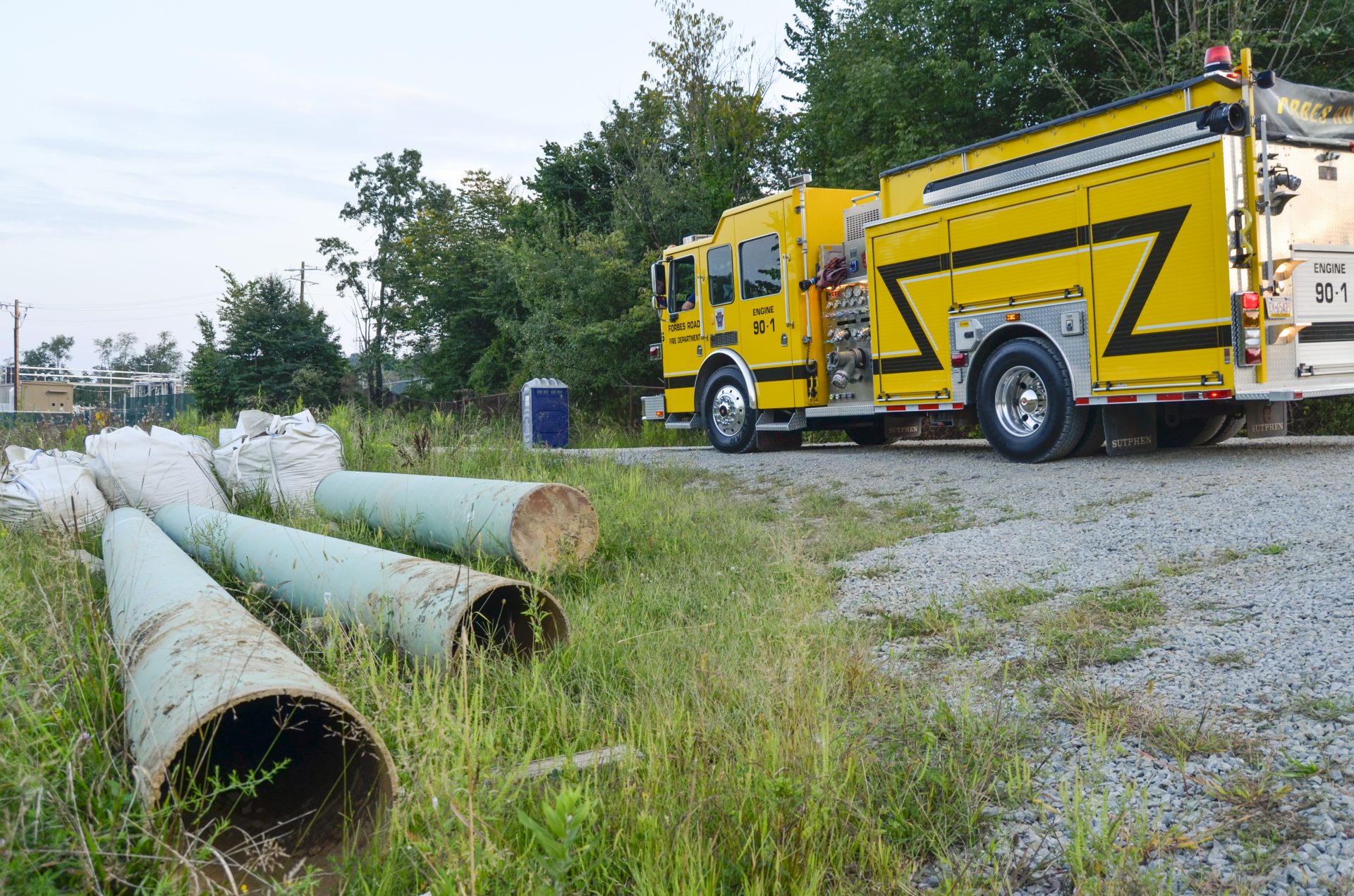 Seven residents of Chester and Delaware Counties are asking the Pennsylvania Public Utility Commission to stop Sunoco operating its controversial Mariner East pipelines, saying the company has failed to give the public enough information about what to do in the event of a leak of volatile natural gas liquids.

The residents filed a petition for emergency relief on Monday, seeking to immediately shut down  Mariner East 1, which is already carrying NGLs, and to block the startup of a new pipeline that the company calls the Mariner East 2, and plans to begin operating by the end of this year.

The emergency petition urges the PUC to stop operations of both pipelines until it holds a hearing on the matter. An accompanying “Notice to Defend” asks the PUC to permanently prevent operation of the pipelines, saying the project violates three state laws on the safe operation of utilities, and arguing that the PUC has a legal obligation to ensure pipeline safety.

The complainants argue that the new pipelines threaten public safety because of the highly explosive nature of the materials they will carry, and that Sunoco has not adequately warned the public on how to respond to any escape of NGLs.

They use the term “workaround pipeline” to refer to Sunoco’s current Mariner East 2 line, which will consist of sections of 20-inch and 16-inch pipe plus a temporarily repurposed 12-inch pipe. The 12-inch line was built in the 1930s and has a history of leaks including the escape of 33,000 gallons of gasoline into Darby Creek near Philadelphia in June this year.

Sunoco and its parent company, Energy Transfer, had to use other sections of pipe to complete the Mariner East 2 after safety and environmental accidents delayed completion of the line through the Philadelphia suburbs.

“ME1 is being operated, and the workaround pipeline is about to be operated, without an adequate emergency notification system or legally adequate emergency management plan,” the petition says, adding that the residents are “at imminent risk of catastrophic and irreparable loss, including loss of life, serious injury to life, and damage to their homes and property.”

The complainants, four from Delaware County and three from Chester County, say they have standing to file the petition because they live within a few hundred feet of either ME1 or the “workaround” sections of the ME2 pipeline; have children who attend schools near the pipeline; live close enough that they might have to be evacuated in the event of a leak; and regularly travel on roads near both pipelines.

Critics of the Mariner East project have long argued that it represents a greater danger to public safety than other pipelines such as those carrying natural gas or oil because the NGLs are highly explosive, can be ignited by common devices such as cell phones or doorbells, and cannot be detected by smell or sight. 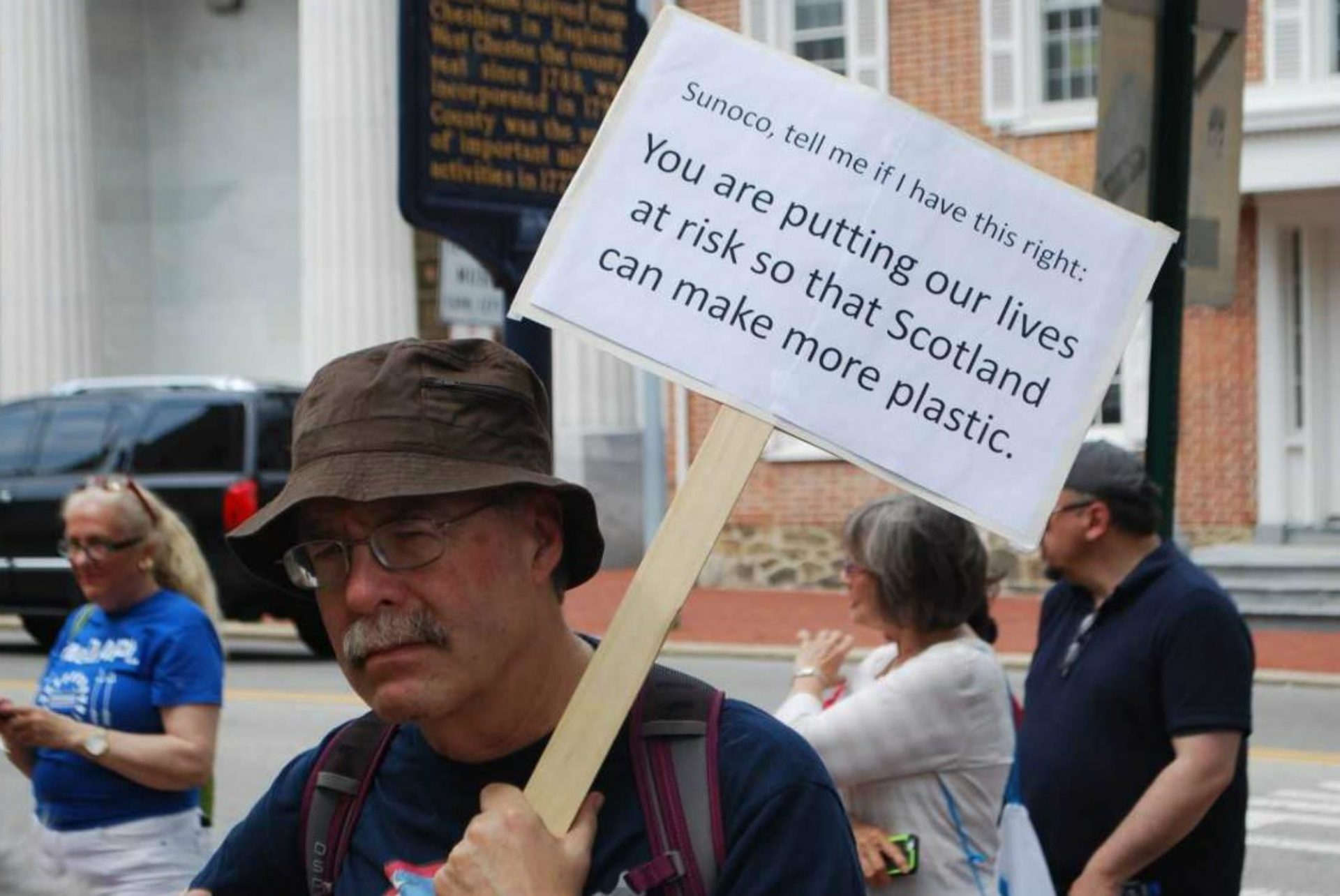 A sign at a June 9 demonstration in West Chester reveals one reason why some people oppose the Mariner East 2 pipeline project. (Jon Hurdle/StateImpact PA)

In case of a leak, flee on foot

The complaint derides Sunoco’s “one size fits all” instructions, in a color brochure mailed to some residents, to leave the area immediately on foot, abandon equipment being used near a leak, and avoid open flame or other sources of ignition.

The documents say the instructions contain nothing about how the public would be informed of a leak and the need to self-evacuate, how elderly people would be able to leave an area on foot, and how people could call the emergency services if they are warned not to use their phones.

“In the event of a highly volatile liquids leak without ignition, the safety of those in the probable impact zone relies heavily on anyone near the vapor cloud knowing exactly what to do to avoid ignition,” the complaint says.

Lisa Dillinger, a spokeswoman for Sunoco, said the company shared its materials on public awareness of the Mariner East project with the PUC, which allowed Sunoco to resume construction in West Whiteland Township, Chester County after a shutdown because of PUC safety concerns.

“Energy Transfer has a comprehensive, robust Public Awareness Program (PAP) that engages the community through a variety of communications methods, including targeted brochure delivery, face-to-face liaison meetings and specialized trainings,” Dillinger wrote in an email.

She said the company follows guidelines on written public communication from the American Petroleum Institute, and uses the same wording as PHMSA, the federal pipeline regulator, on mailers that inform the public on how to identify and react to a pipeline emergency.

Regarding the 12-inch line, she said it went through a $30 million upgrade in 2016, and that the PUC and PHMSA have verified the integrity of the Mariner East lines in recent months.

The Pennsylvania Energy Infrastructure Alliance, which advocates for pipeline construction, noted that Sunoco operates the Mariner Emergency Responder Outreach Program, which has trained 2,350 individuals since 2013.

Kurt Knaus, a spokesman for the alliance, said pipeline opponents ignore the state and federal safety regulations that companies like Sunoco are required to observe, and that “study after study” shows that pipelines are the safest way to transport energy resources.

In August, an independent risk assessment on the pipelines concluded that anyone living directly above all three pipelines has less chance of dying from an explosion of NGLs than from heart disease, but is more likely to die from such an event than from being hit by lightning.

The study, by the consulting company Quest, said the risk of death for anyone more than half a mile away from an explosion of Mariner East 2 is “essentially zero,” while that figure is a quarter of a mile for Mariner East 1. The $46,000 cost of the report was paid for by pipeline safety campaigners, including at least one township, who previously failed to persuade the PUC to do its own risk assessment.

In their complaint, the residents accused state authorities of failing to respond adequately to requests for emergency planning information from state lawmakers, school district superintendents and municipalities. “They have received incomplete responses or none at all,” the documents say.

They also accuse Sunoco of withholding emergency-planning information from the public by refusing to release an internal hazards analysis and an integrity management plan on the pipeline.

And they criticize plans by the Chester and Delaware County emergency services agencies to use “reverse 911” to call hundreds of thousands of phones in an affected area. That procedure would be at odds with warnings from Sunoco and from the federal Pipeline and Hazardous Materials Safety Administration not to use cell phones or conventional phones because they can ignite airborne gases, the documents say.

Tim Boyce, director of Delaware County Emergency Management Services, said phones likely wouldn’t be an ignition source for a leak of NGLs but he predicted that if there is a leak, it’s likely to find some other ignition source such as a car engine.

“If these products are released in our community, they are going to find an ignition source,” Boyce said. “There’s no reasonable person who says that if released in large quantity, it’s not going to ignite.”

Boyce declined to say whether he was satisfied that the people of Delaware County know how to protect themselves if there’s a pipeline leak, but acknowledged that his agency doesn’t have all the tools it would like to be able to notify everyone of such an incident.

“The tools we have really are incomplete for warning about a disaster,” he said.

The complaint says that by failing to provide adequate emergency-planning information to the public, Sunoco has violated state laws on creating a public awareness program, operating a utility safely, and building pipelines at least 36 inches below the ground and at least 50 feet from any private house.

In their petition for interim emergency relief, the residents argue that they meet all four conditions required: that they have a clear and immediate need; that their injury would be irreparable if not granted; and that the requested relief would not injure the public interest if granted.

PUC regulations state that petitions for interim emergency relief must be held within 10 days of the petition being filed. The same mechanism was used by State Sen. Andy Dinniman (D-Chester), whose petition to halt to construction in Chester County’s West Whiteland Township was granted by a PUC administrative judge in May, and later partially overturned by the full PUC.

The multibillion dollar cross-state project has experienced many delays and several construction shutdowns ordered by regulators or courts because of safety concerns and dozens of spills of drilling fluid since construction began in February 2017. When operational, the pipelines will carry ethane, propane and butane from western Pennsylvania and Ohio to a terminal at Marcus Hook near Philadelphia, where most of the material will be exported to Scotland for making plastic.

New website aims to be clearinghouse for shale research