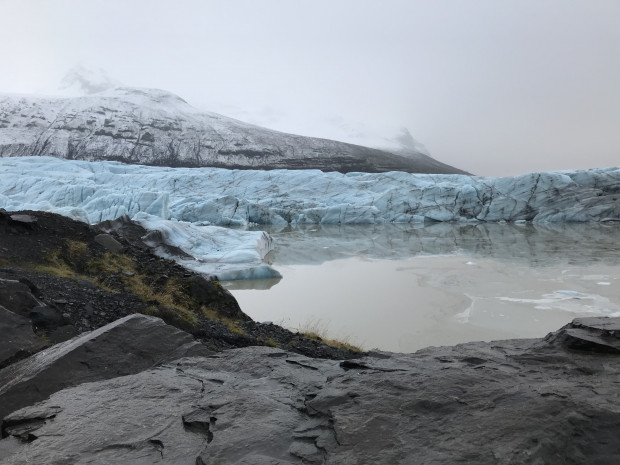 The Svínafellsjökull glacier in Iceland has retreated dramatically in recent years, revealing a visible sign of the changing climate. Since the early twentieth century, with few exceptions, glaciers around the world have been retreating at unprecedented rates. The melting ice contributes to global sea level rise.

A majority of Pennsylvania voters agree with the scientific consensus that climate change is causing problems right now, and more than two-thirds say the state should be doing more to address it, according to a Franklin & Marshall College/StateImpact Pennsylvania poll released Thursday.

Party affiliation and political ideology continue to play a big role in people’s views, according to Berwood Yost, director of F&M’s Center for Opinion Research.

Almost two-thirds of Republicans in the survey said climate change is causing problems now, or will at some point.

The survey was conducted over the phone and online, depending on the respondent’s preference, from March 19 through 26, and sampled 423 registered voters from across the state. The margin of error is plus or minus 6.8 percent.

The survey included a wide range of questions on issues and political office-holders and candidates. StateImpact partnered with F&M to include 13 questions on the energy-related issues of climate change and natural gas development. 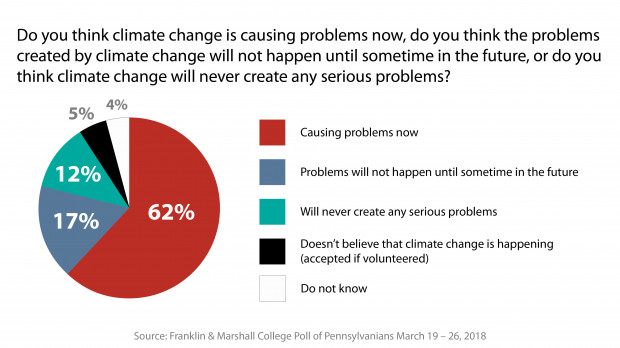 Only five percent of respondents said they do not believe climate change is occurring. Twelve percent said the sharp rise in global temperatures will never create any serious problems, while 17 percent said problems won’t happen until sometime in the future.

Among those who agree climate change is happening, 39 percent said they have personally experienced problems linked to the warming. More than two-thirds of respondents (69 percent) said Pennsylvania should pursue policies that support renewable energy over fossil fuels. 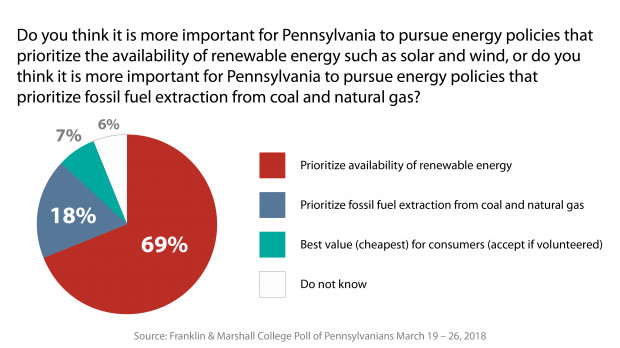 Among states, Pennsylvania is the third largest emitter of carbon dioxide, according to the U.S. Energy Information Administration. Although Governor Tom Wolf campaigned on a platform to address climate change, he has been criticized by environmental groups for failing to follow through on concrete steps to curb emissions.

According to the U.N. Intergovernmental Panel on Climate Change, the “human influence on the climate system is clear,” and climate change is already causing widespread impacts to human and natural systems. A national Gallup survey published Wednesday shows 45 percent of Americans believe the warming will pose a serious threat in their lifetime. That’s the highest percentage recorded since Gallup first asked the question in 1997.

Half of registered Pennsylvania voters say they support shale gas extraction, according to the F&M/StateImpact survey, but the results show attitudes souring somewhat, compared to previous polling by F&M.

“There is still support for it and people see some benefits — particularly economic, but there are increasing concerns about the environmental impact,” Yost said. “The shale industry has lost some support among the public. That’s something they should be concerned about.”

Compared to previous survey results, respondents in the new poll were less inclined to believe natural gas drilling is benefiting the communities where it’s occurring.

In response to a question about the ongoing controversy over natural gas royalty payments, more than two-thirds of people (67 percent) said the state should strengthen the law that regulates how gas companies pay people, rather than let the disputes be worked out in court.