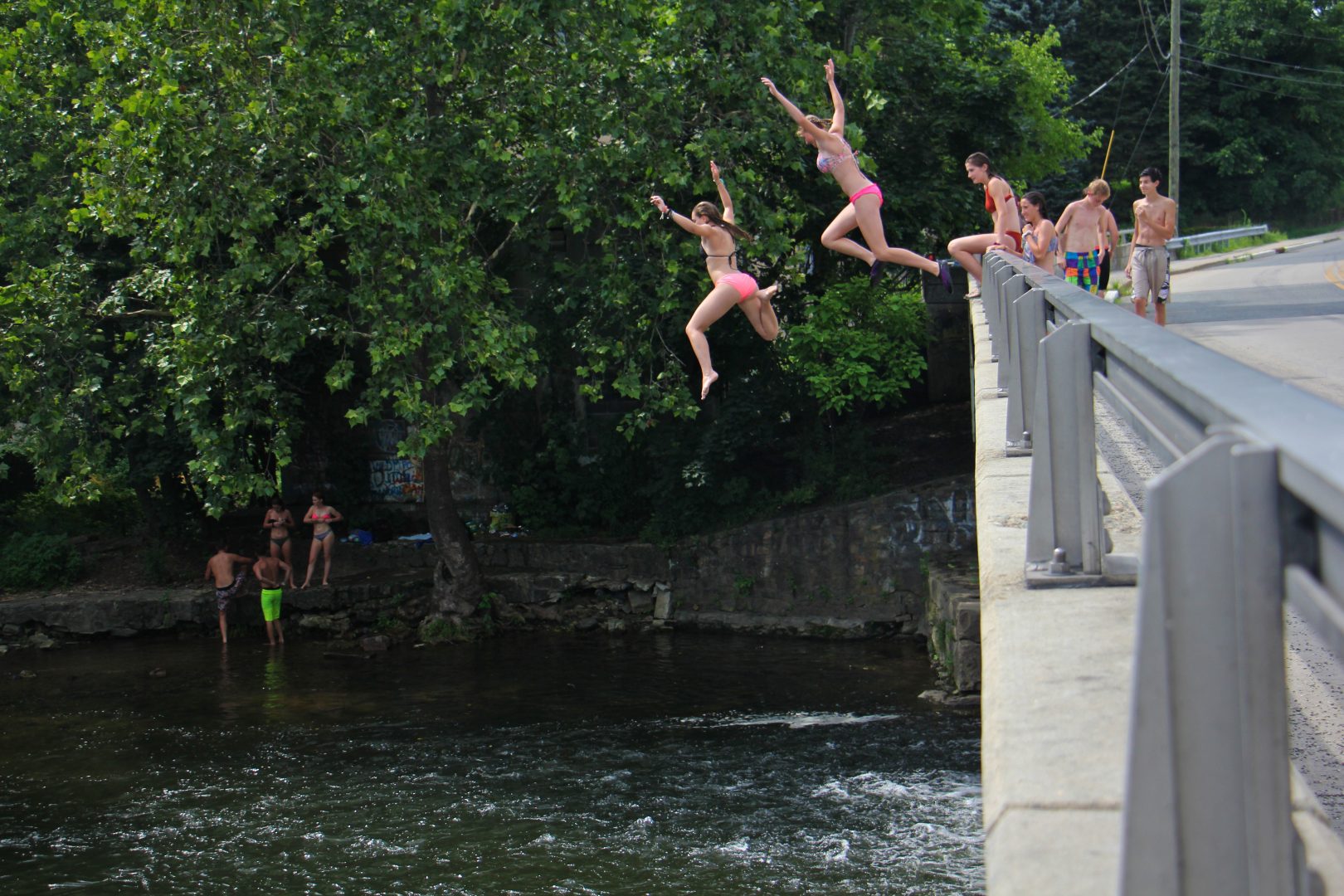 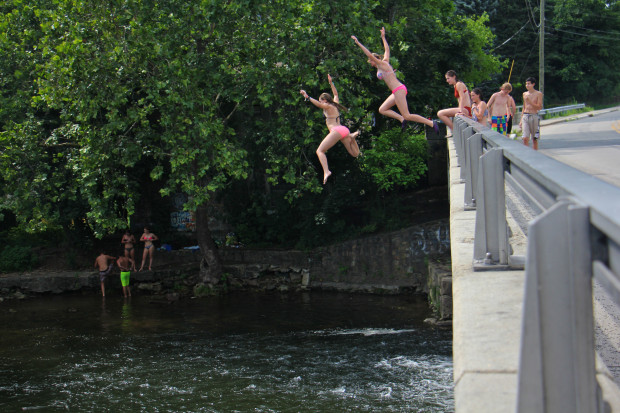 Teenagers take turns jumping into the Musconetcong river just below the Asbury Mill Dam in New Jersey. President Trump signed a spending bill Friday that allocates $5 million for Delaware River Basin restoration. Some of that work would include removing dams like this one. (Emma Lee/WHYY)

The $1.3 trillion spending bill signed by President Donald Trump on Friday unexpectedly brought good news for environmentalists. Instead of the proposed cuts to the Environmental Protection Agency and rollbacks for clean air and water protections, the new federal budget increased funds for a number of environment and energy preservation program, including $5 million for new conservation efforts in the Delaware River watershed.

David Kinney with the conservation group Trout Unlimited says this first-time funding is important for the region.

“It’s a big economic boost,” Kinney said. “We have one of the best wild trout fisheries in the Upper Delaware on the entire East Coast. People travel from all over the world to go and fish for wild brown trout up there.”

Kinney said the funds will help improve stream habitat, removing dams and culverts that impede fish passage, reconnecting watersheds, and restoring eroding banks and vegetation. That will help filter sediments and pollutants, preventing them from draining into the river.

Grant La Rouche, Mid-Atlantic director of conservation partnerships for the National Wildlife Federation, said the $5 million allocation is a huge step in the right direction, and that he would now love to see programs between state and private entities that can help wildlife.

“One of the things I was really excited to see in the last couple of years, was the removal of the Hughesville Dam, which was on the Musconetcong River,” La Rouche said. “Almost immediately after [the removal] they saw the return of shad in the Musconetcong. That is the type of project that we’re hoping to see.”

Kelly Mooij, vice president of government relations for New Jersey Audubon and co-chair of Coalition for the Delaware River Watershed, said one of the most exciting things about the program is that 75 percent of the funds will go to on-the-ground projects for restoration.

“We are thrilled to see it move through today in the Omnibus and be signed by the president,” Mooij said. “Before this there wasn’t any funding for the Delaware River Basin as a whole, there was only money that went through the estuary program and it was about $700,000 — and that only was able to be used in a small portion of the Delaware.”

David Eisenhauer, a spokesperson for the U.S. Fish and Wildlife Service, the agency managing the program, said the funds will be spent on water quality improvements, habitat restoration and protection, flood mitigation, strategic planning to enhance resilience, public access and recreation, and planning, monitoring, and research.

“We don’t have details on when the program will receive the funding,” said Eisenhauer. “But after the law was authorized, we convened our partners in the Basin to start planning for future funding and are ready to get started with the grant program and meet Congress’ request to update them on our progress within 90 days.”

Could some counties scrap the annual vehicle emissions test? A study aims to figure that out