Could some counties scrap the annual vehicle emissions test? A study aims to figure that out | StateImpact Pennsylvania Skip Navigation

Scott Reynolds, owner of Express Transmission in Beaver County, shows an array of gas cap adapters. The adapters are used as a part of Pennsylvania's vehicle emission testing program.

Could some counties scrap the annual vehicle emissions test? A study aims to figure that out 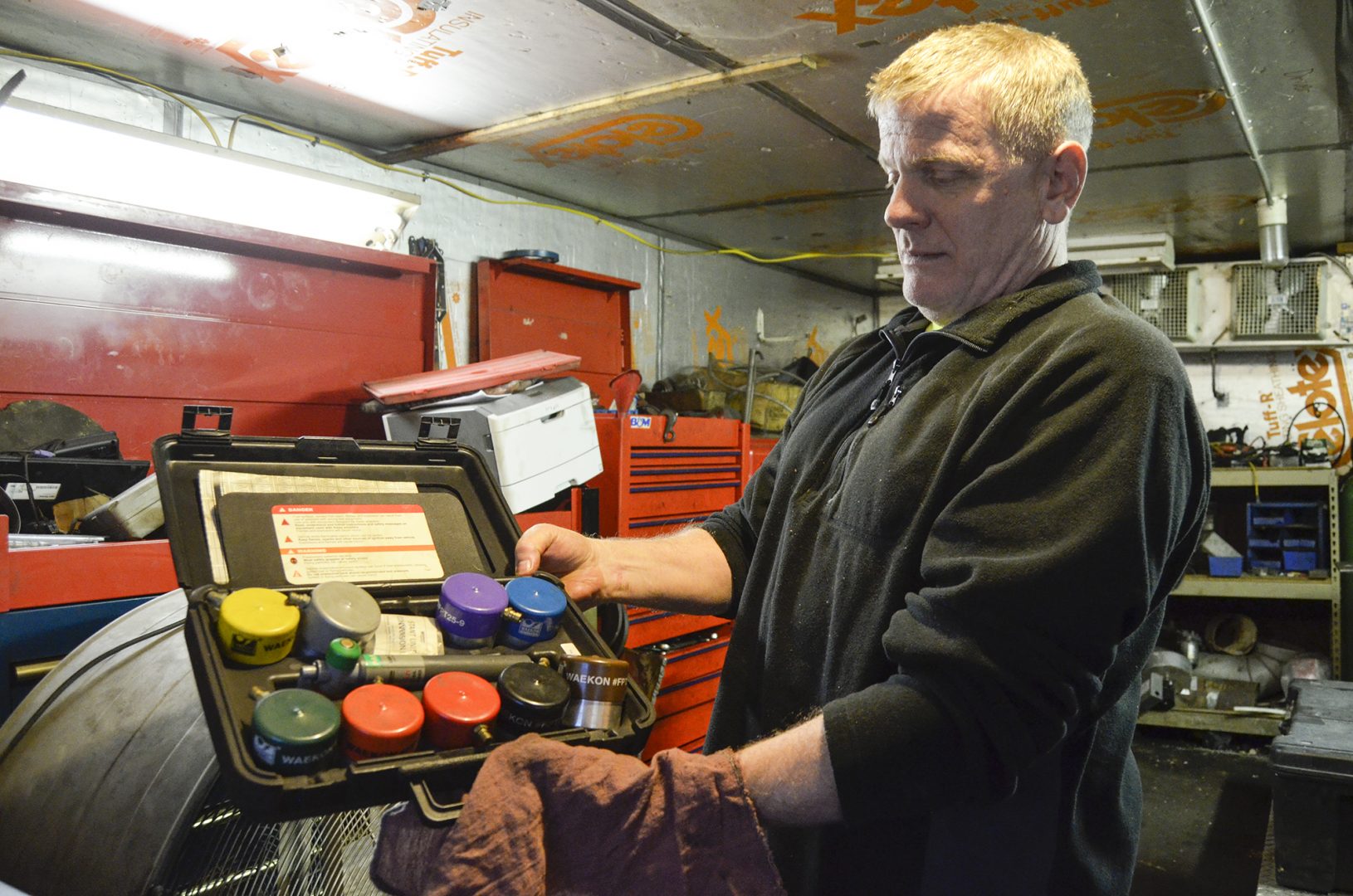 Scott Reynolds, owner of Express Transmission in Beaver County, shows an array of gas cap adapters. The adapters are used as a part of Pennsylvania's vehicle emission testing program. 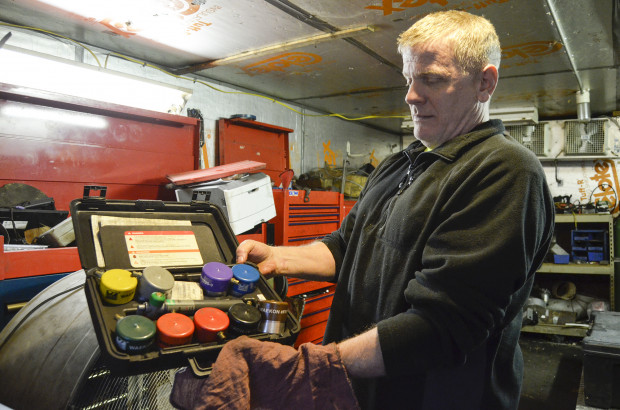 Scott Reynolds, owner of Express Transmission in Beaver County, shows an array of gas cap adapters. The adapters are used as a part of Pennsylvania’s vehicle emission testing program.

Millions of Pennsylvania drivers make an annual trip to their local auto shop to test their vehicle’s emissions. Two decades after this ritual began, some are questioning its necessity.

Emission tests are required in 25 of Pennsylvania’s 67 counties. They exist to reduce smog and serve to help the state comply with the federal Clean Air Act.

State Sen. Elder Vogel, R-New Sewickley, represents three counties, but emissions tests are required in only one, Beaver County. He questions whether that’s fair to those residents, given that dirty air doesn’t stop at the county line.

Emission controls are better on newer cars, he said. Plus, most vehicles pass. Statewide, the failure rate is below 3 percent, according to the Pennsylvania Department of Transportation.

“We are compliant,” he said. “Yet our county and our citizens are still burdened with this oppressive regulation that hits their pocketbooks.”

To carry out the study, the Joint State Government Commission has convened state officials and people who have a background in auto emissions testing and regulations. The group will look at the implications of ending the vehicle emission testing program for some of the state’s less populated counties. Their work is scheduled to wrap up this fall.

Emissions tests vary by a vehicle’s age and location, but they typically involve testing a car’s gas cap to make sure it’s venting properly. Shops also connect to the vehicle’s computer to look for any codes indicating a problem with the emission controls.

There’s still a way for polluting cars to stay on the road. Drivers must attempt to fix a vehicle that has failed, but if they put $150 worth of work into repairing the problem and it still fails, they can receive a one-year waiver.

Is the program working?

Removing counties from the emission testing program requires more than a simple policy change or a new law. The federal Environmental Protection Agency has to sign off.

“If we do end it, we would have to back-fill it with something else to make up the lost emission savings,” said Rob Altenburg, director of the PennFuture Energy Center.

He used to work for the Pennsylvania Department of Environmental Protection, but the environmental group he now represents sued in the early 2000s to make sure the state implemented an adequate program to meet federal requirements.

While ending the program is not the right move, he said, he would be open to discussing changes. Even though most cars pass, he said the tests play an important role. Without them, people have less incentive to fix emissions-related problems on their vehicles.

A spokesperson for the DEP wrote in an email that it’s difficult to determine how effective the program is because the state cannot measure emissions from each vehicle.

“DEP believes the emissions inspection program is important to its mission of protecting clean air of the commonwealth and public health, particularly in urban areas with significant numbers of vehicles,” spokesperson Neil Shader said.

Some groups would like a more solid answer as to whether the program is working.

Ted Leonard, executive director of the Pennsylvania AAA Federation, is part of the group studying the potential elimination of the requirement in certain counties.

“I think the program being two decades old needs to be looked at and see if there are some things we that can fine-tune,” he said.

For some auto shops, the emissions tests are lucrative. The shops keep most of the money and pay a small fee to a vendor. The state does not collect revenue from the program. 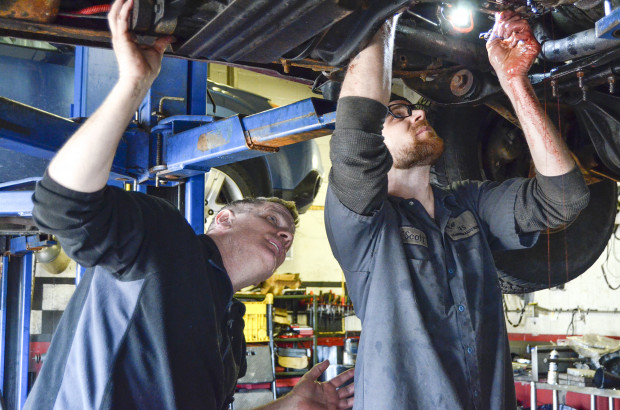 Scott Reynolds owns Express Transmission in Monaca. He said transmission repairs make up the bulk of his Beaver County business, but he does up to 10 emission tests per month on the side. While his shop might not take a big hit if the program were to disappear, he said others down the road run several hundred tests a month.

“I love these guys, they are great friends of mine and this is how they feed their family,” he said.

For their sake, he would like the program to stick around. But for his own business, he said he would be OK if it ended because, like all shop owners, he has to deal with upkeep.

That is particularly troublesome in Philadelphia, where shops run an additional tailpipe test on a small number of older cars, said Ross Colket, president of the Automotive Service Association of Pennsylvania.

He said he would like to see that requirement change.

“Many of the companies that actually made those machines have gone out of business, and in some cases, if there’s a major failure, the owners of the machines cannot get parts,” he said.

But Colket said he opposes what study is proposing to do: end the entire emission testing program in certain counties, as doing so has the potential to further hurt air quality, especially in urban areas.

Soon, the shops like the ones Colket represents will have to get new equipment to keep the tests going. Their technology is outdated, according to PennDOT.

“I just can’t do it with this size of a shop,” he said. “I’m not big enough to incur those costs.”

He might decide to get out of the program anyway, regardless of what the state decides to do.