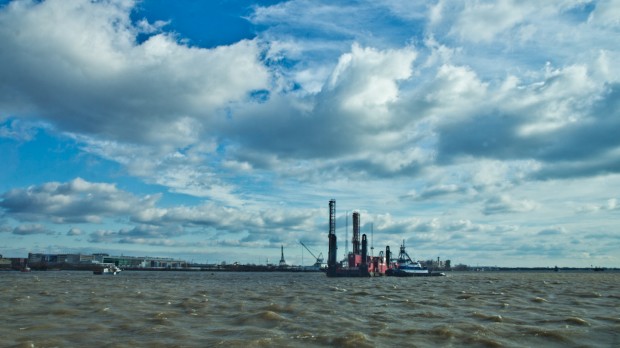 The Delaware River, seen here being dredged near Philadelphia, will get extra environmental protection after the passage of a federal law.

Protection of the Delaware River watershed got a boost this month when President Obama signed the Delaware River Basin Conservation Act. The act will coordinate existing public and private efforts to protect water quality, improve flood control, manage fish stocks, and enhance public access in the region between upstate New York and the Delaware Bay.
Advocates hailed the conclusion of a long legislative battle, and said the new federal protection for the basin will establish a basin-wide strategy for conserving the resources of an area that supplies drinking water to 15 million people and contains national parks, historic sites, and a globally important refuge for migrating shorebirds.
The bill’s passage into law, as part of the larger Water Infrastructure Improvements for the Nation Act, comes six years after an earlier version was first introduced by Sen. Tom Carper of Delaware and former Delaware Congressman Mike Castle, and after several failed attempts to get the bill through Congress.
The new law, signed by the President on Dec. 19, directs the U.S. Fish and Wildlife Service to coordinate existing conservation work by state and federal agencies, universities, and nongovernmental organizations, to create efficiencies and eliminate any duplication of effort.
“There is currently no coordinated strategy for conservation in the river basin,” said Madeline Urbish, director of the Coalition for the Delaware River Watershed, a nonprofit that led advocacy for the new law. “There is a lot of great work taking place but it is happening in distinct geographic regions without a vision for addressing the various challenges from a basin-wide approach.”
The law also sets up a grant and technical assistance program that, if Congress appropriates the funding, would for the first time bring federal money into the region to help implement local projects.
Potential beneficiaries include the Valley Creek Restoration Partnership, a group of state, academic and nonprofit groups that work to address storm water runoff, stream bank erosion and sedimentation in a 23-square mile watershed near Valley Forge. The project has been underway for five years, and needs additional funding to complete restoration work in other stream segments, Urbish said.
The new law is also expected to help restore habitat and trails in the heavily used Wissahickon Valley Park near Philadelphia, in a project that will add protection for the city’s drinking water.
“Having a strategic approach to identifying projects that will have the greatest impact and then helping to implement those projects is key to improving the effectiveness of work in the watershed,” Urbish said.
Advocates for the new law have argued that the Delaware watershed deserves the same federal protection as other nationally important natural areas such as the Chesapeake Bay.
But the local program is non-regulatory, and subject to Congressional appropriation, unlike the Chesapeake program which will receive $70 million in 2017, Urbish said.
Larry Niles, a former biologist for the New Jersey Department of Environmental Protection, and now a consultant on Delaware Bay beach restoration, welcomed the new law as a way of providing national recognition to the watershed.
“It places the Delaware Bay as one of the country’s most important estuaries and if funding becomes available, it will provide support for many worthwhile and productive projects to help communities and wildlife,” he said.
But Jeff Tittel, director of the New Jersey Sierra Club, said the law fails to address the threat of fracking and its associated pipelines, which he said are the most serious threats to the basin.
Although fracking for natural gas in the basin is currently subject to a longstanding moratorium by the Delaware River Basin Commission (DRBC), Tittel said the incoming Trump administration might press to lift the ban, and could persuade Congress not to fund conservation projects under the new law.
“We’re concerned that these projects end up being mitigation for fracking or pipelines,” Tittel said. “This bill is the equivalent to planting wildflowers next to a pipeline.”
Meanwhile, the DRBC said the law will complement its work of regulating water supply and quality in the basin states of Pennsylvania, New York, New Jersey and Delaware.
Clarke Rupert, a spokesman for the DRBC, said the measure will not conflict with the agency’s work.
“The creation of the competitive, matching grant and technical assistance program under this new law will help to implement on-the-ground projects that would complement, not compete with, DRBC programs, and further leverage the limited federal resources available to the basin,” Rupert said.