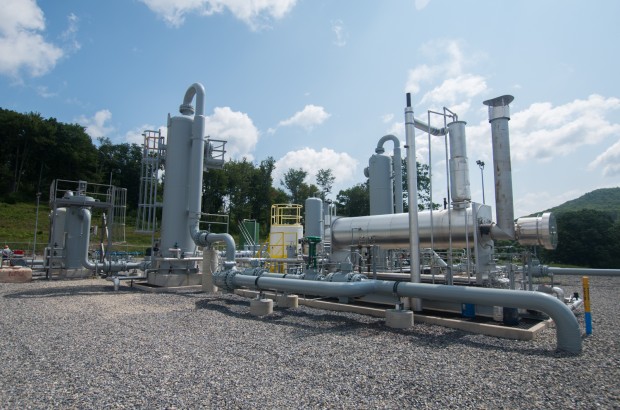 Nearly two years ago, the Wolf administration made national headlines by saying it would limit climate-damaging methane emissions produced by Pennsylvania’s drilling industry. But plans the state unveiled Thursday don’t mean much for curbing pollution in the near future.

Methane is the main component of natural gas. Compared to carbon dioxide, it’s much more potent as a climate-warming greenhouse gas, although it stays in the planet’s atmosphere for a shorter time period.

The Pennsylvania Department of Environmental Protection says that starting in early 2018, drilling companies will have to use the best available technologies to prevent leaks at new well sites and midstream facilities. A separate package of new regulations for existing emission sources was supposed to be proposed over a year ago, but the DEP missed that self-imposed deadline and won’t give a new one.

Because those regulations on existing infrastructure would take years to go into effect, Joe Minott, executive director of the Philadelphia-based Clean Air Council, calls the overall plan to cut methane pollution “painfully slow.”

“The politics in Pennsylvania are not very supportive of regulating the gas industry,” says Minott. “It’s really up to the [Wolf] administration to explain it, but I think they wanted to move extremely cautiously. They couldn’t move any more cautiously than this. But it is moving, and that is good.”

“I heard a lot of talk about the DEP not wanting to do anything on methane until after the budget,” says Vitali. “I think there’s a lot of politics behind these being delayed.The Marcellus industry gives so much money to the legislature.”

For its part, the industry has argued DEP overstepped its bounds– essentially by trying to create new regulatory requirements via permit changes.

The most recent data show overall methane emissions from shale gas industry rising, while other air pollutants are falling. The DEP says the methane increase is mostly due to the growth in the number of facilities filing reports, while the average emissions per facility is staying relatively level.

Yet methane leaks are notoriously difficult to pin down. Without technology to continuously monitor emissions in real time, regulators must rely on self-reporting by the industry and inspections.