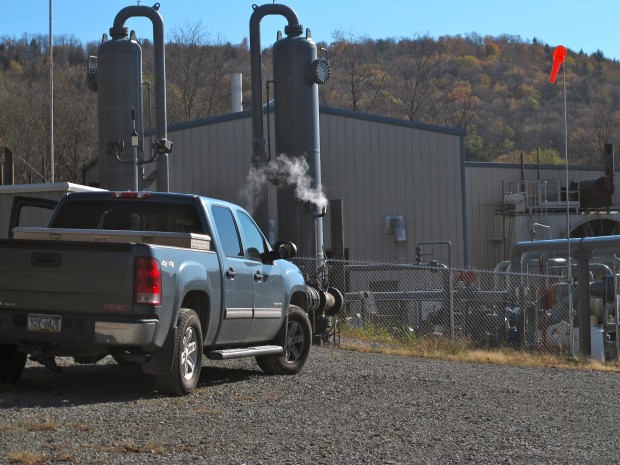 Climate-damaging methane emissions, as well as volatile organic compounds from Pennsylvania’s shale gas industry are on the rise, while other harmful air pollutants have decreased, according to new data released Thursday by the state Department of Environmental Protection.

The methane uptick is largely due to growth in the number of facilities filing reports, the agency says, while the average emission per facility is staying relatively level.

DEP’s latest data is from 2015 and is self-reported by the industry.

“The inventory presents a mixed picture of emissions from the unconventional natural gas industry” said DEP Secretary Patrick McDonnell in a statement. “Certain pollutants are decreasing as best practices are implemented more widely through the industry, while others – including methane, a potent greenhouse gas –  continue to increase, underscoring the need to do more to detect and fix leaks in order to reduce emissions.”

Critics have argued the data does not capture an accurate picture and uses outdated methods. Methane is the main component of natural gas. Although it stays in the atmosphere for a shorter time period than carbon dioxide, it is dozens of times more powerful as a climate-warming greenhouse gas. VOCs come from a variety of sources and can lead to short and long-term adverse health effects.

Pollutants including nitrogen oxides, sulfur dioxide, and particulate matter all decreased between 2014 and 2015.

The DEP released this chart showing changes over time:

“Data like this should encourage policymakers to remain focused on commonsense policies that boost our economy and enable more job creation in the Commonwealth,” says David Spigelmyer, president of the gas trade group, the Marcellus Shale Coalition, who praised the industry for the declines.

Rob Altenburg of the environmental group, PennFuture, filed an open records request in March seeking the data the industry had reported to DEP. He later published a report showing a much larger methane emission spike, of 20 percent. He says it’s unclear why the data now show a much smaller increase.

“I can’t speculate as to whether it seems reasonable or not. It’s industry-reported data,” says Altenburg. “DEP just reports what is reported to them.”

“We are not out there with a meter at every single well site an compressor station 24/7. So, in that sense, we are not collecting this data. But we do quality assurance and quality control.”

Altenburg had requested raw data and, “That’s what he got: raw data,” says Shader. For example, he says, one operator submitted its methane emissions in CO2 equivalent rather than reporting it as methane.

“There were a lot of different things we caught in the review that changed those numbers,” says Shader.