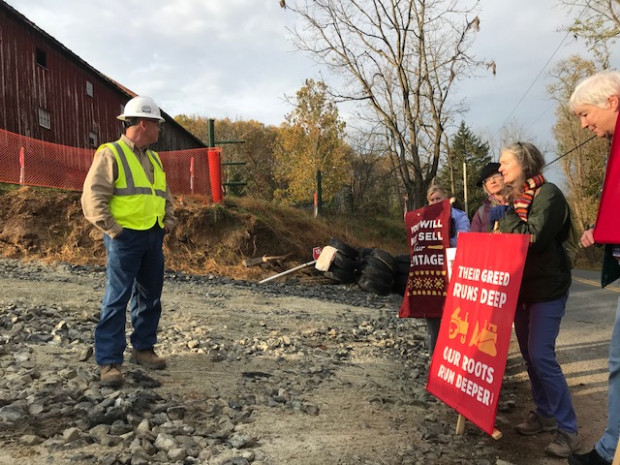 Protesters are continuing to demonstrate against the construction of the Atlantic Sunrise Pipeline in Lancaster County.

The activists latest tactic Friday morning involved setting up a pancake breakfast picnic on an Amish farm in Conestoga adjacent to a construction site and inviting the pipeline workers to share a meal.

About 30 people sang and held signs as they confronted three pipeline workers, who lined up several feet away and watched silently.

“We’d like you all to join us– like human beings,” said Mark Clatterbuck, a leader of the protest group. “Let’s sit down with our shared humanity and talk about what we’re doing and what you’re doing. Do you understand what an incredible desecration this is to us? And what a threat this is to our community?”

State and local police were on the scene, but no arrests were made. Joshua Hall brought his wife and two-year-old son to the demonstration. He says he feels no other choice but to protest.

“All the legal avenues we’ve been shut out of,” Hall said. “So what are we left to do? Some people say, ‘Well, you’re not going to stop it.’ So what are we supposed to do? Roll over?”

The pipeline is part of a broader network of controversial new natural gas infrastructure projects under construction throughout the Northeast to connect natural gas production in the Appalachian Basin to new markets within the U.S. and abroad.

Since mid-October, 29 people have been arrested in Lancaster County for participating in coordinated civil disobedience actions against the Atlantic Sunrise construction.

The group, known as Lancaster Against Pipelines, says they are planning more demonstrations. A spokesman for Williams, the company building the pipeline, says they respect people’s right to protest but are committed to building the project in a safe manner.

The protesters had originally intended chain themselves to a picnic table and offer breakfast that way, but they revised their plans after two officers from the Southern Regional Police department told them the table was an illegal device that would be confiscated.