Al Gore: We’re Getting Close to Bipartisan Action on Climate 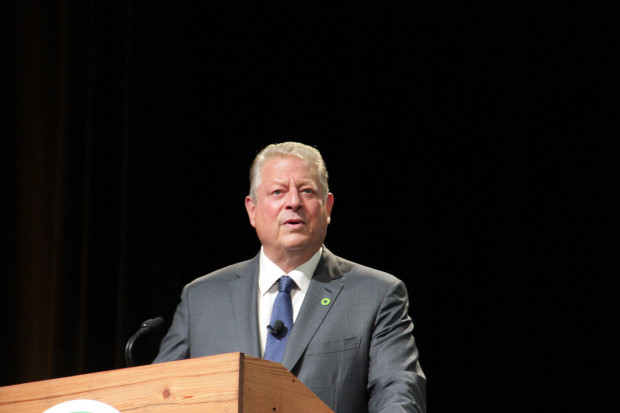 Al Gore says he’s optimistic the U.S. will break its political standoff over climate change, and that the U.S. is “not that far” from a bipartisan consensus on climate change.

One thing that gives him hope? Satellite dishes.

In the midst of a 40-minute interview Gore conducted with reporters in Pittsburgh Wednesday, he told the story of a 1992 bill that lowered costs for satellite dish companies. President George H. W. Bush vetoed the bill. But Congress, while Gore was a Senator from Tennessee, overrode the veto with a more than two-thirds vote in both houses.

Satellite dishes, apparently, were a cause Republicans and Democrats could agree on. Gore thinks the same could be said for solar panels.

“You think about the similarities,” he says. “You have a rooftop system that gives people freedom from a monopoly, an opportunity to make choices in the market place, and pursue lower costs. That’s true of satellite dishes. It’s true of solar panels.”

It is this kind of optimism the former vice president is trying to spread while he’s in Pittsburgh this week. He’s leading the Climate Reality Project, a training for 1300-plus activists from around the world. (This week’s training was sponsored by the Heinz Endowments, which also supports the Allegheny Front.)

Gore started the project a decade ago, after completing his 2006 climate documentary An Inconvenient Truth, as a way to train others in methods of communicating the problem of climate change and its potential solutions.

Along those lines, Gore says there is a ‘building consensus’ for some type of climate legislation in Washington. He pointed to the formation of the Green Tea Party, a coalition of Tea Party activists embracing renewable energy, and the so-called Noah’s Ark Caucus, which includes an equal amount of Republican and Democratic members of Congress committed to taking action on climate change.

He says the forces of climate denial–promoted by groups like those affiliated with the Koch Brothers–was part of the reason why the vast majority of Republicans say they don’t trust climate scientists, who almost universally agree that humans are causing climate change, primarily through carbon dioxide emissions. He said when groups that promote ‘climate skepticism’ incorrectly frame climate change as a ‘debate’ among scientists, it feeds an important tendency: human nature.

“We’re all vulnerable to pushing off until tomorrow something that’s painful to think about today,” he says. “And when this climate denial floods social media and other media with these false doubts that they manufacture, it give some people an opportunity to say ‘Well maybe we should just wait on this. Let’s wait till they settle the science on it.’”

Gore predicts Americans will come to the same conclusions about climate change action as they have on civil rights, gay rights, and widespread acceptance of the theory of evolution.

“I think what all these movements have in common is that ultimately they resolve themselves into a simple binary choice between what’s right and what’s wrong,” he says. “You clear the underbrush away. You give people the reasoning for why change is really necessary, and follow it up with the documented well-supported evidence that we can change it when we need to.”

With respect to President Donald Trump’s actions on climate change, Gore says he is “way less concerned” than he was right after Trump elected to pull the U.S. out of the Paris Climate Agreement.

“I was worried that if he pulled out some other countries would use that as an excuse to pull out themselves,” he says. “But the day after his announcement, I was relieved and happy that the entire rest of the world said ‘No we’re still in the Paris agreement. We don’t care what he says.’”

Gore had gone to Trump Tower in December to try to persuade then President-Elect Trump to honor the deal, in which the U.S. pledged to reduce its greenhouse gas emissions by 26 to 28 percent below its 2005 levels by 2025.

Gore declined to discuss the details of what he said to Trump, who ultimately decided to leave the agreement in August. Gore says he held out hope Trump would remain in the deal right up until the final announcement.

“I still thought even a day before he made the announcement that there was a real possibility that he would stay in the Paris agreement, and I had reason to think that,” he says. Since the decision, he hasn’t spoken with Trump or anyone in Trump’s circle.

“It may be that somebody else can succeed with him where I couldn’t, but I’m not going to waste any more time on it.”

COAL IS PAST, GAS A ‘DEAD END’

He thinks the country needs to better help displaced coal workers, who have been hurt by the decline of the industry.

“We owe them a national commitment to retraining, the creation of new opportunities for good jobs skills upgrades,” he says.

He points out coal mining jobs have been lost to automation for years. “Pretending that we can turn back the clock is not an honest message to these coal miners,” he says. “It’s an effort to deceive them on the part of those who have been principally responsible for destroying their jobs in the first place.”

Gore says he has come to the conclusion that natural gas — though cleaner than coal when burned — was a “dead end” when it comes to limiting climate change. The rise of cheap natural gas from fracking has helped displace coal, and has been a big reason why emissions in the electricity sector in the U.S. have gone down in recent years.

But if natural gas wells and pipelines leak methane — a potent greenhouse gas 84 times as powerful as carbon dioxide over a 20-year period — it can negate any climate benefits from using gas to replace coal.

“I think that the sooner we shift whole hog to renewables the better off will be,” Gore says.