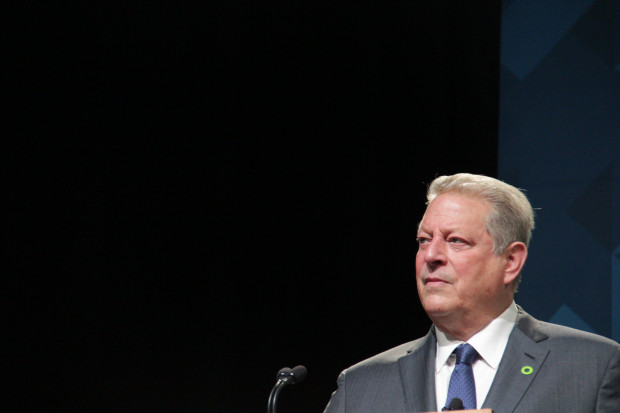 Al Gore stood on a stage at Pittsburgh’s David L. Lawrence Convention Center showing a crowd of 1300 would-be climate activists what is by now his signature visual aide: his slide show.

It showed surreal videos of melting asphalt streets melting during a heat wave in India, devastating floods in West Virginia, Chile, and Louisiana, and out-of-control wildfires all over the world — including Greenland.

But even with the doomsday imagery, Gore didn’t want his audience to let the scale of the problem of climate change get them down.

Gore’s presentation was part of his Climate Reality Project, which the former vice president and Nobel laureate founded 10 years ago. It is a three-day workshop that that has trained 12,000 activists on the science of climate change and ways to communicate to the public global warming’s causes and potential solutions.

Gore walked the crowd through a presentation made famous by his 2006 film, An Inconvenient Truth. He presented the crowd the basic science of climate change. Scientists say human-induced greenhouse gases is the leading cause of global warming. Gore later went on to talk about the declining costs for renewable energy.

Gore told the crowd that Pittsburgh was an example of a city working toward climate solutions. The city has pledged to go carbon neutral by 2030 and to stay in the Paris Climate Agreement. President Donald Trump announced the U.S. was leaving that agreement in August. With cities and states pledging to cut carbon emissions, Gore says the country — despite the president’s proclamation — is making climate progress.

“The U.S. is on track to not only meet but to exceed commitments made in the Paris Agreement notwithstanding what President Trump’s announcement was,” Gore said.

Among the event’s scheduled speakers are Penn State climate scientists Michael Mann and Richard Alley. Organizers said they got 3,000 applications to attend, and about a third of those in attendance were from Pennsylvania. (The workshop was sponsored by the Heinz Endowments, which also funds the Allegheny Front.)

Ghada Makoshi, an activist from Pittsburgh, said she was there to learn how to push local politicians to make concrete changes, like improving public transit. She’d never needed a car while living in Minneapolis and Portland. But when she came to Pittsburgh eight years ago, she found she needed to get a car to get around. She says climate change is one of her biggest concerns.

John Conway had previously taken the workshop, and came to Pittsburgh from Cleveland to serve as a mentor. He said one focus would be to combat misinformation about climate change–like the idea that it’s a hoax, a view expressed by President Trump.

“I think the most difficult part of the climate change movement is there’s so much misinformation out there–the mere fact the idea that it’s still a question that climate change is happening is ridiculous,” said Conway.

Conway said one of the important takeaways would be how to talk about the topic with people who may not be big believers in climate change.

“You don’t change peoples’ minds by pounding them over the head,” he said. “You change their minds by letting them come to a realization by providing them with information and let them make a choice.”