Philadelphia works to bring solar energy costs down to earth 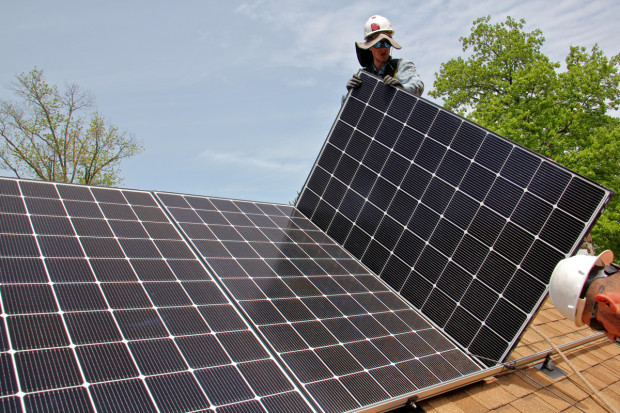 Anthony LoCicero, a 33-year-old structural engineer raised in South Jersey, has been flirting with the idea of installing solar panels on his three-bedroom brick townhouse in South Philadelphia since he bought it, seven years ago.

“Something about it just sounds like the right thing to do in general, right?” LoCicero said.  “But it just never made financial sense.”

Although the price of solar panels has been dropping over the last five years, the cost of installing a solar system capable of producing most of the energy consumed by a Philadelphia row house still ranges between $10,000 to $30,000 — depending on the amount of energy consumed and the size of the house. But a city-wide solar program, with the goal of installing solar panels on 500 city rooftops by 2018, is currently offering below-market rates and other benefits, to entice homeowners.

“It was surprisingly inexpensive, I was pleasantly surprised,” LoCicero said after meeting with one of the three solar installers participating in Solarize Philly, a company called Solar by Kiss.

LoCicero and his fiancee, Christina George, currently use 5,662 kilowatt-hour (Kwh) per year. That’s a little bit below average for a Philadelphia rowhome, according to the installer, which typically would use between 7,000 and 8,000 Kwh. Their house has an electric stove, an electric dishwasher, and air conditioning. But their heating system is gas and their house is properly insulated, so it’s reasonably energy efficient. On average, their monthly electric bill is $70.

“If we do the solar install, theoretically, our electric bill will drop to $1.66 a month,” LoCicero said.

If they finance that cost for 20 years through an equity or home repair line, LoCicero said they would need to make monthly payments of about $100. That’s about $30 more than their current average monthly electric bill.

“Which is not chump change but, at the end of the day, if we go out to lunch one less time a month — it’s not making or breaking our living situation,” LoCicero said. 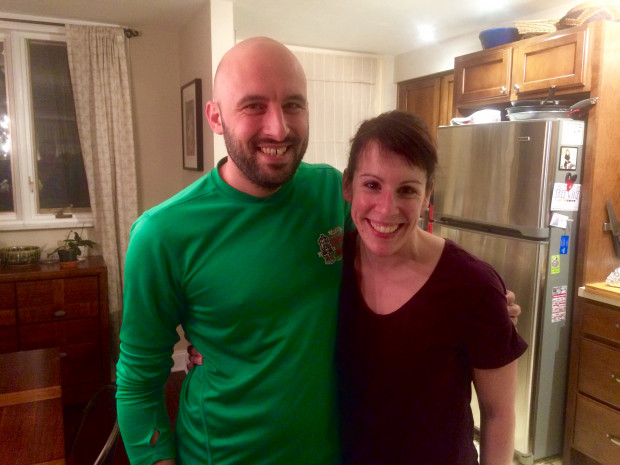 Anthony LoCicero and Christina George are considering installing solar panels on the roof of their house in South Philadelphia through a city-wide solar energy program called Solarize Philly. With their upcoming wedding in October, LoCicero is having a hard time convincing his fiancee that this is the right time.

LoCicero estimates it would take nine years to pay off the solar installation costs, at which point they would begin paying the projected average of $1.66 a month for electricity. Because they would still be Peco customers, they would need to pay an additional meter fee and taxes, which would range between $8 to $10 a month.  Pennsylvania’s net metering program requires Peco to buy back extra electricity solar consumers don’t use at the retail rate, which is what non-solar ratepayers pay for electricity.

Weighing the costs and benefits of solar

LoCicero’s fiancee, Christina George, is not convinced it’s such a good deal. She said LoCicero is not looking at the big picture.

“My whole thing was… this may not be our forever home so does it makes sense to invest in this program if we are deciding that we’re going to move three years down the line?”

LoCicero counters by saying they would recoup their investment because it would raise the value of their house. But George said she’s also still paying her student loans — she’s an interior designer — and that this is not the best timing: they’re getting married on October 7th.

“It’s not on the top of my list of things to take on right now, and another expense — so needless to say I was not happy [with the idea of installing solar],” she said.

“So, I’ve been obviously the proponent of it in the family,” LoCicero said. “And I think I’m slowly turning Christina…. But we’ll see, we’re not sure yet.”

LoCicero and George are among more than 1800 Philadelphia homeowners who have expressed interest in installing solar panels on their rooftops since the city launched Solarize Philly in July. 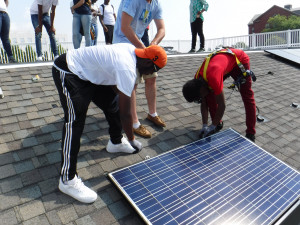 As part of the Solarize Philly program, the city is training Philadelphia public school students for future jobs in the solar industry. Danaje Elliott, on the right, was one of 18 students that completed the training this summer.

Philadelphia’s goal is to install solar energy on 500 houses by the end of 2018, which Philadelphia Energy Authority’s executive director Emily Schapira said would create 75 new green jobs. More than 500 homeowners are already working on a proposal with one of the three installers selected by PEA through an RFP — Solar States, Solar by Kiss, and Moore Energy — and Schapira said they are distributed all across the city.

“A few hot spots are the River Wards, South Philly, parts of West Philly are very active…. Also East Falls, the Northwest and parts of the Northeast,” Schapira said.

PEA also vetted the equipment for this program. For solar panels it selected the SolarWorld 300W Sunmodule Plus, the LG 335W Neon2 and the Jinko Solar 280W Eagle mono-crystalline PERC module, and SolarEdge inverters. Schapira said they offer long guarantees for the equipment and that her office reviews the installers’ proposals to make sure they’re citing the right production values.

And because they are buying in bulk and using economies of scale, PEA has been able to get better pricing across the industry. For example, Solar States charges $3.27 per watt of solar installed but within the Solarize Philly program that price drops down to $3.15.

“So you already save just by being part of Solarize Philly, not to mention the fact that the more people join, the deeper those discounts get,” Schapira said.

PEA negotiated discounts with installers using four tiers, depending on how many people sign up (0 to 15, 16 to 40, 41 to 100, over 100). Every tier comes with a $0.05 discount per watt of solar installed. With 55 contracts signed, the program is at Tier 3, meaning an average household with a 5kW system will save an additional $500.

But given that solar installation prices have been going down, some wonder whether it would be better to wait until the price drops even more.

University of Pennsylvania’s Kleinman Center for Energy Policy solar expert Christina Simeone said waiting could be risky, because there’s a chance prices could actually go up.

“The immediate threat is the trade case,” Simeone said.

That’s a case brought to the International Trade Commission in August by bankrupt American solar manufacturers, including one of Solarize Philly providers SolarWorld. The U.S. manufacturers say they can’t compete with the cheap solar panels imported from China. So they’re begging the federal government to set tariffs to solar imports.

Simeone said the ITC has until September 22nd to decide, but ultimately the decision could go to president Donald Trump, who touts his support for American manufacturers. The Solar Energy Industry Association said “tariffs will double the cost of solar panels and will cause the U.S. to lose 88,000 jobs next year alone” disrupting the solar boom.

“So one could theorize that people would want to lock down the price of cheap solar as soon as possible given that there might be a threat that prices go up,” Simeone said.

Schapira said prices for Solarize Philly are fixed until the end of December 2017. Next year, PEA will launch a low and moderate income program, and although they have intentions of having a second market rate phase, she said “those plans are not finalized.”

“So there is some urgency to really moving forward, if you want to do it,” Schapira said.

Solar State’s Micah Gold-Markel agrees: “This is the moment to jump in,” he said. Gold-Markel argues that installations have seen a huge price reduction in the last eight years. He said they used to install solar for $6 per watt. His current price is $3.27 per watt.

“Is the technology going to get better and cheaper? Probably, but not hugely,” Gold-Markel said. “We’re not going to see some huge price drops. We are going to see some efficiency gain, but it’s not like computers, where they get twice as fast every year — the curve is much slower.”

And because the investment tax credit starts getting reduced in 2020, ending in 2022, Gold-Markel said the possible gains of better efficiency would be offset by the phasing out of those tax credits.

Taking into account the urgency, LoCicero tries one last argument to convince George. He tells her that if they were doing this on their own they would have to figure out how to get the permits needed from the Department of Licenses and Inspections to install the rooftop panels, and from Peco to connect to the electric grid. But if they join the program, PEA cuts through the red tape for them.

“Considering that they’re doing all that for us,” LoCicero said, “that right there is a huge time saver, which to me time is more beneficial than money a lot of times, right?”

George is almost convinced. They start joking about having a “solar wedding.”

“They’ll [the solar contractors] be here that day,” LoCicero said.

“They better not be here,” George responded.

“I’ll be putting my tux on and stepping over electricians on my way out the door,” LoCicero joked back.

Truth is, the panels will be installed within 90 days from the contract signature, according to Solar by Kiss. So no need to deal with contractors on their honeymoon.