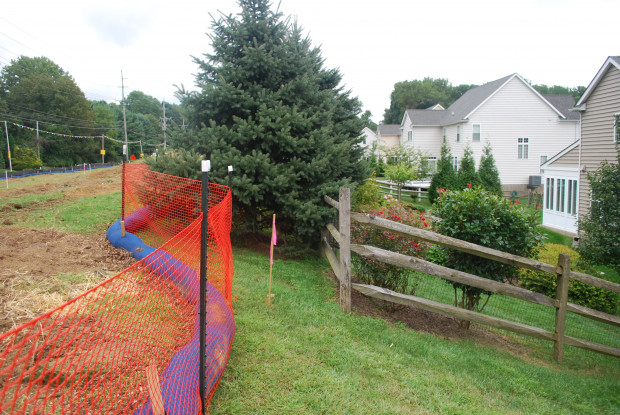 An orange fence separates a Delaware County development from a right-of-way for the Mariner East 2 pipeline.

On a rainy Saturday afternoon in Delaware County, three residents of Thornbury Township stepped over a spray-painted line marking the edge of a right-of-way where a contractor for Sunoco Pipeline was preparing land for construction of the Mariner East 2 pipeline.

The response from one of about eight hard-hatted workers was immediate: he got on his phone and called the police, claiming that the residents were trespassing.

Within a few minutes, two state troopers showed up and began to question the contractors and the residents, some of whom are members of the Andover Homeowners Association, which represents a development of 38 substantial suburban houses a few yards from the pipeline route, and owns the land on which the pipeline will be built.

For the second consecutive day, the residents told the police that they have a right to walk on the land, as instructed by their attorney, because it is owned by their association, and because they are not interfering with the contractors’ work.

“I’m allowed to walk on this property as long as I don’t impede their progress,” said Jennifer Berlinger, in an exchange with State Trooper Carlton Wright. “As much as I would like to chain myself to that 200-year-old tree so that they don’t cut it down because I love it, I’m not doing that.”

Berlinger, owner of a 1798 farmhouse on whose land the development was built, said she was there to record the damage done to the property by the pipeline preparations.

“I’m allowed to do that,” said Berlinger, whose back porch is about 50 feet from the right of way. “I don’t know where they get the idea that we can’t walk on our own property.”

The confrontation between some private landowners and pipeline representatives, fueled by lawyers, police and local officials, can be seen at other places along the 350-mile pipeline route from southwest Pennsylvania to the Sunoco terminal at Marcus Hook. Opponents such as the Andover residents continue to fight the company’s use of eminent domain even though construction has been underway since February, and continue to claim that their safety will be threatened by a pipeline carrying highly volatile liquids a few yards from their homes.

Elsewhere in Pennsylvania, the Gerhart family of Huntingdon County has fought and lost an eminent domain battle with Sunoco, which has cut some trees on the family’s property.

Sunoco insists that the pipeline will be no threat to residents when it is completed in the fourth quarter, and notes that it will meet standards set by state and federal regulators. A Sunoco spokesman did not respond to a request for comment on Saturday’s incident.

The Andover residents say Sunoco has no authority to be working on the land while the association is litigating the project at state and local levels. They reject Sunoco’s assertion that the project can take land though eminent domain because of its public utility status – even though that has been upheld by several courts and the Pennsylvania Public Utility Commission.

And they continue to fight Thornbury Township’s decision to allow the project which residents say violates an ordinance guaranteeing that at least 40 percent of Andover’s land will be preserved as open space. Sunoco is adding about two acres to an existing easement, cutting the proportion of open space to less than the required 40 percent, the residents say.

But Jim Raith, chairman of the township’s board of supervisors, said the township doesn’t have to enforce the ordinance because public utility corporations like Sunoco are exempt from zoning regulations.

“There’s a court order that tells us that a public utility, that Sunoco is considered, is exempt from local ordinances,” Raith said. “That was the order from Chester County and Delaware County courts.”

At the Andover site, the grassy right of way in between the development and Route 352 had been turned into a muddy swathe on Saturday, and was dotted with plastic fences, contractors’ vehicles and the remains of trees that had been cut starting about a week earlier.

By the end of the year, Sunoco is expected to install the pipeline 48 inches underground, according to federal regulations.

Mike Walsh, who owns a house adjacent to the pipeline site, said he’s worried for the safety of his three children after claims by pipeline critics that any leak of pressurized gases could result in an explosion that would hit the entire neighborhood.

Walsh believes that the value of his home – which he bought two years ago for $970,000 – has been significantly reduced by the pipeline project.

Although he hasn’t tried to sell, he said one of his neighbors recently failed to find a buyer despite dropping the price about $200,000 below what Walsh paid for his.

“If we could have moved we would have but our houses are probably worth 50 percent of what they are truly worth without the pipeline being here now,” said Walsh, 33, who works in mortgage sales. “There’s no way that anybody on this side of the street can move. We can’t afford it.”

Houses in the Andover development average about 4,000 square feet, according to Eric Friedman, president of the homeowner’s association.

In their visit to the site, the troopers made no arrests but took names and addresses of the residents who stepped over the easement boundary, and warned that they were at risk of being arrested for trespassing.

“If they are not supposed to be here, then, yes, they should be charged with criminal trespass,” Trooper Wright said, in an exchange with Friedman.

Friedman, standing on a berm that separates his development from the right-of-way, said he wasn’t seeking to disrupt the construction work.

“We have done nothing to impede or interfere in any way with what they are doing,” he told the trooper. “We’re on our property, just documenting the damage. We didn’t speak to them, we didn’t get in their way, we didn’t bother them. I’ve walked my dog right here every day for the last five years that I’ve lived here, so what I’m doing today is no different.”

Friedman later denied that he was seeking to test the contractors but merely using the open space to walk as he has always done, when the contractors challenged his right to be on association property and then called law enforcement. “If anyone was testing anything, I suggest it was them,” he said.

A contractor at the site declined to speak to a reporter.

The association’s attorney, Rich Raiders, said the Andover residents have no right to interfere with any work being done there, and an easement holder such as Sunoco has no right to exclude residents so long as they are not interfering in the work.

The only legal option for state police was to “do nothing” because the residents were not disrupting the work, Raiders said. “There cannot be a criminal trespass against a person with a legal right to be on the property,” he said.