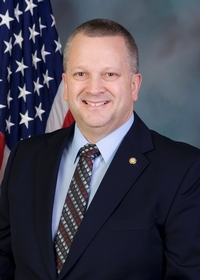 A Republican state lawmaker is accusing Pennsylvania environmental regulators of overstepping their authority, as they attempt to limit climate-damaging methane leaks from shale gas sites.

In a February 10 letter, Rep. Daryl Metcalfe (R- Butler) accuses Acting Department of Environmental Protection Secretary Patrick McDonnell of trying to sidestep a 35-year-old law, known as the Regulatory Review Act. The law allows legislators to have more oversight in the rulemaking process, but DEP is instead seeking to control methane leaks at well sites and compressor stations through permit changes.

“This administration is acting like it’s above the law,” says Metcalfe. “They’re totally regulating. It shouldn’t be coming through a permit. They are operating in a pretty shady area.”

Methane is the main component of natural gas. Compared to carbon dioxide, it is a much more potent greenhouse gas, although it stays in the planet’s atmosphere for a shorter time period.

Metcalfe says at the moment he’s objecting to the DEP’s process, rather than the substance of the proposed changes. However, he calls them burdensome, costly, and job-killing.

In his letter to McDonnell, Metcalfe writes, “I would invite you to share with me and my colleagues at your earliest convenience your plan to rectify this blatant disregard for the law.”

He says he won’t rule out a lawsuit but hopes it doesn’t get to that point.

DEP spokesman, Neil Shader, says the department is complying with the law.

“DEP is at the beginning of this process, not the end, and will continue to work with stakeholders, citizens, industry, and the legislature on these permits,” Shader writes in an email. “The current drafts of these general permits will enable a streamlined permit process for new sources, and the drafts are now out for public comment.”

DEP recently made the proposed permit changes available for a 45 day public comment period, which closes on March 21. The natural gas industry is lobbying against the move. David Spigelmyer, president of the gas trade group, the Marcellus Shale Coalition, criticized it as bureaucratic red-tape. His group also recently sued the DEP over its new drilling regulations.

“Again, the Wolf administration has over-stepped its authority by attempting to jam through new, unnecessary, and costly requirements,” Spigelmyer said in a statement. “We appreciate all who recognize the dangers of backdoor regulatory action.”

Congress axed a rule to protect streams from coal pollution. Here’s what that means for Pennsylvania