DEP issues violation to Sunoco for another spill of drilling fluid 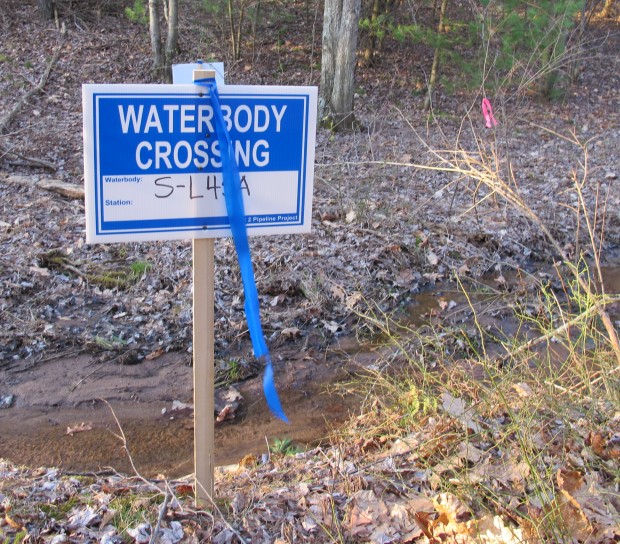 A sign marks a water crossing on land in Huntingdon County where Sunoco wants to build the Mariner East 2 pipeline. DEP issued a Notice of Violation for a drilling mud spill that occurred last week in Dauphin County.

Pennsylvania officials issued a Notice of Violation to Sunoco Pipeline on Wednesday following another spill of drilling fluid, this time into the Susquehanna River at a Mariner East 2 pipeline site in Dauphin County.

The Department of Environmental Protection said the spill was about 50 gallons of bentonite, non-toxic drilling fluid, and was inspected by DEP officials on Aug. 24. It occured in the same place as a much larger spill, of 495 gallons, about a week earlier. The material that spilled in the earlier incident was never recovered, the DEP said.

Failure to fix the first spill “allowed an unauthorized discharge of industrial waste to remain in the Susquehanna River while active drilling continued,” the Notice of Violation said.

The latest spill, in Lower Swatara Township, comes about two weeks after Sunoco agreed to a wide range of new conditions regulating horizontal directional drilling (HDD) during its construction of the pipeline, under a settlement agreement with three environmental groups.

The agreement, approved by a Pennsylvania judge at the Environmental Hearing Board, requires Sunoco to review the geology at drilling sites, to give nearby homeowners more notice of drilling plans, and to offer to test their water before, during and after drilling.

The agreement followed dozens of spills along the cross-state pipeline route during the last few months, prompting Judge Bernard Labuskes to temporarily halt the drilling, which has now restarted. Some homeowners experienced cloudy water in their private wells after aquifers were punctured by the drilling.

It wasn’t immediately clear whether the latest spill violated the settlement agreement.

Neil Shader, a spokesman for the DEP, said the Dauphin County operation was HDD but was not covered by the agreement.

But Alex Bomstein, an attorney for the Clean Air Council, one of the environmental groups that challenged Sunoco at the Environmental Hearing Board, said the agreement covered HDD throughout the 350-mile route.

“The agreement changed the plans by which the pipeline is constructed, and that applies to all locations,” Bomstein said.

Under the agreement, drilling can only resume at a spill site once the spill – officially termed an “inadvertent release” – is contained and recovered, Bomstein said. If there are two or more spills at a HDD location, drilling cannot restart until approved by the DEP, according to the agreement.

“It appears to violate the settlement agreement but beyond that we just don’t have all the facts,” Bomstein said.

Bomstein said the DEP’s action was the first notice of violation for HDD that he had seen since the settlement agreement was approved by the judge on Aug. 9. At that point, there had been 90 drilling mud spills at 42 distinct locations across the state.

The new spill violates the Clean Streams Law and the Dam Safety and Encroachments Act, the DEP said.

Sunoco spokesman Jeff Shields did not respond to requests for comment.

Mariner East 2, costing more than $2.5 billion, has been under construction since February. When complete, it will carry propane, ethane and butane from the Marcellus Shale of southwestern Pennsylvania to an export terminal at Marcus Hook near Philadelphia. Scheduled completion of the project has been pushed back to the fourth quarter from the third quarter.