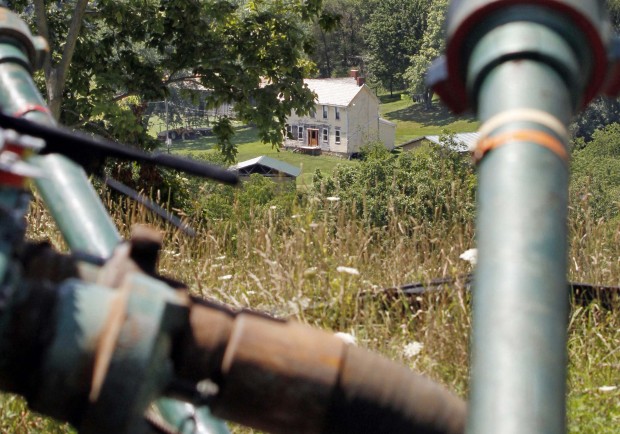 This July 27, 2011 file photo shows a farmhouse in the background framed by pipes connecting pumps where the hydraulic fracturing process in the Marcellus Shale layer to release natural gas was underway at a Range Resources site in Claysville, Pa. After announcing an $8.9 million dollar fine against the driller two years ago, DEP quietly settled the case with no financial penalty.

More than two years after the Pennsylvania Department of Environmental Protection issued a record-breaking $8.9 million fine against driller Range Resources with tough talk about cracking down on faulty drilling operations, the department quietly settled the case this week without issuing any financial penalties.

The fine was issued on May 11, 2015 after the DEP said the company continually failed to fix a gas well that polluted five residential wells, groundwater and a stream with methane in Lycoming County. Range appealed the case to the Environmental Hearing Board.

Range Resources originally drilled the well in the winter of 2011, and fracked it in June of that year. The DEP issued a notice of violation in September 2013, citing a faulty cement job. Despite that notice, state regulators said the company did not fix the well.

“The message is clear, don’t pollute the waters of the commonwealth,” Quigley said in a press release announcing the fine in June 2015. “Build better wells. Refusing to make repairs is simply not an option.”

Quigley was forced out as DEP secretary about a year later. The agency then withdrew the fine about one week after his controversial departure. The move surprised Quigley, who at the time said he knew nothing about the plan to withdraw the fine against Range Resources, something he should have known about as head of the agency.

Quigley, who recently took a senior position at Harrisburg University, would not comment for this story.

Environmentalists decried the decision to not fine Range Resources.

Maya van Rossum with the Delaware Riverkeeper Network, which wants the governor to impose a moratorium on drilling and fracking in the state, says she’s “dumbfounded.”

“This really sends a strong message to the gas industry that they will not be held accountable,” she said.

“This is exactly why the public cannot trust the government to look after their interest,” said Minott. “I think ultimately the governor is responsible for how the executive agencies choose to perform their task and it’s clear that when it comes to the natural gas industry, they seem to be able to run roughshod over the regulatory agencies.”

When pressed for comment, Wolf’s spokesman J.J. Abbott said the governor had nothing to do with rescinding the fine.

A DEP spokesman said the agency “reserves the right to assess penalties in the future.”

Range Resources did not respond to a request for comment.