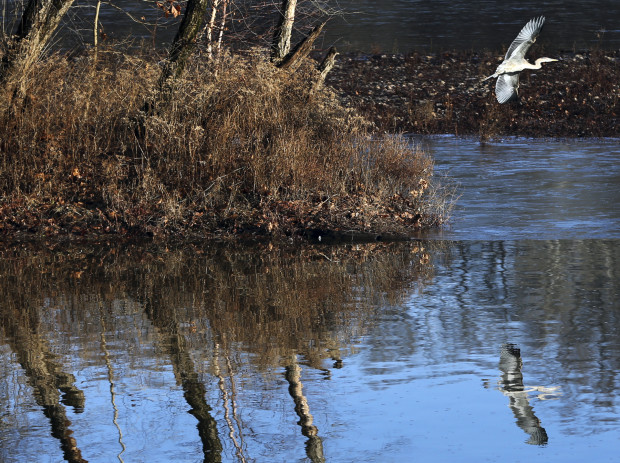 The Delaware River in Washington Crossing, Pa. River flows would be reduced under a new plan by New York City to cut reservoir releases in the Upper Delaware.

New York City is planning to sharply reduce the amount of water it releases into the Upper Delaware River this fall in an effort to revive multi-state talks on how to manage the river’s water resources to meet a range of demands including drinking-water supply, fishing, tourism, and environmental protection.

The city’s Department of Environmental Protection said on Wednesday it will cut releases from three reservoirs starting in September, ending a policy that sustained higher flows during the summer months when it sought to protect fish stocks and help the region’s economically important tourist industry.

The city maintained the higher flows voluntarily starting in June despite the failure of the four basin states – Pennsylvania, Delaware, New Jersey and New York, plus New York City — to reach unanimous agreement on a flow-management program.

Without agreement on the Flexible Flow Management Program (FFMP), management of the river is required under a U.S. Supreme Court ruling from the 1950s to revert to another program that would have cut most releases from the three reservoirs by more than half during the summer months.

Now that the summer season is drawing to a close, New York City officials have decided to cut releases to the minimum required, and will do so in two stages.

Starting on Sept. 5, the biggest cut would be made at Canonsville Reservoir where the volume of released water will drop to 178 million gallons a day (mgd) or slightly more than half of the current rate of 323 mgd. On October 10, the release rate from that reservoir will be cut again, this time to 24 mgd, or less than 10 percent of the current level. And between Nov. 1 and March 31, the planned rate will drop again to 17 mgd, the NYC DEP said.

Releases from the two other reservoirs will be cut from the current 97 mgd to 26 mgd and 13 mgd, respectively by the end of the year, according to the plan.

“The voluntary release of additional cold water into the Delaware River over the past 12 weeks marked a deliberate effort by New York City to prevent undue harm to the world-class trout fishery and businesses in New York and Pennsylvania during a time when thousands of visitors are arriving to enjoy the region’s natural resources,” said Paul Rush, Deputy Commissioner of the NYC DEP.

“As we move past the near-term challenges of the peak of summer, the City believes it is appropriate to return its operations to the model of unanimous consent that has guided flows in the Delaware River for decades,” Rush said in a statement.

Adam Bosch, a spokesman for the department, said the reduced releases are intended to motivate the states to come back to the table and revive the FFMP which expired on May 31.

The releases may help all the parties have “an adequate sense of urgency to work toward the next unanimous agreement,” Bosch said.

But he said officials hope the four states will reach agreement before the plan is implemented. “The hope is we don’t get there,” he said.

He said there would be a “significant” reduction in river flow because of the smaller releases but argued that the first reduction will be made after Labor Day in an effort to minimize disruption to the tourism industry, and the second would be made before late October/November period when many fish spawn.

David Kinney, mid-Atlantic policy director for the fisheries group Trout Unlimited, said the sharply reduced flows could result in pools of shallow water in some sections of the Upper Delaware, and the width of the main stream could be reduced by half in some places under the department’s plans.

The much lower water levels could damage fish stocks which account for an industry worth more than $400 million a year, Kinney said.

He accused the NYC DEP of “brinksmanship” but said the plan might succeed in bringing the parties back to the negotiating table. “We are hopeful that going to the brink will bring some clarity to the situation,” he said.

In Pennsylvania, officials from the Department of Environmental Protection indicated they would try to reach agreement on a new management plan.

“DEP is concerned about the effect reduced releases will have on the communities, recreational opportunities, and aquatic life downstream and is committed to working with all Delaware River partner states to find a satisfactory solution,” said spokesman Neil Shader.

In Philadelphia, which takes about 60 percent of its drinking water from the Delaware River, the termination of the FFMP is unlikely to have an adverse effect on water supplies, according to an analysis by the Philadelphia Water Department, said Joanne Dahme, a spokeswoman for PWD.

In New Jersey, the state “remains committed” to working with the other states to agree a new FFMP, said Larry Hajna, a spokesman for that state’s Department of Environmental Protection.

The Delaware River Basin Commission, an interstate regulator that manages water supply in the region on behalf of the basin states and the federal government, said it hopes for an agreement on the FFMP.

“DRBC staff stand ready to support the decree parties as needed and encourage continued negotiations for an adaptive program that will address the multiple objectives of water resource management,” said the agency’s spokesman, Clarke Rupert.