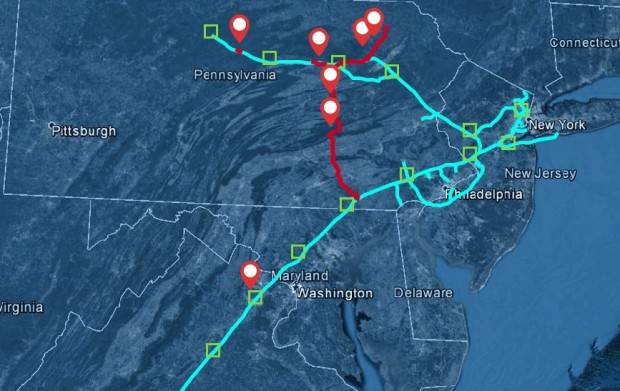 A federal judge has granted the builder of the Atlantic Sunrise Pipeline immediate possession of five holdout properties resisting the project, including land owned by a group of Catholic nuns in Lancaster County.

Earlier this summer The Adorers of the Blood of Christ attracted global media coverage when they erected a chapel in the path of the pipeline’s right of way. The nuns are currently suing the federal agency that approved the project, alleging it violates their religious freedom.

A spokeswoman says the group does not have much to say, beyond what it posted Wednesday on Facebook.

“We are disappointed that the federal judge today made the decision to condemn the rights of way and grant immediate possession of our (and others’) property in Lancaster County,” the Adorers wrote. “We will be evaluating our next steps.”

The Atlantic Sunrise pipeline is an interstate transmission line designed to link natural gas from northeastern Pennsylvania to markets along the eastern seaboard.The project is one of nearly a dozen major pipelines planned to ship Marcellus Shale resources domestically and abroad.

Opposition to the project has been intense since it was first announced in 2014. Although the pipeline will cross 10 Pennsylvania counties, the most vocal pushback has come from Lancaster County. Chris Stockton, a spokesman for Atlantic Sunrise builder Williams, says the judge’s decision means the company can now “begin timely construction of this important energy infrastructure project, pending receipt of the last remaining state and federal clearances expected in the coming weeks.”

“The easement only gives us the limited right to install and operate the pipeline,” Stockton says. “Use of the land, with certain limitations, can remain the same as before construction.”

After federal regulators approved the pipeline in February, people created a protest encampment along its route, in Conestoga. Williams recently paid $2.8 million for the 107 acre farm where the camp was being hosted– around a million dollars more than a similar farm would sell for, according to LNP.