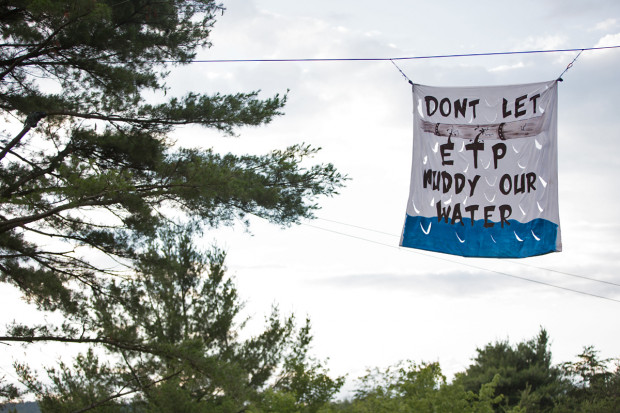 A protest sign at Camp White Pine near construction of the Mariner East 2 pipeline in Huntingdon County, Pennsylvania. Energy Transfer Partners (ETP) is building the ME2. On Tuesday it filed a lawsuit against protestors of its Dakota Access line in North Dakota.

The pipeline builder behind construction of the Mariner East 2 pipeline has sued activists who protested the company’s Dakota Access line in North Dakota last year. Energy Transfer Partners, which recently merged with Sunoco Logistics, filed a federal racketeering lawsuit in North Dakota on Tuesday. The complaint alleges environmental groups, including Greenpeace, as well as some individuals, were engaged in criminal activity to prevent pipeline construction and line the pockets of environmental groups through increased donations.

While the Mariner East 2 is currently under construction, ETP was successful in completing the Dakota Access line and it went into production this year.

The suit refers to the North Dakota protestors as “rogue eco-terrorist groups who employ patterns of criminal activity and campaigns of misinformation to target legitimate companies and industries with fabricated environmental claims and other purported misconduct, inflicting billions of dollars in damage.”

“This is the second consecutive year Donald Trump’s go-to attorneys at the Kasowitz law firm have filed a meritless lawsuit against Greenpeace,” Wetterer said in a statement. “They are apparently trying to market themselves as corporate mercenaries willing to abuse the legal system to silence legitimate advocacy work….This has now become a pattern of harassment by corporate bullies, with Trump’s attorneys leading the way.”

A spokeswoman for Energy Transfer Partners and Sunoco said the case has no connection to the Mariner East 2 project, which has faced increasing opposition in suburban Philadelphia.

“There is no correlation here,” said ETP spokeswoman Vicki Granado in an email. “We respect everyone’s right to peacefully and lawfully protest.”Granada said the protests against the Dakota Access line last year “caused enormous harm to our company.”

“We have an obligation to our shareholders, partners, stakeholders and all those negatively impacted by the violence and destruction intentionally incited by the defendants to draw a line,” she said.

Mariner East 2 has not garnered the same degree of opposition and national attention as the Dakota Access line. But Sunoco/Energy Transfer Partners has faced land owners and a handful of their supporters in Huntingdon County who are tree-sitting to prevent construction. The company obtained a court order to have the local sheriff and state police force the Gerhart family from their land where the company has an easement, but so far law enforcement has not entered into the fray and a stand-off remains.

Elise Gerhart, who with her parents is fighting Sunoco/ETP’s eminent domain taking of their land in court, said the financial losses suffered by the company over the Dakota Access pipeline are of their own making.

“The bad press about the company was generated because of their own offensive actions,” she said.

The Gerhart’s eminent domain attorney Rich Raiders, says ETP is engaging in misinformation campaigns regarding the Mariner East 2 pipeline. The company hired The Bravo Group, which sent postcards to residents of Chester and Delaware counties last month defending itself against critics.

“The company harmed its own reputation on Dakota Access, as well as on Mariner East, by not managing its public relations and project management in a way that maximizes community relations and minimizes corporate intimidation,” said Raiders in an email. “If ETP wishes to re-litigate how it did not engage the community in its construction of Dakota Access, just like they did not engage the community in its routing of Mariner East II, it should do so in its own board room, not the courts.”

Drilling mud spills along the line led to a judge shutting down parts of the project, and a recent settlement forced the company to agree to increased environmental protection measures. Landowners in West Whiteland Township lost their well water due to construction of the line and are now hooking up to a public water supply.

Dozens of landowners have filed lawsuits against eminent domain takings. The Clean Air Council has challenged the Department of Environmental Protections permits to build the pipeline.

The Council’s executive director and chief counsel Joe Minott says his organization has also faced these types of legal actions. He says although they are intended to scare would-be opponents from challenging a company’s plans, they rarely succeed.

“The money Energy Transfer is wasting on expensive lawyers would be much better spent on ensuring that the company better protects public health and fragile ecosystems,” said Minott. “While this is not surprising that Energy Transfer would resort to this kind of bullying tactic, the public and environmental activists will not be intimidated and will not back down.”

David Messing, a Pennsylvania civil rights attorney with Kairys, Rudovsky, Messing and Feinberg, said these types of lawsuits are difficult and expensive to defend.

“And often activists end up resolving the lawsuits with some kind of settlement agreement that may in fact limit their ability to protest what the corporations have been doing,” he said.