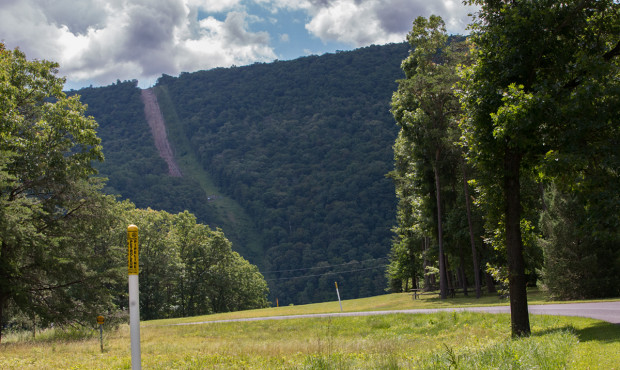 The path to be taken by the Mariner East 2 pipeline in Huntingdon County. A state lawmaker says pipeline supporters may have used hacked email addresses in an attempt to show public support for the pipeline.

Hundreds of emails in support of the Mariner East 2 pipeline have been sent to the office of a state lawmaker in the names of individual residents, some of whom deny sending them.

State Rep. Leanne Krueger-Braneky, a Delaware County Democrat who has been an outspoken critic of the Sunoco Pipeline project, said Monday she has in the last three and a half weeks received about 400 copies of the same email which urges her to support the pipeline and to avoid any delays in its current construction.

By Monday afternoon, seven of the purported senders of the emails had told Krueger-Braneky’s staff that they have no knowledge of the messages that were sent in their names, and that they suspect their addresses were hacked.

In attempting to reply to the emails starting last Friday, Krueger-Braneky’s staff first found that 20 bounced back because the addresses were bad, and then found some of the recipients said they had never sent the emails in the first place.

“More alarming, we heard from seven constituents right away who told us that they never sent the original email. Many of the people who wrote back to us do not support the pipeline and are upset that their email address was used,” she said.

She said some of the emails were received in the middle of the night, and at precise 10-minute intervals, suggesting that they were sent automatically rather than by individuals. The 400 emails were the most she has received on a single topic since taking office two years ago, she said.

The original email is available under the “take action” section of the web site of the Pennsylvania Energy Infrastructure Alliance, a pro-pipeline organization that includes trade groups, chambers of commerce and economic development agencies. One of its members, the Delaware County Chamber of Commerce, did not return a phone call seeking comment.

Sunoco spokesman Jeff Shields said the company is not a member of the alliance but shares its goals of expanding energy infrastructure.

Krueger-Braneky said she had reported the incidents to the state Attorney General’s office. Joe Grace, a spokesman for Attorney General Josh Shapiro, said: “Representative Krueger-Braneky has been in touch with our office and we’re aware of this matter. We take the protection of people’s online personal information and privacy seriously.”

Sunoco’s Shields said the emails were not sent by Sunoco or by Bravo Group, the company’s Harrisburg-based public relations firm.

Critics of Mariner East 2 have accused Sunoco of using controversial tactics in an effort to build public support for the pipeline. Among them was a campaign to “neutralize opposition” to the project, as stated by Bravo Group, which has now taken the language off its web site.

Asked whether it had anything to do with the emails, Bravo itself issued a statement saying: “Bravo Group seeks to build trust between clients and the public by sharing facts. That is how we approach every project. The tactics you describe are not how we operate.”

Earlier this month, a pipeline opponent named Dallas Goldtooth posted Facebook videos showing a pipeline supporter identifying himself by two different names as he defended both the Mariner East 2 in Pennsylvania and a Louisiana pipeline that is being built by Sunoco’s parent, Energy Transfer Partners.

Sunoco’s Shields said the company had no connection with the pipeline supporter in the videos.

“We are not familiar with the person referenced in the video, and we are not affiliated with him in any way,” Shields said. “We respect everyone’s right to lawfully protest and will continue to do so.”

The emails, with the subject line “Don’t delay important PA infrastructure,” argue for the importance of the cross-state natural gas liquids pipeline to the state’s economy, and say that the project has revitalized the Marcus Hook Industrial Complex where the products will be stored and exported.

After several tumultuous weeks in which drilling fluids have been spilled in dozens of places, private water wells contaminated, and drilling temporarily halted by a judge, the emails also acknowledge that there is “nothing pretty” about large construction projects like Mariner East 2. But they argue that the horizontal directional drilling that has caused the recent incidents is less environmentally damaging than the alternative of open-trench construction.

“This project is a critical infrastructure project and should be allowed to continue within the regulatory guidelines without an unnecessary halt to the progression of construction,” say the emails.

The judge lifted the drilling ban but imposed a series of conditions on Sunoco in a settlement agreement between the company and three environmental groups that sought to extend the halt to drilling. The conditions include reassessing the geology at drilling sites, obtaining new clearances from the Department of Environmental Protection, and giving more notice to nearby home owners before drilling starts.

Following the settlement agreement, Krueger-Braneky replied to the 400 emails, saying she recognized the economic potential of the pipeline but stressed that it needs to be safe.

“Economic development in Delaware County and all of Southeastern PA is very important to me, as is the future sustainability of energy projects,” she said. “We must make sure that any construction project, including pipeline projects, are carried through safely and with consideration for the people and property affected by the project.”

The more than $2.5 billion pipeline will carry propane, butane and ethane from the Marcellus Shale of southwest Pennsylvania to Marcus Hook. Construction began in February, and is scheduled for completion in the fourth quarter, later than the third quarter previously anticipated by the company.