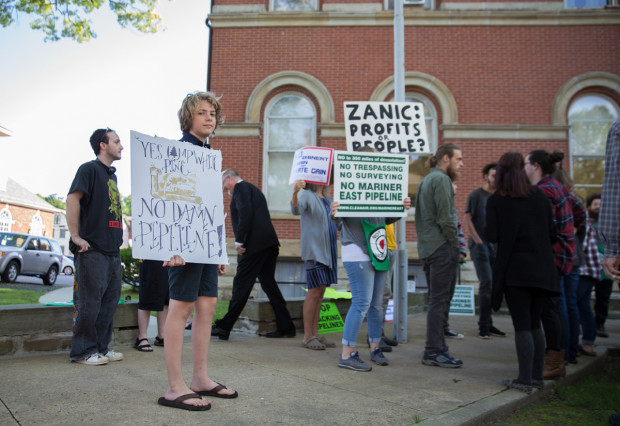 Max Brenneman, 14, protests outside of the Huntingdon County Courthouse in support of the Gerhart family who oppose Sunoco's construction of the Mariner East 2 pipeline on their property. “I have to do something,” says Brenneman. Sunoco has hired a new public relations firm to "neutralize opposition."

A public relations firm for Sunoco Pipeline says it wants to “neutralize opposition” to the controversial Mariner East 2 pipeline project.

Bravo Group, which has worked with different parts of Sunoco for at least five years, makes the statement on its website, in describing its role in working on the cross-state Mariner East 2 pipeline, which is scheduled for completion in the third quarter of this year.

“We’re helping Sunoco build public and policyholder support for its Mariner East projects, an infrastructure investment of more than $3 billion,” the statement says. “The goal: secure regulatory approvals, neutralize opposition, and develop the Mariner East projects on budget and without capital losses.”

In its efforts to plan and build the natural gas liquids pipelines, Sunoco has encountered opposition from some landowners who have refused its offers of compensation for building the pipeline on their land, and are fighting its use of eminent domain in the courts. It is also under pressure from some communities at the densely populated eastern end of the line who say the planned natural gas liquids pipeline is a grave risk to public safety.

One opposition group, Delaware County’s Middletown Coalition for Community Safety, said the Bravo statement fuels its belief that it is being watched by parties working with Sunoco. The coalition said it is focused on public safety and property rights, and that Sunoco and its surrogates appear to be fighting it on those issues.

“Bravo Group’s aggressive rhetoric implies that standing for those values makes MCCS a target that needs to be ‘neutralized,’” the coalition said in a statement.

Jeff Jubelirer, vice president of Bellevue Communications Group, a Philadelphia-based PR firm, said the Bravo language could be a “turnoff” for people who are undecided on whether to support the pipeline, and it would be seen by opponents as evidence that Sunoco and its agents are trying to stifle dissent.

But he said the statement was no surprise coming from a firm that has its roots in political campaigning. “That’s who they are,” he said.

The Bravo Group lists a number of energy companies as clients, including the pipeline builders Williams and Energy Transfer Partners, as well as gas drillers Cabot Oil and Gas, and Southwestern Energy. Energy Transfer Partners recently acquired Sunoco, which is now a subsidiary of the company known primarily for building the controversial Dakota Access pipeline.

In an effort to calm public concerns about the pipeline route in Chester and Delaware Counties, Sunoco mailed postcards to residents last week, defending its position on six issues raised by opponents of the natural gas liquids line.

The postcards, headlined “Mariner East: Separating Fact from Fiction,” say the Philadelphia region has lived for generations with pipelines carrying natural gas and natural gas liquids such as propane. The cards say the project is “strictly” regulated by state and federal agencies; that it employs skilled local workers who use high safety standards, and that it uses advanced construction methods such as horizontal drilling to minimize environmental impacts.

The cards say that Mariner East 2 will use some 75,000 tons of domestic steel, and that Sunoco has its own rigorous inspection program. The company also cites an independent study by Chester County’s West Goshen Township which concluded that Sunoco’s pipeline operations meet or exceed federal safety standards.

The Bravo Group has also produced a video, posted on its website making similar points.

In a rebuttal to the new campaign, the Middletown Coalition for Community Safety said the postcards contained “misinformation” on all points. It attacked the company’s assertion that Mariner East is strictly regulated by state and federal agencies, saying that no branch of government has authority over where pipelines may be built.

It challenged Sunoco’s statement that it uses experienced local labor who work to high safety standards, saying that the company received a federal notice of probable violation in 2016 for using unqualified welders.

The coalition also rejected the company’s assertion that it uses advanced construction techniques such as horizontal directional drilling to minimize environmental impacts. It cites a leak of drilling fluid into Chester Creek at Brookhaven in May this year, prompting a notice of violation from the Department of Environmental Protection. It also said the company leaked two million gallons of drilling fluid into an Ohio wetland in May this year, prompting actions by state and federal regulators.

And it attacked Sunoco’s reference to the West Goshen study, saying that the consultant ignored public safety risks even as it said the pipeline project met or exceeded federal safety standards.

Sunoco spokesman Jeff Shields said the mailers were “factual,” and had been sent to residents as part of an ongoing effort to share information with the public.

“We will continue to address residents’ questions and to address any distortions in the public discourse as we build the Mariner East 2 pipeline project,” Shields said. He declined to say whether the Bravo group was involved in the mailings.

Jeanette Krebs of the Harrisburg-based Bravo Group issued a statement saying: “Bravo Group works with our clients to reach local communities and ensure that the facts of a project or issue are heard.”

Shields confirmed that the company has worked with the Bravo Group for more than five years, but declined to comment on the “neutralize” language.

Elise Gerhart, whose family is fighting Sunoco’s plans to build on its land in Huntingdon County, said she was not surprised by Bravo’s plans to “neutralize opposition” to the pipeline project. Gerhart said efforts to control public information on the project have also included fake Facebook posts in which she is purported to have said that helicopter flyovers of her family’s property were a Russian invasion.

“I know who is flying helicopters over us, and I would have never said it was the Russians,” Gerhart said. “They fabricated Facebook posts, trying to make it seem like I am mentally unstable, and that I am some kind of conspiracy theorist. It’s ludicrous. I would never say that.”

On Thursday morning, the Gerharts and about a dozen supporters were waiting to see if they would be detained following a county court injunction last week allowing the family to be arrested on their own land if they stand in the way of Sunoco construction crews. Some of the supporters were sitting in trees that are due to be felled to make way for the pipeline, Gerhart said.

The ‘neutralize’ statement follows a report that TigerSwan, a private security firm that represented Sunoco parent Energy Transfer Partners in last winter’s fight against the Dakota Access Pipeline, has moved to Pennsylvania to defend the Mariner project.