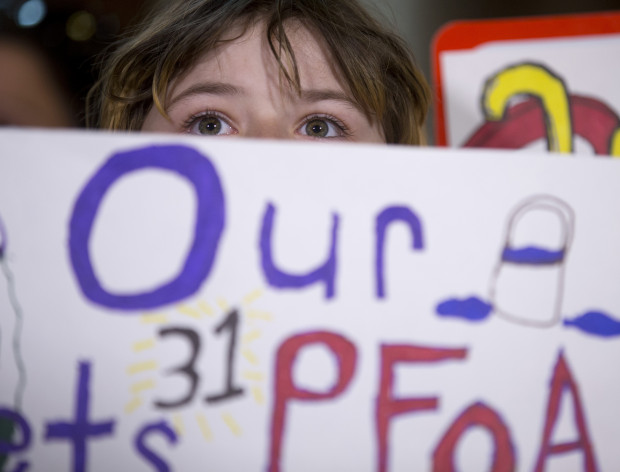 In this June 15, 2016 file photo, a girl holds a sign during a news conference at the state Capitol in Albany, N.Y., calling for hearings on the state's handling of PFOA contamination in drinking water in Hoosick Falls, N.Y. Pennsylvania regulators decided to review whether the state's rules on PFOA levels in drinking water should exceed federal guidelines.

Pennsylvania’s Environmental Quality Board accepted a request to look at whether to set a health limit for the toxic chemical PFOA in drinking water, the board’s first such decision in its more than 40-year history.

The board voted unanimously on Tuesday to accept a petition by the environmental group Delaware Riverkeeper Network which asked it to set a maximum contaminant limit (MCL) for PFOA which has been linked to cancer, high cholesterol and developmental problems.

Although it’s uncertain whether the decision will lead to a formal investigation into the chemical, the Riverkeeper welcomed the vote as a historic step toward the first-ever MCL for a state that has so far adopted federal drinking water standards.

And a senior DEP official said even the acceptance of the petition for a MCL is a first for the board, an independent body that adopts DEP regulations.

“It is a big deal,” said Jessica Shirley, the DEP’s policy director. “They should be really excited to have the EQB accept their petition,” she said, referring to DRN.

But she said that acceptance of the petition does not necessarily mean that the department will be promulgating a rulemaking.

Before any decision to investigate whether to set a MCL for PFOA, officials must first decide why there are widely differing health limits for the chemical recommended by the U.S. Environmental Protection Agency, the State of New Jersey, and Delaware Riverkeeper, which is advocating for the strictest limit for the chemical. That process is likely to take about a year, Shirley said.

Any decision to develop a MCL for PFOA would take “years” and “millions and millions of dollars,” she said. If adopted, the limit would require water suppliers to monitor for the chemical and treat any water that exceeded the limit

Shirley said the board voted to accept the petition because it met all the requirements, was something that EQB could act on, and didn’t conflict with federal law.

Health concerns about the chemical have been raised in Bucks and Montgomery counties. They’ve  also been raised in New Jersey, where officials are considering a  contaminant limit recommended by a state science panel, and in West Virginia, where residents near a plant that used the chemical have experienced high levels of illnesses including cancer and thyroid conditions, according to DRN.

The Environmental Working Group, a national research organization that advocates for tougher limits on PFOA and related chemicals, said the efforts by individual states to set their own limits raises questions about whether the EPA’s guidance level – as currently used by Pennsylvania – is strict enough.

“The continued state-level action and the recent announcement from Pennsylvania reflects the inability of EPA to set legal limits for emerging contaminants,” said Dr. David Andrews, senior scientist for EWG, in a statement.

Although it’s unclear whether Pennsylvania will adopt its own MCL, “their action clearly follows a pattern of questioning the adequacy of the federal guidance,” Andrews said.

Last week, New Jersey’s Department of Environmental Protection formally proposed a MCL for PFNA, a related chemical, following the recommendation of its science advisors but some two years after that recommendation was made.

In Pennsylvania, PFOA was used in fire-fighting foam on military bases including those in Bucks and Montgomery Counties where it was found at the highest levels in the nation during EPA testing in 2013-15. A series of recent reports by The Intelligencer revealed the military knew the chemical was toxic and could pollute drinking water as far back as 2001.

The chemical may also be present at hazardous levels in water near other Pennsylvania military bases that used the foam but may not have been picked up by the EPA’s testing which only looked at communities of 10,000 people or more, according to Tracy Carluccio, deputy director of DRN.

She said high levels of PFOA have also been found at a former military base near Harrisburg, and in a water well near Doylestown, Montgomery County.

DRN is calling for Pennsylvania to set a MCL for PFOA of between 1 and 6 parts per trillion (ppt), stricter than the 14 ppt recommended in February this year by New Jersey’s Drinking Water Quality Institute, and the 70 ppt recommended by the EPA. Carluccio said the DRN limit is based on a report by an independent consultant.

Without adequate state or federal regulation, residents may have been exposed to PFOA and related chemicals for years, endangering their health, DRN said in its presentation to the Environmental Quality Board.

“The lack of federal regulation of PFCs means that people have been exposed to PFCs in some cases for years without knowing the risks,” it said.