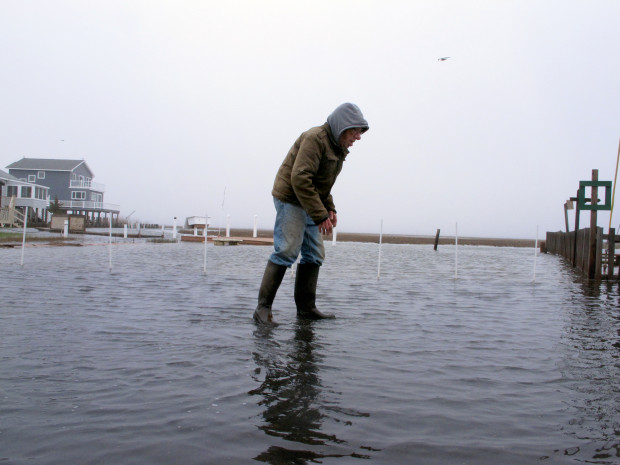 This April 26, 2017 photo shows Jim O’Neill walking through a flooded street in front of his home in Manahawkin N.J. after a moderate storm. He lives in a low-lying area near the Jersey shore, and is often affected by back bay flooding that is expected to increas due to sea level rise. President Trump revoked rules that would have required federally funded infrastructure projects to take rising sea levels into account.

President Trump has rolled back rules aimed at protecting federal infrastructure projects from rising sea levels and dangerous storms caused by climate change. Trump announced the move on Tuesday, at a press conference touting plans to fast track the building of roads and bridges.

Just before engaging in a hostile exchange with reporters over the violence in Charlottesville, President Trump said the current environmental rules governing construction of federal infrastructure projects created delays and costs.

“This overregulated permitting process is a massive, self-inflicted wound on our country,” Trump said standing at a podium in Trump Tower in New York City. “It’s disgraceful. Denying our people much needed investments in their community.”

“It costs hundreds of millions of dollars, but it took 17 years to get it approved and many, many, many, many pages of environmental impact studies,” he said holding up a long piece of paper that appeared to have the approval process mapped out and then shifting to a shorter piece of paper. “This is what we will bring it down to. This is less than two years.”

As part of his broad executive order on infrastructure, Trump revoked an executive order put in place by President Obama in 2015 that bolstered protections for federally funded projects like roads and bridges, from the impact of climate change related flooding.

One group that supports Trump’s move is the National Association of Home Builders.

But environmentalists, planners and climate researchers criticized the move as short-sighted and dangerous.

Franco Montalto is an environmental engineering professor and climate researcher at Drexel University. He is also North American director of the Urban Climate Change Research Network.

“It would be a shame if local governments would have to choose between accepting federal dollars, which allows them to build infrastructure in the first place,” he said, “and accepting those dollars but not building what the scientific community would tell you is a prudent choice.”

Montalto says saving money on the front end could mean having to spend more later when the infrastructure is damaged by floods caused by rising seas or increased storms, like another Hurricane Sandy.

“According to a NOAA report originally published in 2013, and revisited and statistically reconfirmed in 2015, there has been an increasing trend in “billion dollar disasters” in the United States,” said Montalto, “of which more than half of total losses are due to floods, severe storms, or tropical cyclones.”

Coastal communities across the country, including Philadelphia, are already working to shore up existing infrastructure in the face of rising seas and potentially destructive storms like Hurricane Sandy.

“While it is true that climate-proofing infrastructure can be more costly than the cost of building the same infrastructure without considering future climate, it is also true that efforts to reduce climate risks now will reduce the need for disaster relief and recovery,” he said.

A spokesman for the U.S. Army Corps of Engineers said it’s too early to tell how Trump’s new executive order will impact current and future projects.

Christine Knapp, Philadelphia’s Office of Sustainability director says regardless of the President’s executive order, the city will continue to consider the impact of sea level rise on its infrastructure projects.