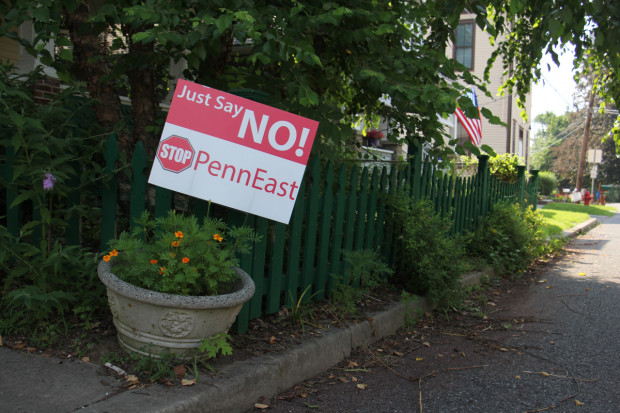 PennEast Pipeline Company urged the Federal Energy Regulatory Commission to quickly approve its controversial plan to build a natural gas pipeline through Pennsylvania and New Jersey now that FERC has a quorum of commissioners for the first time since February.

The pipeline company said in a letter to FERC dated Aug. 10 that it had met all of the agency’s environmental requirements, and noted that FERC already issued its final Environmental Impact Statement for the project, which found there would be no significant impacts.

PennEast also said it has customers for almost 90 percent of the pipeline capacity, and so is looking for the speedy issuance of the final FERC approval – a Certificate of Public Convenience and Necessity that would allow the company to take land by eminent domain if necessary from landowners who refuse its offers of compensation.

“Prompt issuance of an order granting certificate authorizations for the Project is critically important to satisfy the timing expectations of these shippers and to provide timely access to new incremental natural gas supplies for the major Northeastern energy markets that PennEast is designed to serve,” the letter said.

On Aug. 3, the U.S. Senate approved two Trump administration nominees to the agency, giving it a quorum for the first time in more than six months, and allowing it to resume consideration of interstate pipeline projects like PennEast. The nominees were Robert Powelson of the Pennsylvania Public Utility Commission, and Neil Chatterjee, an energy advisor to Senate Majority Leader Mitch McConnell. Chatterjee has now been named chairman of the commission.

The project is now expected to be approved by the agency, which gives a green light to nearly all pipelines that come before it, and is often accused by pipeline opponents of being a “rubber stamp” for the gas industry.

Tamara Young-Allen, a spokeswoman for FERC, said the commission’s next scheduled meeting is Sept. 20, but commissioners can make a decision on any pipeline application outside of a meeting.

“Now that we have a quorum, who knows what could happen,” Young-Allen said.

ReThink Energy NJ, an advocacy group that opposes the pipeline, urged FERC to reject PennEast’s request, and instead to hold an evidentiary hearing on the project.

“This is not the time to rush a decision about PennEast,” said Tom Gilbert, campaign director for ReThink Energy and the New Jersey Conservation Foundation. “The new Commissioners should review the record with an eye toward addressing the many outstanding questions about this troubled project that would need to seize a remarkable number of properties through eminent domain.”

Gilbert said the proposed hearing would address questions about whether the pipeline was needed at all.

The foundation first asked FERC told a hearing on the pipeline last summer, but the regulator never ruled on that request, said Jennifer Danis, an attorney with the Eastern Environmental Law Center, which represents the Foundation.

The motion for a hearing was based on arguments that the pipeline was “self-dealing” in that it would be selling most of the gas to its affiliates, and that there was no demonstrated public need for the pipeline, Danis said.

“As FERC now has a quorum re-instituted, we’re asking that, rather than just pull the trigger on a certificate with such a shoddy record, they grant our motion for an evidentiary hearing and take a really hard look at whether there’s any public benefit for the project,” she said.

New Jersey Rate Counsel, an independent advocate for utility ratepayers, did its own analysis of the project last year, and concluded there was no public need, Danis said.

Even with the expected certificate from FERC, the pipeline would still need permits from New Jersey, Pennsylvania, the U.S. Army Corps of Engineers and the Delaware River Basin Commission.

If finally approved by state and federal regulators, the pipeline will carry natural gas from the Marcellus Shale in Luzerne County, Pa, about 120 miles to Mercer County, N.J.