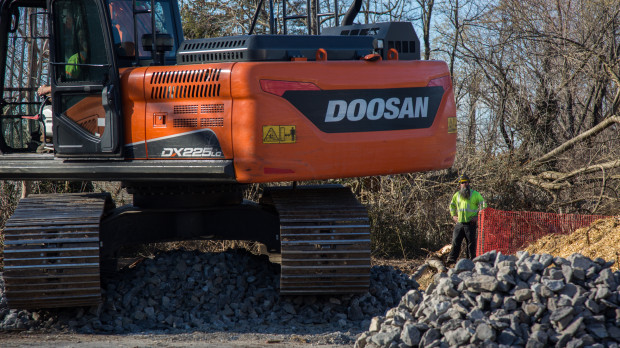 Mariner East 2 pipeline construction in Aston, Delaware County. Construction includes underground drilling along parts of the route. The PUC halted construction of the line in West Goshen Township after finding Sunoco misled township officials on where it was planning to build a valve station.

A judge ordered Sunoco Pipeline to stop work on installing a valve along the Mariner East 2 pipeline route in Chester County’s West Goshen Township, the first time a court has blocked any part of the controversial cross-state project.

Administrative law judge Elizabeth Barnes of the Public Utility Commission late Monday granted an interim emergency order sought by the township to halt construction of the valve and equipment associated with it until a full hearing of the PUC can determine the matter.

The judge ordered Sunoco to “cease and desist all current construction” including that of the valve and its “appurtenant facilities.” She also instructed the company to stop horizontal directional drilling on a private property that the township says is not covered by a 2015 settlement agreement on where a valve may be built.

The ruling is a response to a complaint filed by the township with the PUC in February, alleging that Sunoco violated the agreement, misled the township on where it planned to build a valve station, and exposed residents to “clear and present danger” if there was a leak, the township said then.

The construction ban will remain in place until the full PUC decides the case, Judge Barnes wrote in a 10-page ruling.

Pipeline opponents hailed the order as a big win for communities along the 350-mile line that have been resisting the line because of safety concerns or because of Sunoco’s use of eminent domain to take land from landowners who have refused its offers of compensation.

“This is big news,” said Alex Bomstein, an attorney with the Clean Air Council, which is separately contesting Sunoco’s assertion that the Mariner project is a public utility. “Many people assume Sunoco is invulnerable and Mariner East 2 is inevitable. That has never been true, and this ruling proves it.”

Sunoco spokesman Jeff Shields said he believes the ruling is temporary and automatically goes to the PUC. He said the company has seven days to present briefs and then the PUC has 30 days to decide the matter.

“We look forward to demonstrating to the Public Utility Commission how we have complied at all times with our agreement with West Goshen Township,” Shields said.

The ruling is the latest blow for the pipeline where drilling has recently caused dozens of cases of water contamination, and prompted state officials to issue four Notices of Violations, and imposed a consent decree on the company for spilling tens of thousands of gallons of drilling mud into an Exceptional Value wetland. The $2.5 billion project will carry natural gas liquids from the Marcellus Shale of southwest Pennsylvania to an export terminal at Marcus Hook near Philadelphia. Construction is due to be complete by the end of the third quarter but the latest court order raises more questions about whether that schedule can be met.

David Brooman, an attorney for the township, said the ruling halts all construction work on the pipeline in West Goshen.

“This order effectively directs Sunoco to stand down; to power down all construction activity in West Goshen,” he said.

In the upcoming case before the full PUC, the township will argue exactly what it argued before Judge Barnes, Brooman said, that Sunoco “willfully and flagrantly violated the June 2015 settlement agreement that it entered into with the township, and should be held to its promises.”

In her ruling, the judge said the township had met its legal burden in seeking the emergency order for a halt to construction.

To be granted such an order, a petitioner must show that its right to relief is clear; that the need for relief is immediate; that the injury would be irreparable if it were not granted, and that the relief would not hurt the public interest, the judge said.

She said the township’s complaint raised “substantial legal questions” including whether the agreement required Sunoco to construct above-ground facilities in a specific part of the township, and whether the company gave the township sufficient notice of its plans to move a valve on to a tract of private land.

The judge also determined that the need for relief was immediate because allowing Sunoco to go ahead with construction on one parcel of private land would prevent a development there that would have brought economic and tax benefits to the township. The developer pulled out of the project after Sunoco condemned the land, the judge said.

Barnes also referenced the risks of horizontal directional drilling, and the recent incidents in Chester County where drilling was halted after about 15 families had to stop drinking their well water.

“I find the injury would be irreparable if the injunctive relief is not granted,” she said.

The issue is essentially a contract dispute between Sunoco and the township. But it’s the first time the PUC has weighed in on anything having to do with the siting of the Mariner East 2 pipeline. Although the PUC has authority to grant public utility status to Sunoco, which it has done in this case, it does not have siting authority. Nor does any other federal or state entity.

The question remains whether or not the PUC will enforce the West Goshen contract, says eminent domain attorney Rich Raiders who represents landowners along the pipeline route.

“It’s significant because somebody in the PUC is actually trying to regulate the pipeline,” said Raiders.

He says no matter how the larger PUC body rules in this case, the loser will likely appeal to the Commonwealth Court.