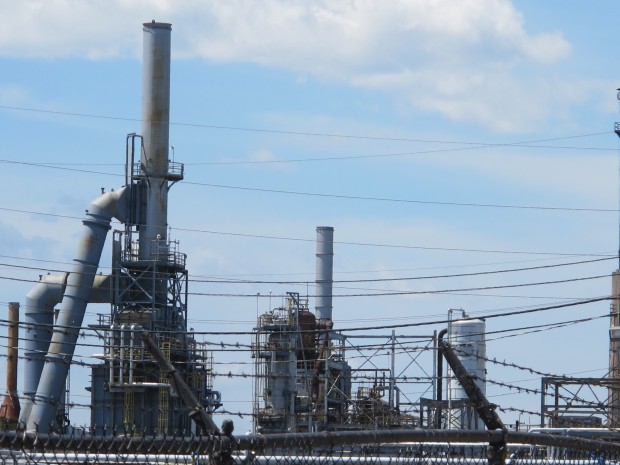 The Sunoco refinery in Marcus Hook, Delaware County. The Mariner East line brings natural gas liquids to the facility through the Mariner East 1 pipeline, which runs through West Goshen Township. The township says the company has reneged on its agreement.

Chester County’s West Goshen Township filed a complaint with the Pennsylvania Public Utility Commission on Friday, alleging that Sunoco Logistics is violating an agreement on a section of its controversial Mariner East pipeline project that runs through the municipality.

The complaint says Sunoco has failed to install a remote-control valve on the existing Mariner East 1 pipeline that runs beneath the township, contrary to a settlement agreement that the company signed with a local citizens group in 2015, setting conditions for construction of a pump station.

The company agreed to build two of the valves but has only installed one, exposing residents to a “clear and present danger” if the pipeline leaks or ruptures, the complaint says.

It accuses the company of having “engaged in obfuscation and provided outright false reasons why the automated valve closure … has not been installed despite the passage of more than two years and nine months since the settlement agreement was finalized.”

The complaint also says Sunoco is planning to install a valve for its planned Mariner East 2 pipeline on a local property that is not covered by the agreement, and without consulting township officials, as it agreed to do.

It asks the PUC to stop Sunoco building the valve, and to remove any other above-ground equipment that’s not permitted by the agreement, or face fines.

The township accuses Sunoco of planning to install the valve more than two months before it signed the agreement in which it said it had no plans to build any more above-ground facilities.

Sunoco rejected the complaint, saying it is in full compliance with the agreement.

“We are disappointed that West Goshen chose to file a complaint, we dispute the allegations contained in the complaint, and we will vigorously defend this action before the Pennsylvania Public Utility Commission,” the company said in a statement. “The Mariner East 1 system is fully compliant with all federal and state safety regulations as currently operated. The automated valve site in dispute was agreed to as a safety enhancement, and the system is currently operating safely at or above those standards.”

Township manager Casey LaLonde said all five township supervisors voted to file the complaint. “We will vigorously advocate on behalf of our residents and urge Sunoco Logistics to honor the terms of the agreement it willingly consented to,” he said in a statement.

The complaint is the latest attack on the Mariner East project, which already pumps natural gas liquids across the state and which would expand its capacity with the proposed Mariner East 2 pipeline from southwestern Pennsylvania to an export terminal at Marcus Hook near Philadelphia.

Mariner East 2 received its final permits from Pennsylvania’s Department of Environmental Protection on Feb. 13 and has already begun construction. Critics say the permits were issued although the company did not meet all regulatory requirements.

West Goshen is among eight municipalities in densely populated Delaware and Chester Counties that have issued public statements in recent months expressing public concerns about the safety of the Mariner East pipelines.

David Hixson, a spokesman for the PUC, said the complaint would be referred, as in all such matters, to an administrative law judge.

This story has been updated with a statement from Sunoco.