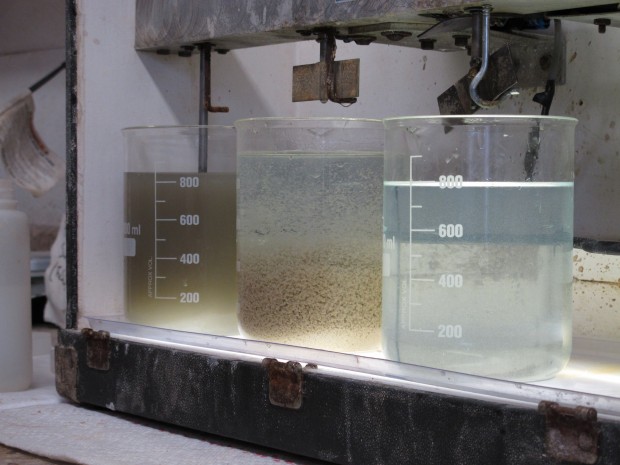 Penn State environmental engineering professor Bill Burgos and his colleagues analyzed sediment samples from the Conemaugh River, a dam-controlled reservoir in western Pennsylvania. The reservoir is downstream from two centralized waste treatment plants, which contaminants from hydraulic fracturing operations can pass through. The study, published this month in Environmental Science & Technology, shows the highest concentrations of pollutants were deposited in the reservoir’s sediments five to 10 years ago, during the peak of Marcellus Shale activity; they include endocrine disrupting chemicals and carcinogens.

Burgos says it’s not yet clear how the pollution may affect human health or the broader environment.

“How dangerous is that material? That’s still an open question,” he says. “That’s difficult to know.”

Borgos says he and other researchers were able to link the contaminants to unconventional gas development by tracing the unique signature of the shale formation.

“The key environmental forensic evidence hinges on the isotopes of radium and strontium,” he says. “Isotopes of those two elements are the best indicator that the fluids in that most contaminated layer had some relationship or origin to Marcellus Shale.”

He says future research may shift further downstream, to see if this signature can be detected at lock and dam systems closer to Pittsburgh.

The good news, according to Borgos, is the study shows a significant decrease in contaminants, resulting from a 2011 request by state environmental regulators for drillers to stop disposing their wastewater in municipal sewage and commercial treatment plants.

“This voluntary ban that the [Department of Environmental Protection] requested turned out to have a direct impact on improving sediment quality,” he says.

Since then, Burgos says the natural gas industry has become much more successful in recycling its wastewater.