PA, Philadelphia will press on with climate policies despite Trump withdrawal from Paris pact 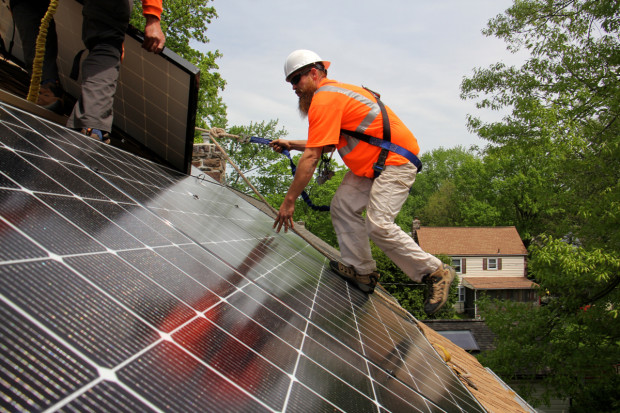 Solar panels are among Philadelphia's ways of cutting carbon emissions to meet the goals of the Paris climate accord, despite President Trump's withdrawal from the pact..

President Donald Trump’s decision to withdraw from the landmark Paris climate accord isn’t likely to derail Pennsylvania’s efforts to curb methane emissions, and it strengthens Philadelphia’s determination to set its own climate policy, officials said.

Trump’s rejection on Thursday of the historic agreement to stop global temperatures rising more than an average of 2 degrees Celsius above pre-industrial levels prompted howls of protest from other signatory nations but is expected to result in business as usual in Pennsylvania.

State officials said the administration of Gov. Tom Wolf, a Democrat, would press on with its efforts to cut escapes of methane – a potent greenhouse gas – from natural gas wells and pipelines.  Philadelphia officials were expected to continue their drive to reduce carbon emissions and prepare for the higher temperatures and bigger storms that are forecast to come with climate change.

“Climate change is a global issue that needs cooperation at all levels, from international agreements down to local efforts to conserve energy and reduce greenhouse gases,” said Neil Shader, a spokesman for the Department of Environmental Protection, which implements climate policy. “While withdrawal from the Paris agreement will not directly impact specific DEP policies, climate change is still an issue that is already affecting Pennsylvania.”

In Philadelphia, Democratic Mayor Jim Kenney issued a statement saying that the city would continue its efforts to cut carbon emissions to match the requirements of the international pact.

“President Trump’s decision to withdraw from the Paris climate agreement goes against the interests of Philadelphians,” Kenney said. “My administration is now committed to upholding at the local level the very same commitment made by the United States in the Paris climate agreement — to reduce carbon emissions between 26 and 28 percent by 2025.  This will ensure that we’re well on our way to meeting Philadelphia’s current long-term goal of reducing the city’s emissions 80 percent by 2050.”

Kenney said Philadelphia would be one of about 60 U.S. cities working to meet the standards set by the Paris agreement.

“The bottom line is that the Paris accord is very unfair at the highest levels to the United States,” Trump said.

He said some of he other 194 countries that have signed the agreement would be able to gain financially, at the expense of the United States.

“This agreement is less about the climate and more about other countries getting a financial advantage over the United States,” he said.

“We are getting out but we will start a negotiation and we will see if we can make a deal that’s fair,” he said.

In Harrisburg, the Wolf administration’s climate efforts previously focused on a plan to cut power plant emissions, as required by the Clean Power Plan, an Obama-era rule.

But compliance efforts halted after the U.S. Supreme Court halted implementation of the plan in February 2016, and Trump issued an executive order to review the rule in March this year. As a result, Pennsylvania’s climate policy is now focused on reducing methane leaks from natural gas operations.

That’s being opposed by some state lawmakers who want to ensure that Pennsylvania’s restrictions on methane leaks are no stricter than those required by the U.S. Environmental Protection Agency. Any tougher limits would reduce state competitiveness and cost jobs, according to supporters of SB 175, a bill that aims to lessen the impact of the methane rule.

Rep. Greg Vitali, a Delaware County Democrat, said many lawmakers in the Republican majority of both state houses already oppose the methane restrictions proposed by the Wolf administration, and so Trump’s decision to abandon the Paris agreement is unlikely to make a lot of difference.

“The resistance is there already,” Vitali said. “It’s difficult to get positive things done on climate.”

Steve Miskin, a spokesman for the House Republicans, said he expects the state will continue to pursue climate policy, as required by a 2008 state law under which the DEP must make two reports on climate change every three years.

“Pennsylvania’s 2008 Climate Change Act requires the Commonwealth to have its own plan independent of federal polices and international agreements,” Miskin said. “We have made significant reductions in greenhouse gas emissions in Pennsylvania and it’s expected we will continue to do so.”

The state reduced carbon emissions by some 11 million metric tons from 2000 to 2012, according to DEP data, largely because of the price-led switch from coal to natural gas as a fuel for generating electricity.

With the federal government now turning its back on international efforts to cut emissions, advocates say there is an increased need for states and cities to strengthen their own efforts in the hope of avoiding the worst effects of climate change in coming decades.

“This underscores the absolute necessity of states and cities taking the lead from a public policy perspective” on climate policy, said former DEP Secretary John Quigley.

As the nation’s second-biggest natural gas producer, Pennsylvania has a special responsibility to lead efforts to curb emissions, Quigley said.

But he warned that Pennsylvania’s emissions could begin to rise again if nuclear plants like Three Mile Island close, renewing opportunities for coal. Three-Mile Island’s owner, Exelon Corp., said this week that it will close the plant in 2019, 15 years before its operating license expires, in a market dominated by cheap natural gas, growing renewables, and slowing demand for electricity.

“Right now, we are benefiting from the switch from coal to gas because of market forces,” Quigley said. “But if the nukes go away, PA’s emissions are going to rise, and the positive trend we are seeing because of shale gas could be reversed in a very significant way.”

Advocates for the U.S. to remain a part of the global climate agreement hailed Wednesday’s vote by shareholders of Exxon Mobil for an open assessment of how the company’s business is affected by climate change policy such as the Paris accord.

U.S. Senator Tom Carper of Delaware urged President Trump to note that a majority of company’s shareholders recognize the threat to profits from climate change, and are directing the company to take the issue seriously.

“Today, the shareholders of one of the world’s largest producers of fossil fuels, Exxon Mobil, have recognized this very fact,” Carper, a Democrat, said in a statement. “This is a victory, and I hope it’s a sign that the small minority of people who remain unconvinced on this issue are ready to face reality.”

Ahead of Trump’s scheduled announcement of his decision, Gov. Wolf urged the president to keep America in the Paris pact.

“Many of America’s largest corporations – from energy to technology – agree with environmental advocates, faith leaders and scientists that staying in the Paris agreement is the right choice for America,” Wolf said in a statement. “We cannot ignore the scientific evidence and economic significance of climate change and put our economy and population at risk.”