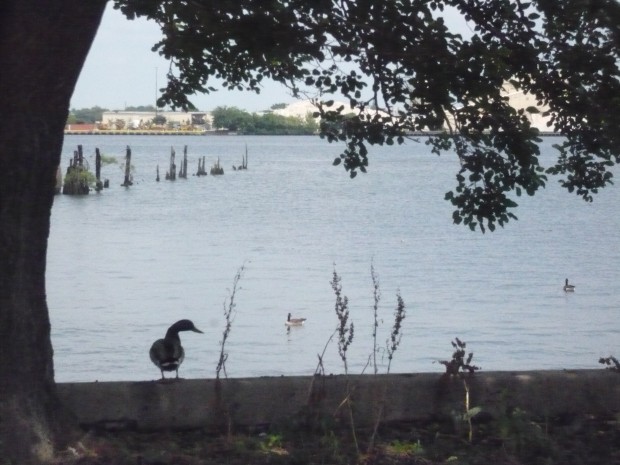 Plans to build a hazardous waste processing plant in Bucks County are opposed by environmentalists who say it risks the health of the Delaware River at downstream sites like this at Washington Avenue Green Park in Philadelphia.

Pennsylvania on Tuesday again delayed a controversial project that would recycle hazardous waste in Bucks County, saying that a permit application was incomplete.

The Department of Environmental Protection said part of the application by Elcon, a processor of waste from industries including petrochemicals, pharmaceuticals and semiconductors, had not submitted the required information in six categories, and so was “administratively incomplete.”

Officials asked the company to resubmit the application – the second part of a multi-phase process that seeks state approval for the plant – but did not set a time by which a new application must be made.

The plan for a 70,000 square-foot recycling facility on a 22-acre site in Falls Township, Bucks County has been opposed by environmentalists who say that the plant would be too close to the Delaware River which could be endangered by any spill of contaminants, whether caused by human error or by flooding that results from climate change.

“DEP remains committed to the thorough, rigorous and transparent review of this application,” said DEP Southeast Regional Director Pat Patterson, in a statement. “These are applications that can be very complicated, and I applaud our staff for ensuring that we have all of the information that we need before moving forward with a technical review.”

The company, based in Israel, made its first application to DEP in March 2014 when it sought approval for the location of its planned facility. That application was initially rejected on the grounds of insufficient information but was finally approved in November, 2015, allowing the company to move to the current phase, said Virginia Cain, a DEP spokeswoman.

The latest document is not a denial, Cain said, but is seeking additional information on areas such as storm-water management; legal ownership of the land where the plant would be built, and geological information based on professionally accepted standards. Neither is the latest action an assessment of Elcon’s proposed activities at the new plant, she said.

“We’ve returned the application, telling Elcon, ‘You have to address these six deficiencies before you can resubmit the application,’” Cain said. If and when all the information is received, the DEP will then begin a 10-month technical review that will assess Elcon’s proposed operations.

Elcon officials could not be reached for comment on the DEP’s latest decision, but the company’s web site says that the proposed facility would be outside any wetlands; will not discharge into the Delaware River, and would be virtually free of airborne contaminants.

The facility would not accept waste that is radioactive, or that comes from oil and gas fracking, according to the website.

The project will create up to 200 construction jobs and some 175 permanent jobs in its first two phases, Elcon said. It argued that its presence as the first hazardous waste recycling plant on the U.S. East Coast would encourage more businesses such as pharmaceutical companies to locate nearby rather than shipping their waste hundreds of miles by rail or truck, as at present.

“We’ve been arguing throughout this process that Elcon has not been providing the quality of information necessary to objectively and fully look at the implications of this project,” van Rossum said. “The fact that DEP has gone back to them and said that they too want more information is significant.”

She said the DEP’s action indicates that it is looking more critically at the project, and means that time will be added to the project, delaying any startup, and giving opponents more time to collect information.

“Time provides more opportunity to make that case that this is the wrong project in the wrong place,” she said, referring to its proximity to the Delaware River.