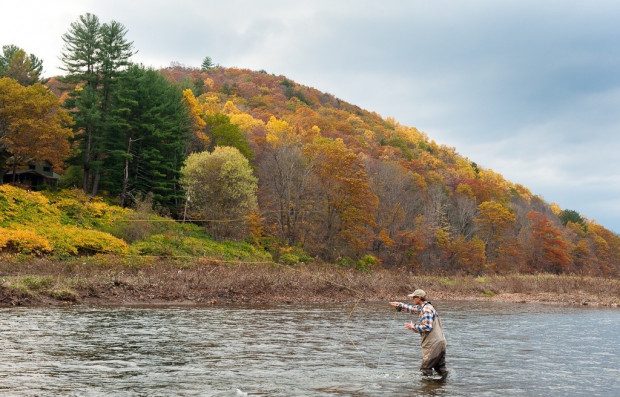 Dan Plummer fishes for trout in the Delaware River, Delaware County New York. The Delaware watershed hosts world class trout fisheries. But a dispute over water allocation between New York City and New Jersey could put those fisheries in jeopardy.

The upper part of the Delaware River hosts some of the world’s best trout fishing spots. The river also supports humans – about 16 million people living in New York, New Jersey, Pennsylvania and Delaware share the river’s water. Now a lingering battle over how to divvy up the water between New Jersey and New York City has anglers and environmentalists worried.

The bureaucratic wrangling is over agreements made under a 1954 Supreme Court decree on drinking water withdrawals allocated between the city of New York and the four states that draw from the Delaware. And there’s a looming deadline. If the parties don’t agree by Wednesday evening, water releases from the New York reservoirs revert to an old water management system that conservationists say could hurt fisheries, aquatic ecosystems and flood mitigation.

Carol Collier is the former director of the Delaware River Basin Commission and is now the senior adviser for Watershed Management and Policy the Academy of Natural Sciences Drexel University. Collier says for the past five years, the five parties have agreed to yearly allocation plans. But there’s always been a push to come up with a more longterm solution for how the four states and New York City share the river water, while also mitigating floods and protecting trout fisheries in New York and Pennsylvania.

Without what’s referred to as the “Flexible Flow Management Program” or FFMP, the water allocations revert back to a plan worked out in 1983. Environment and conservation groups say that old plan does not incorporate updated scientific data and state of the art resource management.

“Compared to what they are doing now to support fisheries and endangered mussels,” said Collier, “it’s quite draconian. It doesn’t have half the benefits that the plan has now.”

Trout fisherman are especially worried. Trout thrive in cold water, where they rise to the surface to snatch up insects. The upper Delaware watershed supports world class trout fisheries that generate more than $300 million in economic activity, according to Dave Kinney, a spokesman for the conservation group Trout Unlimited. But Kinney says that without the releases of cold water from New York’s reservoirs, parts of the upper Delaware would become too shallow, and too warm, to support the fish.

“You’d have days out there where the fish would be confined to shallow water,” said Kinney. “It would really be a shadow of what the experience was like when I was (fishing) up there last month, where you had enough water to float and rising fish, and it was a beautiful experience.”

Lower water levels resulting from New York City releasing less water according to the 1983 water management plan would also impact campers and recreational boaters in New York and Pennsylvania who use the river in summer months.

The disagreement revolves around New Jersey’s decision not to sign onto the FFMP agreement this year unless New York City agrees to relinquish some of its current water allocation. And New York City isn’t budging, saying the city doesn’t have the extra water New Jersey claims it does.

New Jersey says the city has reduced its water usage over the past decades, and there is excess capacity that New Jersey officials say the state is entitled to based on the original 1954 Supreme Court decree, which came about after the states spent years battling over water withdrawals for a growing population. But today, conservation efforts and reduced manufacturing activity has helped reduce water consumption in the entire basin, including New York City.

“We’ve been trying to negotiate this for five whole years and we believe we can get to a better agreement,” said Dan Kennedy, assistant commissioner for water resource management at New Jersey’s Department of Environmental Protection. “We’ve done modeling in the basin that shows sufficient water supply. And we don’t believe that New York City has the right or ability to withhold our access to upwards of 100 million gallons of water a day.”

Kennedy says New York City has been unreasonable at the negotiating table, which because it’s part of a court settlement is not open to the public. He also says the Garden state doesn’t benefit from trout fishing, and it would still get the same allotment of water under the antiquated management system as it does under today’s flexible flow plan.

Kennedy says all parties can benefit from a longterm reallocation.

“New Jersey is not looking to be unreasonable here,” he said.

New York City officials say it’s New Jersey that’s solely responsible for putting the river’s ecosystem at risk. And they say the city is not hoarding water it does not use.

“We disagree with that wholeheartedly,” said Adam Bosch, a spokesman for New York City’s Department of Environmental Protection. “We do not have some glut of water hanging out there.”

“We’ve tried to put together really constructive ideas to get everyone what they want and what they need,” he said. “There’s only one party willing to throw out decades of science and modeling and that’s New Jersey.”

Bosch said the city has already signed on to another year of the current water management plan.

New York State Department of Environmental Conservation spokesperson Erica Ringewald said the state is still at the table and willing to sign on to the current plan.

“New York State has, and will continue to, work diligently with the Decree Parties to achieve an equitable agreement on an environmentally appropriate water management plan for the Delaware River Basin,” she said in an email. “In the absence of unanimous agreement, New York State is willing to sign an extension of the existing plan, “FFMP,” to avoid potential harm to the river and its interests.”

It’s unclear where Pennsylvania and Delaware stand on the issue.

Pennsylvania Department of Environmental Protection Neil Shader said in a statement that it “has been working in good faith over the past year to continue to build on the success of the Flexible Flow Management Program and improve the health of the Delaware River.”

Delaware officials did not respond to a request for comment.

Maya van Rossum, with the Delaware Riverkeeper Network, says the health of the river is at risk because of politics.

“Part of the problem in all of this is there’s been a lot of political gamesmanship,” she said. “There’s been posturing and politicking.”

Van Rossum says her group wants to see a long term plan, but also says New York has been a good steward of the Delaware River, and worries about the impact of reverting back to the 1983 water management plan should the parties not come to an agreement on time.