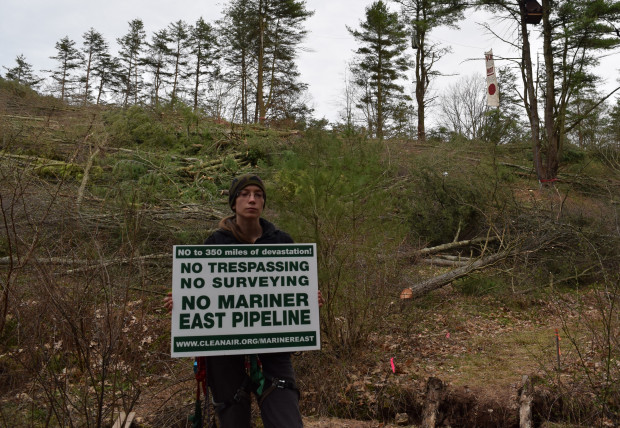 Elise Gerhart, daughter of Ellen and Stephen Gerhart, stands with a protest sign by an area of tree-clearing on her parents land. The Gerharts' lost their appeal to the Commonwealth Court. Although trees have been cleared, construction has not yet begun.

A Huntingdon County family who have become vocal opponents of Sunoco’s Mariner East 2 pipeline project has lost an appeal to Commonwealth Court over the company’s taking of their land through eminent domain. The appeal by Stephen and Ellen Gerhart of Union Township is just one of about a dozen cases pending before the Commonwealth Court challenging takings by Sunoco for the 350-mile natural gas liquids pipeline project.

“The court’s recognition that Sunoco Pipeline is a public utility providing public benefits through its Mariner East 2 project is consistent with its prior ruling and every decision rendered by the lower courts,” he wrote in an email.

Given the number of cases and the issues involved, it’s hardly the last word from the court system on whether Sunoco should have been granted eminent domain authority in building a pipeline to carry natural gas liquids, most of which will be exported.

The Gerharts had hoped that a Pennsylvania Supreme Court decision regarding eminent domain last fall would give them greater leverage in their appeal, but the majority of the three-judge panel rejected their argument.

Last September, the Pennsylvania Supreme Court ruled in the landmark Robinson Township case, which overturned aspects of the state’s new oil and gas law Act 13, that the legislature could not grant eminent domain authority to companies building gas storage facilities. The court’s decision hinged on the fact that the public was not the “primary and paramount” beneficiary, as the state had claimed.

“Instead, it advances the proposition that allowing such takings would somehow advance the development of infrastructure of the Commonwealth. Such a projected benefit is speculative, and, in any event, would be merely an incidental one and not the primary purpose for allowing these takings,” wrote Supreme Court Justice Debra McCloskey Todd for the majority.

Although neither the Supreme Court decision, nor the Robinson Township case, addressed pipelines directly, the Gerharts argued that it applied. And they argued the public is not the primary and paramount beneficiary to the Mariner East 2 pipeline.

The Gerhart’s attorney Rich Raiders says his clients have several options to appeal Monday’s ruling by the court but have not yet made a decision.

“The Gerharts are very disappointed that the excessive takings analysis was lacking in the majority’s opinion,” said Raiders.

“In the present matter this court is again “striving mightily” to interpret something in a way that strains credulity and, I suggest, will face the same fate as our decision in Robinson IV,” wrote Cosgrove.

Widener University environmental law professor John Dernbach says the issue as to whether or not the Supreme Court’s recent eminent domain decision applies to pipeline cases like the Gerharts’ is not going away.

“If these cases wind up in the Supreme Court that’s going to be an issue,” Dernbach said.

In the meantime, although construction is moving ahead in Huntingdon County, Sunoco has not yet begun work on the Gerhart’s property.