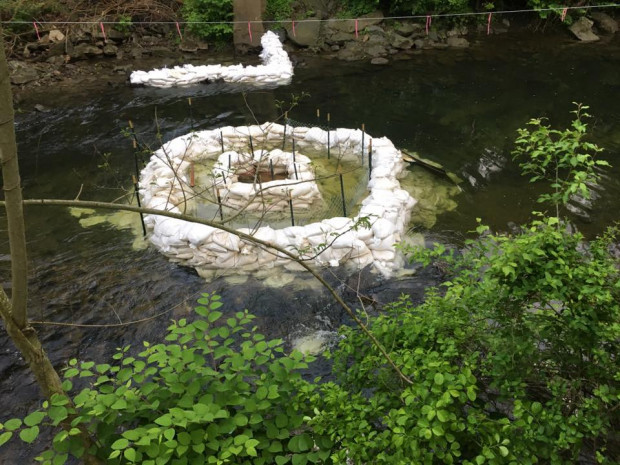 Sand bags placed to contain a leak of bentonite clay into Chester Creek in Brookhaven, Delaware County. This month Mariner East 2 pipeline construction resulted in the release of an estimated 575 gallons of bentonite, which is commonly used as a lubricant for horizontal directional drilling.

Pipeline construction of Sunoco’s Mariner East 2 has caused three separate releases of drilling mud in May, with two incidents resulting in a combined total of 575 gallons of bentonite clay entering Chester Creek in Brookhaven, Delaware County, according to Sunoco Pipeline spokesman Jeff Shields. Bentonite is a non-toxic substance commonly used as a lubricant in horizontal directional drilling. Substantial amounts of bentonite released into waterways can impact aquatic life, especially organisms that live on the bottoms of streams and wetlands.

No fish were killed as a result of the leaks, referred to as “inadvertent returns,” according to the Pennsylvania Department of Environmental Protection.

Sunoco Pipeline spokesman Jeff Shields says the company doesn’t “anticipate any harm to the environment” resulting from the releases.

“Inadvertent returns of bentonite mud are an occasional component of directional drilling operations,” wrote Shields in an email. “Due to subsurface conditions and other geologic conditions of the locations, drilling mud is sometimes able to migrate through naturally occurring fractures in the soils and return to the surface.”

A similar incident occurred recently in Ohio where two million gallons of bentonite clay inundated a wetland during the construction of the Rover Pipeline by Energy Transfer Partners. The company recently merged with Sunoco. The Ohio EPA fined the company $431,000 and the Federal Energy Regulatory Commission shut down construction on the project last week.

Eric Friedman, a spokesman for the Middletown Coalition for Community Safety, a group of residents opposed to the Mariner East 2 project, said Sunoco documented risks to water supplies in its permit filings with the Pennsylvania Department of Environmental Protection.

“As we’ve seen in this latest accident, those risks are not hypothetical,” said Friedman. “Given their history I think we’ll see more of these.”

On May 3, 500 gallons of bentonite made its way through a storm drain into Chester Creek in Brookhaven, according to Sunoco. The next day, the company says 30 gallons of the mixture was released but workers prevented it from running into the creek.

An inspector from DEP visited the site on May 4, reporting the company had the spill under control and was in the process of cleaning it up. In an email sent to his supervisors, the DEP’s Christian Vlot wrote that “they lost 20,000 gallons of fluid over the past few days so who knows where that went.”

On May 10, 75 gallons of bentonite seeped up from the creek bed, which was contained with sand bags and then vacuumed, according to Shields.

Environmental geochemist Marie Kurz, who runs the geochemistry section at the Academy of Natural Sciences, says bentonite is a natural clay material often used in kitty litter and does not pose a chemical hazard to plants and animals. But Kurz says releases can impact water quality and a stream’s ecology. The clay can cause turbidity and cloudiness, which in large concentrations can cut off light to plants and smother macro invertebrates, snails or salamanders that live on the bottom of streams.

“Streams are resilient,” said Kurz. “A day or so of cloudy water and [aquatic life] can do fine. But weeks or months could eventually have an effect on the stream.”